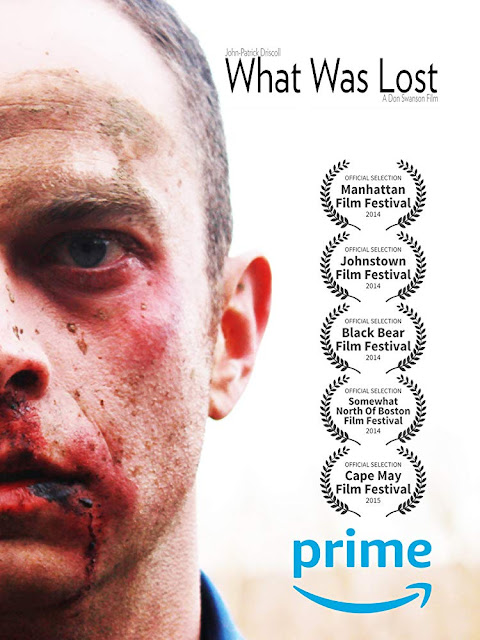 What Was Lost is a 24 minute short film that is horror's version of the classic gangster film The Long Good Friday. Not so much with what happens remotely, more that over the course of one day a man's life is ripped down and shattered. While this movie is a few years old now it has recently been released on Amazon Prime, last December in fact. This was directed by Don Swanson who also directed A Wish for Giants.

Joel (John-Patrick Driscol who wrote the dialogue here) has the perfect life. He is married to a beautiful woman, has a well paid prestigious job, and is on the verge of finding a valuable manuscript thought lost to time. Over the course of one day his world is destroyed irreversibly...

Well, isn't this bleak! Starting out I wasn't entirely sure what sort of movie this would be, I always try and keep anything I watch fresh by not reading anything about it beforehand. I figured this may be supernatural due to the search for the manuscript. Instead this is more a thriller that deals with the very human side of existence. The cast is mostly focused on three main characters. First there is Joel, a protagonist who we only see the bad side of, his breakdowns, his misery and his suffering. Yet by his wrongs he is someone you can root for. The other characters include Elsa Carette as Brandi who plays a woman obviously unhappy with her situation in life but who comes across as a bit one dimensional. Anderson (Dustin Kyle) is the third main one who plays a pivotal role in the proceedings and brings a bit of dark humour.

I was interested where the story was going to go, yet I can't say I felt satisfied with where it ended up. This is due to the short taking a slightly more realistic approach with this not being some grand revenge thriller, instead this is quite a morose piece that ends on a real downer, but one which is executed well. To be fair the final shot was something special, especially with the voice over. There were some elements I really liked, a dream sequence fading back to reality was one such part I thought worked well. The score is also great throughout, piano led, it combines to give some decent atmosphere.

What Was Lost was a good enough drama piece, it had a nice central performance, a good soundtrack and some nice ideas, but it isn't something I think I would ever feel the need to go back to now that I have seen it.