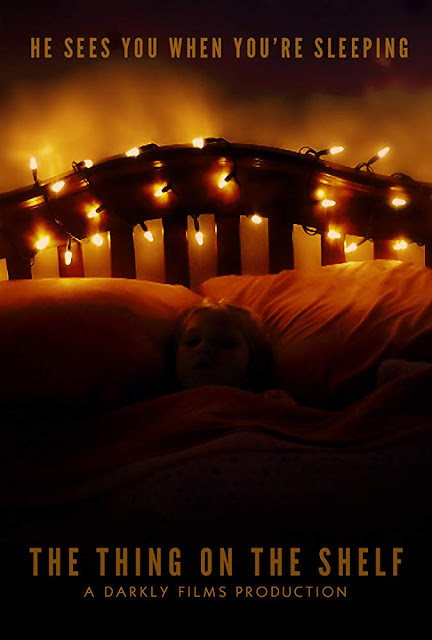 It's been an odd week for my blog in that I have had all the time in the world to be doing blog posts, yet for whatever reason I never got around to doing them. Not really good seeing as how I still have a Christmas backlog to clear. My last review was of Mikal's No Lives Matter, and now it is the turn of another short of his - The Thing on the Shelf which he also wrote and directed.

It is close to Christmas and a mum (Jill Kathryn Lemond) has given her daughter (Aila June Lemond) an elf doll to sit on a shelf in order to make sure she doesn't misbehave. In the middle of the night the girl wakes up to a sudden noise...

I don't really understand the whole elf on the shelf thing that seems to be popular nowadays but regardless of that bit of new child Christmas lore I found this short to be effective. This is just over a minute long but managed to be creepy. I have an unexplainable mild phobia of puppets and so I could feel my skin crawl towards the end of this. As such in my eyes it is a success! The child actor gives an understated performance, while the short length means the zinger is just enough to make you create the rest in your mind. Also I liked that the music goes off key once the horror starts to happen.

In terms of originality this wouldn't win any awards. However The Thing on the Shelf was well put together and was effective as a tiny Christmas horror. With such a short length it is worth a watch.

Posted by Daniel Simmonds at 09:07