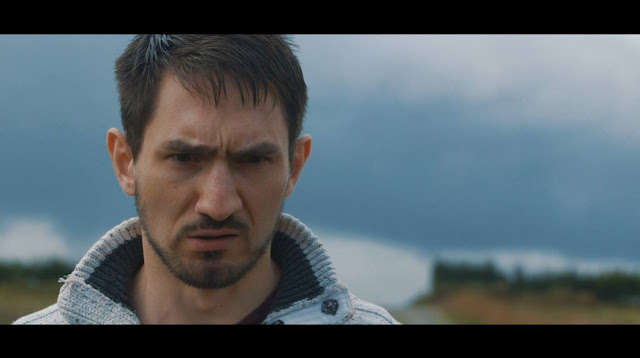 The Road is a short zombie film that was written, directed, produced and edited by Philip Martin, who also did the cinematography here. I often get the nagging feel that I don't watch enough zombie films anymore, something I feel I should do more of seeing as how it is my favourite genre of horror.

A lost driver (David Parker) finds himself on a remote dirt track that runs alongside a chemical plant. Seeing a body on the road in front of him he stops to see if he can offer aid. This charitable act however may well be the very last thing he does...

Putting the out of place upbeat intro credit scene music to one side The Road creates a real feeling of atmosphere from the start to the very finish. This is achieved I feel with how silent the characters here are, in fact this is almost silent until a perfectly timed interruption. Throughout there is a great ambient track which goes so well with the visuals on screen. It creates a feeling of strangeness, of oppressive otherness that for me just brought forward nostalgic memories of the classic Italian zombie films of the 1980's, though with a quality of filmmaking that those could never be said to have.

Meanwhile the makeup for the zombie creatures was fantastic, it was the right shade of colour to call back to me George Romero's Dawn of the Dead, the female zombie (Megan Robson) seeming like she had walked (shambled?) right in off that movie set. Almost like a quasi contrast you have Daemon Lee as an alternate undead type, one more aggressive in its actions. This is all held together by the lovely camera work of Martin with this being high quality throughout.

At under five minutes long this is something I watched quite a few times in a row, the blending of the visuals and the music were what appealed to me the most. This was apparently filmed over just one day with zero budget and so that makes this all the more interesting to watch. The Road is a dream like short that has really made me want to go back and visit the old zombie classics. Check it out for yourself below.

Thanks for the review, glad you liked it ;)