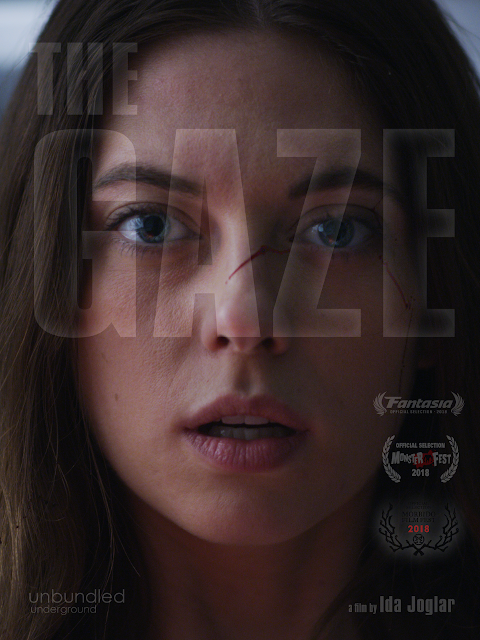 The Gaze comes from Ida Joglar who is a filmmaker, editor and video installation artist based in New York. It feels very current in that it fits in perfectly with the #MeToo movement despite being written and shot before that even started, and was based on the directors personal experiences.

Mayra (Siri Miller) is a lab assistant who finds herself sexually harassed by her boss one night while working late. The stress of the event awakens a latent psychic power within her that she puts to good use the next time it happens.

This short horror is obviously making a point. By showing two differing encounters with men in different situations it deals with things that could be seen as nothing, but also could be something. Mayra's best friend plays Devil's advocate throwing out possibilities, but these are used for the protagonist to refute. The culmination of this horror is the literal neutralising of male superiority with the empowerment going to the victim.

This was very well made and with a great performance by Miller. Environments look natural and sterile that puts focus onto the characters themselves. The special effects are effective with the limited times they are used. The plot itself is simple by design but it works as a way to show one such view of what it can be like to be a female in the modern world. I will say that I'm not quite sure of the physics of the ending, I guess you could put it down to the powers of psychic abilities. Regardless it led to a memorable end. The Gaze came out exclusively on ALTER on 13th December last year.

Posted by Daniel Simmonds at 15:57