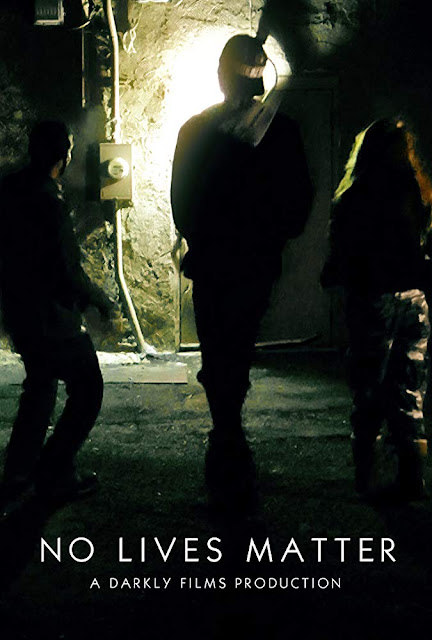 I have a couple of short horror films brought to my attention by Darkly Films, as they are both only a minute long each I bumped them up to the top of my list. No Lives Matter is a short zombie tale that was entered into the Filmstro & Film Riot One Minute Short Film Competition. Director/writer Mikal is no stranger to having to make use of limited time as in the past he has put entries into the even more constrained 15 Second Horror Film Challenge.

Undead apocalypse has swept the city and a band of survivors are fleeing the rotting dead. They end up seemingly trapped in an alleyway and with the ghouls approaching it looks like the end may be near...

I had to watch this short quite a few times to cotton onto just what is happening here, but finally I understand and as a result has made this better, The title is a play on the 'black lives matter' slogan which feeds into this to give better context. This is a comedy horror which only become apparent once I had deciphered this message shown.

The visuals are all really blurry, intentionally so as the camera is focussed on a particular part of the screen meaning all around is fuzzy. This coupled with the great eighties sounding synth soundtrack and editing that cuts moments out leads to something that felt well put together. If I had one complaint it would be that the make-up for the zombies is not consistent, and one of the much younger undead does look quite happy rather than menacing in a lot of the shots she appears in. Still, all in all not bad at all.  Check it out for yourself below.