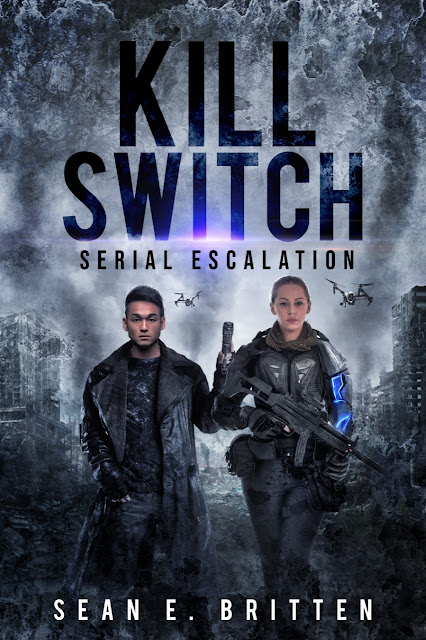 Kill Switch: Serial Escalation is the fourth book of Sean E. Britten's I have read. While I was gifted a copy of this by the author I couldn't get it to work on my eBook reader and so ended up deciding that as I enjoyed the first in the series - 2016's Kill Switch that I would just buy this one as I assumed it would also be good. For those unfamiliar with that first book this series takes place within the confines of a Battle Royale type game show where contestants are made up of the most dangerous criminals who have to fight each other to the death. While this is a sequel there is only the one returning character so spoilers shouldn't pop up too much here. If you haven't read that first book then you should do as it was pretty great, but then the 'Battle Royale' genre is one that I adore currently in my life.

Thao wakes up with no memory of who he was and soon discovers he is a contestant on the latest game of Slayerz (America's favourite bloodsport!). He is partnered up with cyborg and ex-soldier Layla Jackson and together they have to survive the game. The rules are simple, contestants are paired up and have to fight other pairs in a large arena, the last ones alive win. To make things more difficult each contestant is fitted with a special device on their arm, should their partner die then their 'kill switch' will engage eventually killing them also. Initially wary of each other Thao and Layla soon form a bond, Thao convinced that he isn't the sordid monster the show reels made him out to be. Together they go looking for answers for just who he really is, while trying their best to defeat any who come against them.

My hopes for this sequel were not too unrealistic, I was perfectly happy if it was just another year on the Slayerz gameshow. Thankfully that is exactly what I got. It was funny but when I was thinking of all the negative aspects of this book I realised that the majority of them were to do with the changes to Slayerz itself. Adding monsters and robots I felt got in the way of the humans killing each other, while the late addition of extra contestants felt cheap. These criticisms though were not against Britten, but against the fictional company in charge of Slayerz, I found that to be pretty funny when I realised I was reacting as a viewer. That also made me sheepishly realise that if this was an actual show...I would probably watch it! I don't know what that says about me. With the first book the protagonist was not an innocent, and the person he was teamed up with was very nasty. This time around it felt different just by having two main leads who were not bad people. Layla in particular came to be a character I loved, just the idea of someone with a hulking great metal arm was awesome.

A lot of what happens here is almost a re-run. You have the same amusing twisted fake adverts that start off each chapter, the same game in many regards, such as the kill switch aspect, supply drops, and traps everywhere. It even ends slightly similar, this time even more on a note that felt directly lifted from Battle Royale, and of course there is the same constant The Running Man feel to this that pervaded the first novel. I wanted more of the same and that is what I got and so it was impossible to be disappointed with this. The various duos roaming the arena were almost as interesting as before. This time around though there were a couple of duos who really stood out. One pair only featured in a single chapter but was perhaps my most favourite part of Serial Escalation. A large slow guy armed with a shotgun teamed up with a fast free-runner armed with a grapple gun: they were the perfect odd pair. Over a single chapter these two really come to start working together as a proper unit. I loved how invested I got in their story. My most vivid memories of this book are them, thinking back it is almost like I am playing back a movie in my head, I can see it all clearly.

I liked the fact that not all the contestants were evil scum this time, there were a whole bunch that seemed on the right side of good. From the end of the first book I had assumed that the winner of that one would be returning (likely against his will) but the decision to have this unrelated at all, aside from highlight reels of that years show, and the producer character Roland returning led to a brand new story being able to be told. As always the plot doesn't feel original, but it sure is damn exciting to read. There is a flow to the action that lays it out neatly in your mind. A genuine issue I had I guess would not be to do with how this was written, but more how some of the more interesting antagonists were dealt with. There were three characters in particular whose fates were pretty much identical, it was a shame they didn't get to have more impact on events as especially the lone wolf character felt like great things could have occured with him later on. On the flip side there is a mech with a dog like intelligence that I loved!

Kill Switch: Serial Escalation did exactly what I hoped it would do. While less surprising than before this was still a very enjoyable read. Britten has yet to write a bad book judging from the ones I have read, and so I look forward to seeing what comes next from this author.