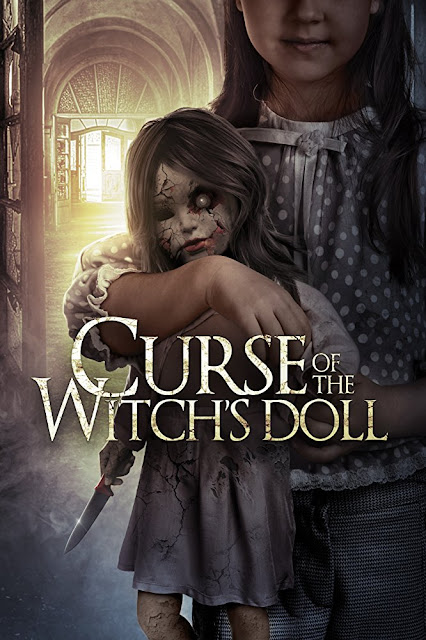 Curse of the Witch's Doll is a low budget horror that at first I was ready to pass off as not really worth a view at all. However the more I watched the more I found myself not minding what I was seeing. The plot goes to some unexpected places, while among the small cast there were a few actors who I really enjoyed watching.

It is 1942 and Adeline (Helen Crevel - KillerSaurus) and her daughter Chloe (Layla Watts) have gone to live in the countryside after their house in Kent was destroyed by a bomb, a place to live which has been arranged by the mild mannered Arthur (Philip Ridout - Dogged). Soon after moving in strange occurrences start happening, doors shut on their own, and Chloe befriends a sinister looking doll she finds. Then one day while out in the woods Chloe vanishes into thin air, Adeline starts to believe that she has been taken away by the spirit of a witch that she believes resides within the creepy doll found in the house... 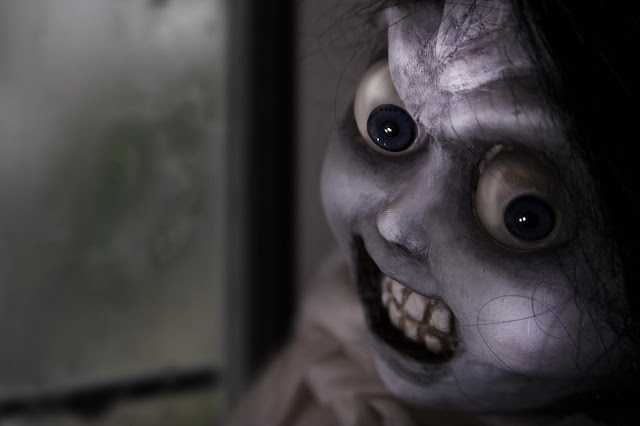 This covers a lot of ground throughout its 95 minute run time even if a lot of that ground isn't that original at times, or that well linked together. This seemed like it was going to be a haunted doll film to begin with. Kudos to the team for coming up with a creepy thing that actually looks creepy, even if it has a slight look of a Garbage Pail Kid to it. Unlike the dullard that is Annabelle this one actually moves at times too. It is a shame then that this creation isn't actually put to much use and the whole idea felt clumsily handled.

It isn't that long into the film when Chloe goes missing, I didn't particularly mind as the child did her best but didn't really endear me to her performance. Crevel was fine enough as Adeline but for me I never found her that compelling a lead either. She didn't have the feel of a mother in terrible peril and pain from having lost someone so close to her and so I couldn't help feeling a bit removed from her story. The same cannot be said for Ridout whose earnest role I adored, he had a quiet way of talking, but that was only half of what he did, the other half of his acting was all in his subtle facial movements which added a lot. Neil Hobbs may have only had a small part as Detective Nolan but his was another role that delighted. Curse of the Witch's Doll isn't a super charged high energy production, nor something at all frightening (with the exception of a few sinister shots of the doll and the witch). With the small budget and small cast this felt very closed off, and even mellow.

A big problem with the film for me was how it flowed. By this I mean the story didn't really progress in a smooth line, it felt a bit disjointed to me with the disparate parts not really gelling together well. Like just why Adeline believed the doll to be possessed wasn't really explained that well, and so I found her actions a bit random. Then after a flow of time things just start to escalate with no solid feel for why they suddenly are. The story was fine enough, but would have been better if I hadn't seen Shutter Island or Sucker Punch as both followed a similar path. The tone totally changes tracks for the last quarter but not in a smooth way, more a stuttering blend. I thought this change was for the better and led to a more emotional story than what had gone before but then another twist was added that felt a bit too far. This part was explored to the detriment of the main story which just seemed to get left behind.

Curse of the Witch's Doll was a peaceful experience with ideas that at times felt a little bigger than what could comfortably be achieved, and with elements that felt missing. With a small cast and a nice use of locations this never offended, but it didn't do enough to be called an essential watch. Curse of the Witch's Doll is due to be released on DVD on 21st January thanks to High Fliers Films.