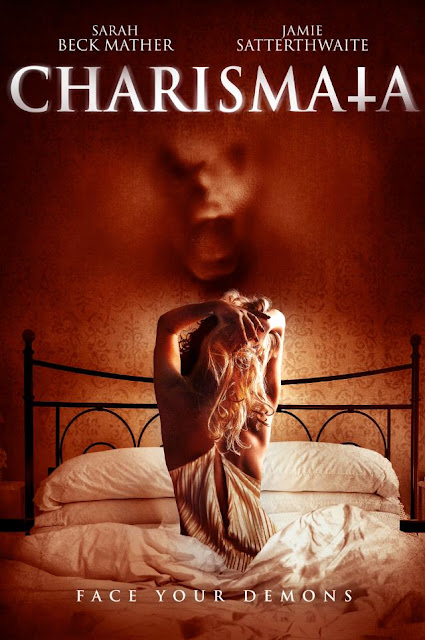 Charismata was written and directed by Andy Collier and Toor Mian. It is an English horror that starts off as one thing and by the end has transformed into something else entirely. For me this was a shame as I really liked what I initially thought it was going to be. It had some scenes of nice atmosphere, but this soon turns into something that felt just too outlandish and silly to take seriously.

London based Police Detective Rebecca (Sarah Beck Mather - Black Mirror, Dark Souls II) and her partner Eli (Andonis Anthony - Assassin's Creed Origins, Assassin's Creed Odyssey) are investigating a grisly series of ritualistic murders they believe to be the work of a serial killer. Despite an airtight alibi she starts to suspect that their first suspect - businessman Michael Sweet (Jamie Satterthwaite) is the culprit and starts to become obsessed with tracking him. Around the same time however she starts to get intense hallucinations that make her question her sanity. Is the pressure of her job getting to her, or is there some far more nefarious explanation? 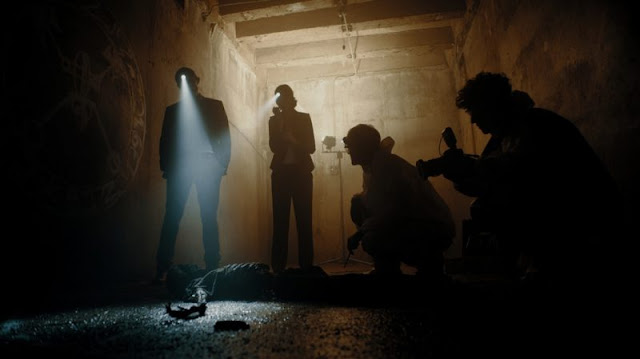 Charismata is a movie where everyone is miserable as hell, none more so than Rebecca. She has a face like a wet weekend throughout, not helped by her personal life where she is dealing with a messy breakup, and her professional life where her all male work colleagues, as well as the people she interviews act like the #metoo thing never happened (though they take the mick out of themselves just as much as they do her it has to be said). The cast are mostly males with her being the only female who gets more than a couple of lines of dialogue. The crime scenes were atmospheric, especially the first one which was bigged up by dialogue before hand. This felt very similar to Condemned: Criminal Origins to begin with, a similarity I loved as I really enjoy playing that video game. This was helped by some of the more bizarre moments such as various characters getting unexplainable nosebleeds.

Until around the halfway mark this was more a crime thriller than anything else. I liked the whole police investigation, the usual following the clues, speaking to witnesses and people of interest aspect, I figured this may be something like Seven. Then this goes far more surreal and weird which felt at odds with what had came before. There are dream sequences and hallucinations all of which I just didn't get on with. I could see how far away this was getting from the core plot, so much so that it fades away to be replaced completely with a more insular look at one woman's mental breakdown. 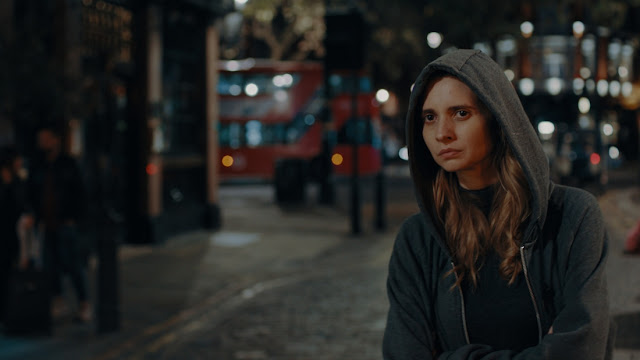 It was the plot itself that I found the least entertaining. Things are only ever half explained, you are left to piece together things yourself. To me though this just felt like a pile of plot holes and missing segments. It is hinted that Rebecca has some sort of issue with her father but this is never explained for instance. She has seemingly severe mental health problems that make her seem ill suited for her job even before anything weird starts happening. She is forever being told she is doing a great job but there is no evidence to support this. By the end it just felt like a jumbled mess with leaps of logic expected of the viewer. By the time the end credits rolled I had the feeling this was just a straight up miserable film (not only that, one with a stupid ending), there was no resolution or redemption for the troubled lead, she suffers and suffers throughout and then that's it. This is a shame as this is competently filmed, it has the feeling of being a higher budget than it is, and the effects used are interesting in how they are displayed. From Rebecca's face morphing as she gazes into a mirror, to the blood effects and more apparently supernatural stuff, it is all good. The cast also are mostly pretty good in their roles, especially the main trio of Mather, Anthony and Satterthwaite, while Johnny Vivash has a great role as the hapless head of a security firm.

When it comes down to it getting enjoyment out of a film is down to the viewer. My early hopes of seeing an entertaining police thriller were dashed. While there is no issue with changing genres for me the second half just was not as good, it felt more undefined with the storytelling not in place to really sell what is happening in a satisfying manner. The ending itself just summed up my problems with this, when unreality over takes reality in such a way it stops being gritty and moody, instead it just comes across as almost farcical. Charismata is due to be released thanks to High Fliers Films.