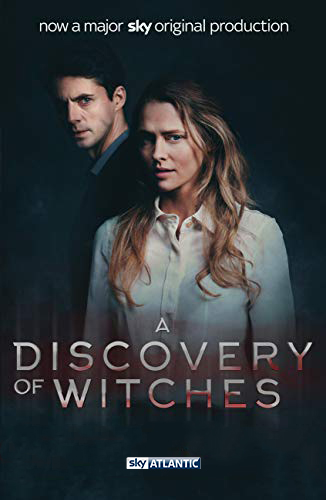 A Discovery of Witches is a British fantasy drama that made me think of a much more mature and normalised Buffy the Vampire Slayer. Based off a book it introduces us to a secret world that exists alongside the humans, one they know nothing about. Series 1 is made up of eight episodes, each around 45 minutes in length. A second and third series have already been approved.

The show takes place in a world where witches, demons and vampires co-exist secretly alongside humans. Diana Bishop (Teresa Palmer - Warm Bodies, Lights Out) is a witch who one day discovers a magical book thought lost to time. This gets the attention of everyone who all want it for their own ends. Matthew (Matthew Goode - Watchmen) is a vampire who becomes interested in her as a result and the two start a forbidden relationship that has the possibility of starting a war. 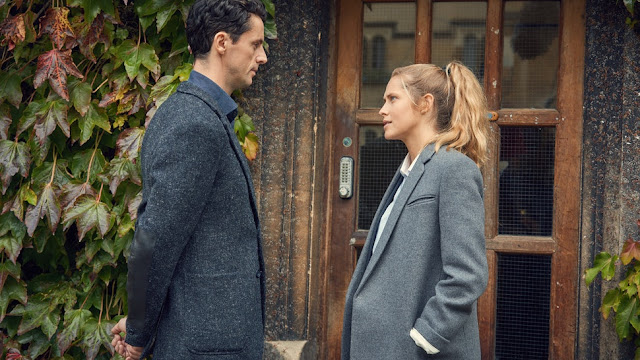 To begin with I wasn't that taken with A Discovery of Witches. While it features fantastical creatures this is very grounded in reality relatively. The three races alongside humans are witches, vampires and demons but all are less fantastical than the traditional versions. Witches in this world are a separate being to humans though the only difference seems to be that they are able to use magic. Other than that they look the same and do the same sort of jobs it seems. Vampires have more to them in that like tradition they are immortal and they drink blood, as well as have super speed and some mind control powers. However sunlight doesn't affect them at all and they have no fangs, just looking like slightly more pale humans. Demons are the third fantasy race but rather disappointingly the show does absolutely nothing with them. By the end of the series there had not even been a single throw away line about what makes them different to the average human, I found this kind of frustrating when the other two types are explored so well. On the subject of humans they really don't factor into the show much. The spoken blurb at the start of each episode says how the creatures have to live in secret from the humans but I get the impression if they outed themselves they would swiftly red faced realise that they are in the vast majority as aside from a small handful there seems to be no humans whatsoever existing in this world.

So while I wasn't taken, episode by episode my interest increased to see what would happen next. This is helped by a variety of cliff-hanger endings to episodes that make you want to watch the next. This is also done by showing you a preview of the next episode each time with usually the juiciest bits shown. With the short series length, by the time I was a few episodes in I felt I might as well stay for the ride. The horror aspect here is very slight, you get a few action sequences with witches fighting each other, or stylish vampire attacks but they are not the point of the show really. Probably a good thing as some of the special effects leave a lot to be desired, especially when characters float or fly. This show drops you into an established place and leaves you to play slight catch up to how it all operates. The three races have a council and so a lot of this is politics with various nefarious characters acting in their own interests. You have the head witch Peter Knox (Owen Teale - Game of Thrones) and his sinister lapdog Satu (Malin Buska), then on the vampire side you have the sadistic Gerbert (Trevor Eve) and his slave Juliette (Elarica Johnson - Harry Potter and the Half Blood Prince, Blade Runner 2049). This is kind of globe trotting with the main locations being Oxford, a chateau in France, and the streets of Venice. 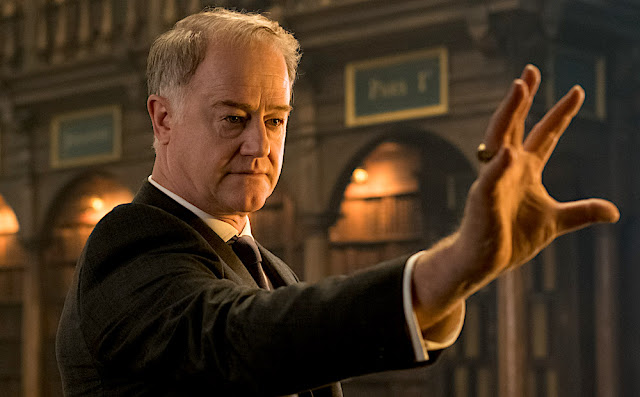 The main characters grew on me but I would never say I thought they were amazing. For Diana this is due to the consistent wardrobe of identically coloured blue clothes she wears, I don't know why but this endlessly irritated me. There is even a flashback of her when she's a child and she is still wearing the exact shade of blue! I liked the aspect of her discovering new powers as the story progresses. Matthew was a better character, but the dark brooding type is hardly original, reminding me of many different vampires such as Angel for instance. The main story outside of the dramatic one is their love story. Supporting characters are a lot better though, the demon Hamish (Gred McHugh - Gary Tank Commander) being my favourite of the bunch.

By the time the inevitable series finale cliff-hanger occurs a lot had been going on. I liked how some plot aspects all matched up, other ones I didn't appreciate as much, mainly due to not understanding how things work. Despite my complaints A Discovery of Witches was a really light and easy show to watch. I wouldn't say it is my favourite but when the next series rocks around I will certainly be watching it.

Posted by Daniel Simmonds at 13:12