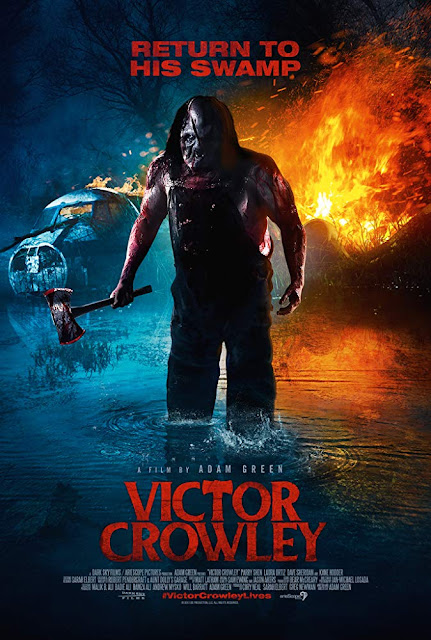 Victor Crowley is the fourth entry in Adam Green's Hatchet series of slashers. Before picking this up I can't say I had paid much attention to these at all, I didn't even know they were comedies. Reading the synopsis of the previous three films I was interested to learn that each one follows immediately on from the last which I thought was a neat idea. For this one though, while I assume it is chock full of fan service to those three this takes place ten years later and so I didn't feel too lost, especially after an intro narration that provides info on just who the notorious killer is. Victor Crowley has been nominated for Best Makeup in this years Fright Meter Awards.

So, it is ten years after the events of the original Hatchet films and sole survivor Andrew (Parry Shen - the Hatchet series) has just released an autobiography hoping to get rich off his story. His publicist convinces him to take part in a show that is being filmed in the place where the original killings occurred, so he boards a small plane to go there. Meanwhile wannabe filmmaker Chloe, her boyfriend, and her best friend Rose (Laura Ortiz - The Hills Have Eyes) have met up with guide Dillon (Dave Sheridan - The Devil's Rejects) in the swamp itself to make a trailer for a film based on the event. The plane Andrew is on ends up crashing into nearby, even worse the filmmakers accidentally resurrect the long dead Crowley (Kane Hodder - the Friday 13th and Hatchet series) and now all are in danger.

Despite not having seen the previous films I found myself really enjoying this for what it is. While this is a comedy it doesn't travel too far down that path, the jokes are plenty and are usually funny, yet they also don't overwhelm this with there being plenty of straight up horror moments. There are a wide variety of character types and it seems no one is really safe as some of the more colourful ones are killed off almost immediately, while ones that seem safe bets also get killed off pretty fast. Shen was great here as the cowardly survivor as he has plenty of redeemable qualities. Also surprising was Sheridan as Dillon. At first he came across as a complete self centred boaster, yet he too had plenty of redeemable qualities and really reminded me a lot of the legend Bruce Campbell in how over confident he was constantly. Hodder does what he does best, looking intimidating while killing people in gruesome ways, it is hard to find much fault with him here even if the character of Crowley doesn't do much different to Jason. I guess that is the point though, this is a soft mickey take of those types of slashers while being legitimate itself outside of the comedic moments. This is like a halfway house between a straight horror and the likes of Scary Movie.

Kills are always the most entertaining thing about these types of films and this doesn't disappoint on that front with a load of great looking practical effect kills, such as a head crush (that seems to be the new way to kill as it has popped up in everything lately), severed fingers, a decapitation (that you see from the POV of the victim including when the head rolls away. My personal favourite was a victim who gets their arm cut off, and then that same arm is shoved all the way through the victim's body so that it sticks out of their mouth! These effects sometimes look a little bit iffy, but the fact they are practical and not CGI is a great thing so I can't really complain. 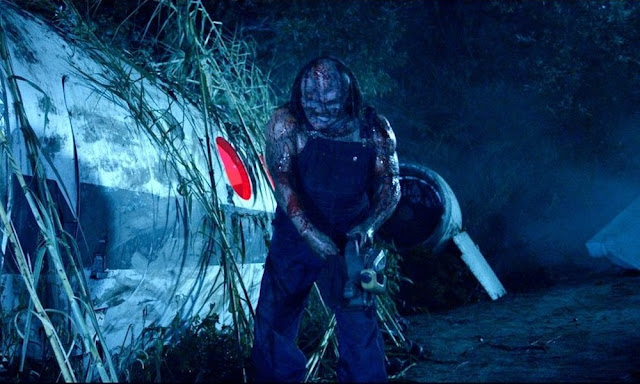 There was a slight feeling of Jeepers Creepers 2 in that the majority of the film takes place in the one location: that of the crashed plane. I had expected mostly swamp and so this was a change that I guess I was on board with. This does mean in terms of variety there isn't too much but there are plenty of moments around the plane and other places that this mostly limited place didn't get tiresome. The story obviously wasn't too complicated but I enjoyed it, going back to a franchise so long after the previous films often doesn't work (Scre4m, Blair Witch), but I enjoyed this one, though I can't comment how it compares in comparison.

Victor Crowley succeeds for me because even being a fourth film in a series I didn't feel like an outsider, it brings you up to speed pretty quickly on what has gone on before, while returning characters, and nods to the originals made me feel that fans would have got a lot out of this. The comedy sometimes doesn't work (such as the pointless prologue) but more often than not it got a chuckle out of me, add to that some likable characters, plenty of fun violence, and a run time that didn't outstay its welcome and you have a nice bit of throwaway escapism.

Posted by Daniel Simmonds at 10:29