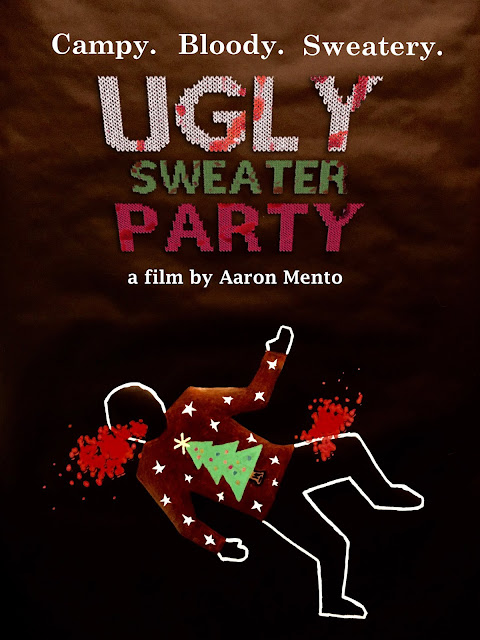 Ugly Sweater Party is a comedy horror that has an over reliance on sex jokes. Due to the bloody and demented storyline this for once wasn't too much of an issue, but this was something that seemed to lose focus the longer it went on.

It's Christmas eve and harmless losers Jody (Hunter Johnson) and his best friend Cliff (Charles Chudabala) are on their way to what they assume is going to be a wild party out in the woods. Realising that it is actually an 'ugly sweater party' and that neither of the two have sweaters with them, as well as the pair being in the middle of nowhere Cliff begins to worry, that is until they notice a passing homeless man who just so happens to be carrying with him a hideous jumper. They acquire the jumper but little do they realise that it is an evil sweater, containing within it the dark soul of a sick serial killer (Sean Whalen - The People Under the Stairs). Now the jumper has possessed Cliff and once at the party (that turns out to be instead a religious camp) he finds himself powerless to stop the urge to kill... 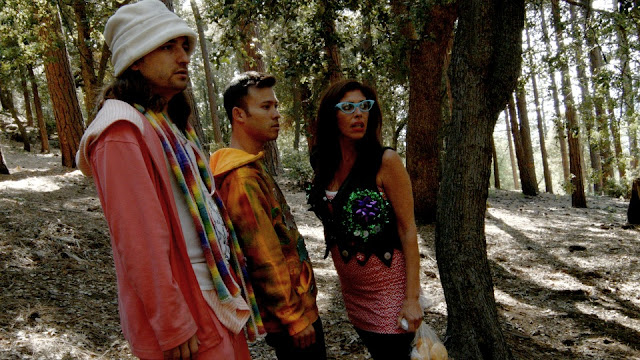 This started off very well and I felt for sure I was in for a real treat. There is a fantastic prologue set ten years previously that shows a brutal detective murdering the killer: Declan, and this is intercut with close up images of an ugly sweater being created, all with great music and bright credits popping up. After this great opener though it became apparent that the humour is very low-brow. Around 90% of all jokes in this movie are either sexual innuendos, or jokes about sex and human anatomy. The other 10% are made up of jokes about bodily functions and humour that I actually thought was pretty great. While the humour wasn't for me in the main part this is surprisingly stylish at times with some good ideas. At times this reminded me of the rampant stupidity of the classic Acid Head: The Buzzard Nuts County Slaughter, this due to the array of surreal characters. This also felt similar to Camp Death III in 2D! in that both happen to be based at woodland camps, and both have over the top characters, here though the characters while insane have less of a comic book feel to them.

I suspected this would be like a comedy slasher, with the possessed Cliff dispatching people in a variety of inventive and humorous ways. This certainly seemed to be the way it was going with a really fun kill involving practical effects to start things off (outside of the prologue that had a similar cool looking kill). It was odd then that after this the kills changed into CGI. There is a fun subplot involving a disgruntled groundskeeper that was banned from attending the party due to listening to heavy metal. His appearance into the main storyline brought a shift into the speed of events with everything suddenly getting ramped up ten fold. I did enjoy this whole section and was unexpected but the CGI while passable enough couldn't compare to the much more interesting practical effects. This also fed into the story itself, while it didn't become to feel disjointed it did feel like the second half sped up so much that it began to feel rushed, and with this quickening also came the feeling that the two halves didn't really feel that well joined together. It was a spasmic mass of different characters doing different things with quick cuts. 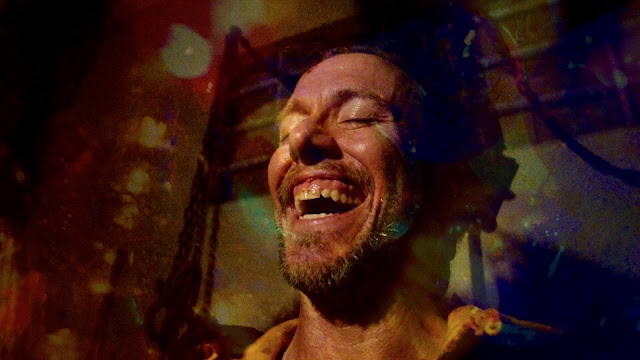 Much of the cast are near enough voiceless, or have only a few lines but I found myself liking the protagonists, Johnson as the chilled Jody brought to mind Dude Where's My Car?, his stupidity didn't stop him being likable. The psychic goth girl Hanna (Lara Jean) was adequate even if her character was just a tool to explain parts of the plot to Jody. Whalen looked the part as the serial killer, his character doesn't do much more than stand around laughing, but he did look suitably twisted. With the story, while it was simple enough an evil jumper made it memorable, the jumper design was great with a glowing pentagram on it, and the effects used for it, such as it fusing to Cliff's body worked well. I also loved the time travel type concept that the jumper was able to throw everyone forward in time to make them forget events that had happened, meaning a big reveal of the killer is able to occur several times.

I really liked the style of Ugly Sweater Party, it was gross and demented enough and had some fun characters in it. For me though the humour just didn't appeal for the most part, also I really did feel it lost its way a bit in the second half. Still an evil jumper able to possess people isn't something you see every day, and this is stylish, silly and entertaining. Ugly Sweater Party is now available exclusively on Amazon Instant Video.