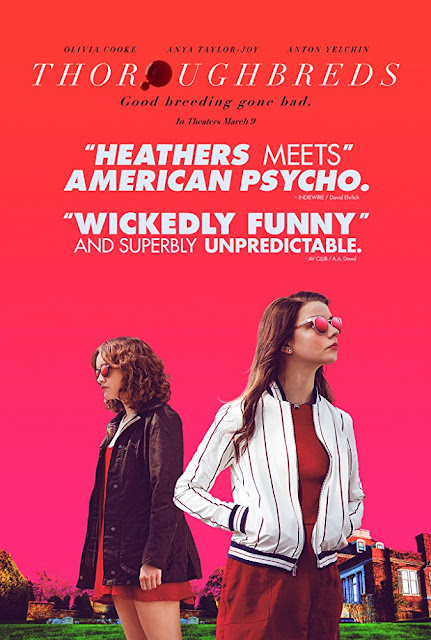 I will start off this review by saying that Thoroughbreds isn't really what I would class a horror film, even calling it a thriller is a bit of a stretch. It fits in with the genre of unhappy people who don't really know what they want out of life, something along the lines of Garden State and Ghost World but on a darker path, I guess more in line with the classic Heathers. The reason for me watching this particular film was once again thanks to the Fright Meter Awards as Anton Yelchin (Green Room) has been nominated for Best Actor In A Supporting Role in what was his last role before his sad and untimely death.

Lily (Anya Taylor-Joy - Morgan, Split) has been hired to do some extra tutoring to a girl she used to be friends with: Amanda (Olivia Cooke - Ouija, The Limehouse Golem). They soon rekindle their friendship with Lily interested to discover her friend has been unable to feel any emotion at all for her whole life. Lily's mum has re-married to Mark (Paul Sparks - House of Cards), a man that the girl cannot stand, and so hoping to use her friends unique perspective on life she sets out to get him removed... 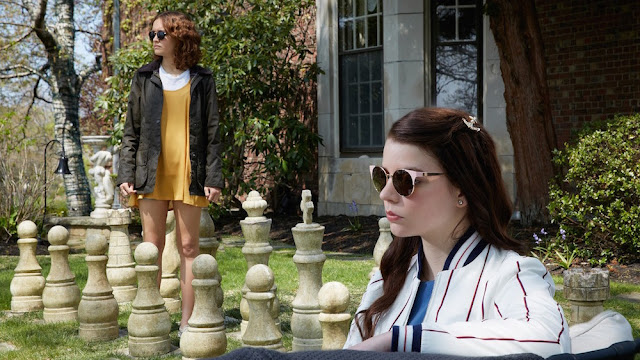 As I was watching Thoroughbreds I knew it would be a movie I would have trouble writing a review for. This is a lot of talking between the two central characters with not much really happening outside of that. This isn't surprising when you take into account this originally had been planned as a stage play. The two leads are both well suited to their roles, both are good actresses though it was Cooke who impressed me the most. Maybe I just found her character to be a better one. Though she is incapable of emotion she comes across as better than Lily who can feel emotions but chooses to be ruled by them. The other characters here don't really figure in too much. Yelchin had a nice small role, one that was pivotal to the middle third, he was really the only other one who had much to him. Mark was set up to be seen as the adversary, while Lily's mother had barely anything to her at all.

There are some good scenes of tension here, I always appreciated how sound and visuals would tell a story that was happening away from the camera. Around the mid point there is a tense scene that plays out via a motion sensor coming on and off. The finale plays out in a different room than where the camera is pointed at, muffled noise the only indicator of what may be happening. I had a bad feeling watching aspects of this, I'm a very empathetic person so I found myself wanting no harm to come to anyone. I liked the characters enough that I hoped for peace, though Thoroughbreds gets darker and darker all the way to the final scene. The script was well written and forever entertaining even if it can occasionally feel a tiny bit pretentious, such as when the two talk about how everyone in an old film they are watching are probably now dead, or very elderly. 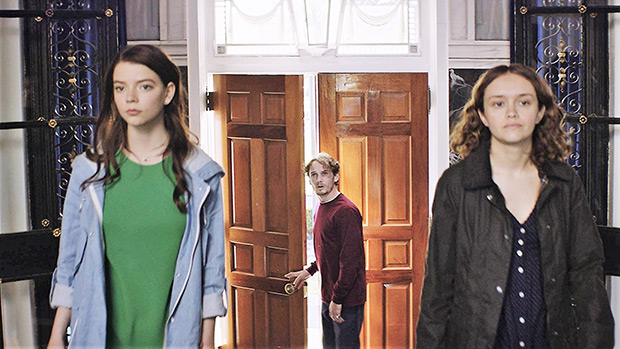 And I think that is where I will end this review, short as it was. Out of all the films I needed to watch in order to cast my final votes for the Fright Meter Awards this was the one I was most unsure about. I needn't have worried though, this was an intelligent, darkly humorous, and coldly thrilling tale that while low on much action, in a rare move nowadays I actually watched in one sitting rather than splitting it into sections, much like this film itself which is separated into four chapters.