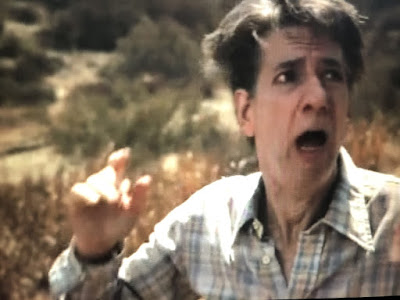 The Son is a short horror film directed by Adrian Vallarino that clocks in at around eight minutes. For much of the run time I really wasn't sure what to expect but this pulls it back together for the finish. The whole film feels like it stepped out of time with the rural setting giving the feeling of something from the sixties or seventies.

Russ Kingston (Low, He's A Bleeder) stars as the father; a farmer whose son has headed out to hunt rabbits. He tells the boy to make sure he is back by midday, but when he doesn't return the father begins to panic...

I really wasn't sure of this for much of the run time, and that is due to the way the character of the father behaves. There was a weird exaggerated style to his performance that made him look and feel like something out of a comic book or cartoon. From his facial expressions as he is working, to his frantic running around when his son hasn't returned there was something just odd about his character. Flashback sequences allude to why he is like this but I didn't feel they totally explained it all away. Of the story itself I was pleased with how it turned out, there was a nice ending shot that really cemented The Son, saved it in fact.

While I did have issues with The Son in places I did like where it eventually ended up, for that alone I would say it is worth a watch, that and the old timey feel that it creates through grainy footage and old fashioned music worked well to make it feel all a bit timeless.