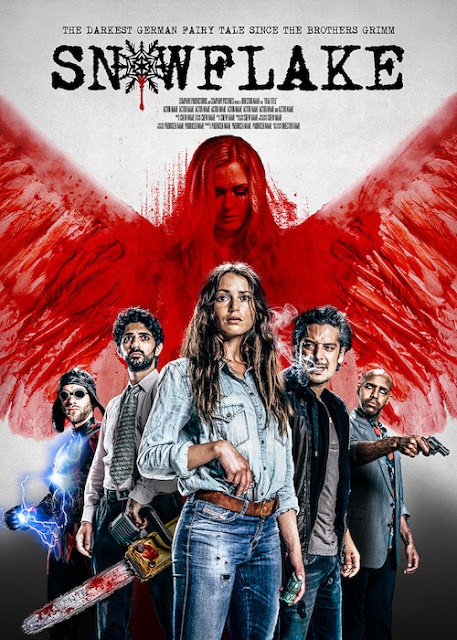 On the odd occasion a film comes along that just straight up blows me away, that is the case with the stunning German Adolfo J. Kolmerer and William James directed film Snowflake. Now to be truthful this isn't a horror, this has elements of comedy, action, crime, and even a little bit of a post apocalyptic feel, however I was fascinated about the idea of this and so just had to watch it.

Snowflake takes place in a Berlin of the not too distant future, due to complete societal and economic collapse the country has became a place of near total lawlessness with anarchy ruling the streets, due to very limited emergency services. Javid (Reza Brojerdi) and Tan (Erkan Acar) are two rogues on a life long mission to find the man responsible for the death of their families as children. They stumble across a haunting discovery when they find a script for a film that perfectly mirrors their actions in both the past, present and probable future, and so they set out to find the author of this prophetic writing. Meanwhile in a seemingly unrelated story Eliana (Xenia Assenza) seeking revenge for the murder of her parents teams up with her parents ex-bodyguard - Carson (David Masterson) to go on a mission to hire some hitmen to kill the two men responsible.

I feel whatever I write in this review just cannot do justice to the majesty of this amazing movie. This seems stuffed to the brim with symbolism to do with religion, fairy tales and other topics, whilst also given a commentary on society as well as inner peace. I feel I am not clever enough to really understand it all but it was fascinating to watch. This was also really meta in how it was constructed. The author of the film script titled Snowflake is a man called Arend (Alexander Schubert), the writer of Snowflake itself is Arend Remmers and so there were plenty of clever moments. For instance scenes are interrupted by Arend commentating on how cheesy they are, scenes play out in their entirety to then be revealed to just be characters having read ahead to see what was going on, and as characters play out their scenes occasionally text will appear on screen to mirror what is going on. It also plays with the audience by revealing the entire plot of the movie early on that provides an apparent clear path for the plot, but then puts hurdles in the way that change expectation, some of which are really quite funny ("Logic trap" being perhaps my favourite example of this).

The two friends first discovery of this element of their future already being written was fascinating, and also actually quite creepy while keeping being funny. The two reading in real time the script means they keep getting irritated that the lines are just saying what they are doing in that particular moment, reading ahead gives them clues that usually hinder them more than help, while script changes written by the author lead to unexpected moments. It was the characters of Javid and Tan who I most enjoyed following, there is a real feel of a Quentin Tarantino movie in that these two are funny and likable, yet at the same time are indiscriminate killers who can easily be seen as antagonists rather than heroes. Yet they are giving depth to them that make you like them, their tragic backstory, as well as the very strong and unbreakable bond of friendship they share make them special. The influence of Tarantino can also be felt in how scenes are structured with title cards, as well as them being arranged out of order at times. Best actor would be Schubert, I adored his role as the writer, someone who could almost be seen as a God character which is funny as there is already another character who literally believes himself to be God.

The other half of the film is mostly in English with the adventures Eliana and Carson get into while hiring killers. A weird 'Three Little Pigs' type vibe with them visiting increasingly elaborate places in their mission to get the people they want. Starting at a junkyard with a pair of animal mask wearing cannibals their travels get them meeting an apparent android, a real life superhero - 'Hyper Electro Man' (Mathis Landwehr), as well as the secret underground HQ of a rebel army. The two sides to Snowflake flow together very well without really merging until much later in the movie.

The plot is surreal but not in a way that feels contrived, the overall story is cleverly written, but individual moments also felt fresh and original. Two characters hung upside down swinging in the background as in the foreground a man in a pig mask plays cards with a man in a chicken mask is one memorable example. The directing was forever fantastic, the cinematography always on point, and the soundtrack was sublime, it just fitted the oddball tone so well.

At two hours long this still didn't feel over bloated, with enough variation to stop things getting stale. This review has only skimmed the surface of what made Snowflake so good, I mean I didn't even mention the titular character herself (played by Judith Hoersch) who is in some of the very best scenes, or the true antagonist who gets edited in between scenes in an interesting way. This really is a film I would recommend seeing, even if it isn't horror. Snowflake will be available from December 4th on Blu-ray, DVD, and Digital HD in the U.S thanks to Artsploitation Films.