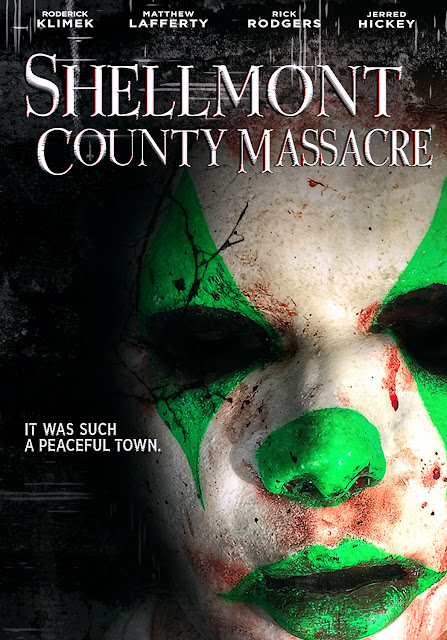 Having spent the last few weeks firmly concentrating on the Fright Meter Awards nominations it felt nice to step back into the shallower waters of the indie horror films I get sent for review. My expectations for Gus Trapani's Shellmont County Massacre were very low, initial impressions didn't do much to quell my concerns. However this actually really isn't that bad a film at all, this is something with twists a plenty and some likeable characters.

Billy (Roderick Klimek) is the local sheriff for the tiny rural Shellmont County, his partner is Donny who is seen as a younger brother by the man. One day they hear of a barbaric murder of a woman and her child. Before long more senseless murders occur with it discovered there is a sick killer on the loose, a clown mask wearing maniac who seems to kill just for the thrill of it. 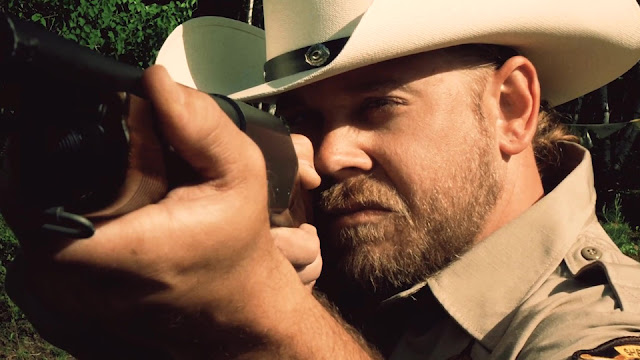 The plot here is pretty bare bones and I would say that aspects of this are where the movie falls down a bit, especially with character development. Where this does excel though is the characters who get time devoted to them. I found the main characters of Billy and Donny to be great choices. Both are likable people who feel a burning duty to protect the people under their care, yet both are also conflicted in how they should respond to this killer. The film does a great job of showing this inner turmoil, especially with Billy. Klimek is great in this role and was a protagonist I really could get behind. The core characters are slim but all fit their roles well, even ones who don't get as much screen time have enough to them to make them interesting. There were two who felt both under developed and unrealistic though.

A big aspect of the film is doing the right thing no matter what you actually want to do, how you shouldn't reduce yourself to being just as bad as the criminals. The voice of reason is Billy's father. Once the sheriff himself this man quit his job to take up a new vocation as a priest. This character felt really quite underdeveloped, his back story of why he quit is never explained, characters don't pay any attention to what he advises them, and he makes some weird decisions. I don't quite know what they were going for with this character, he just came across as a little bit of a distraction. The killer was a cut price Joker who spends the entirety of the film giggling and screaming in equal measure. I liked that this person was obviously insane, yet where the actual Joker character works being so mysterious here it goes against the plot a little. The killer is a babbling maniac and so I found it hard to believe how he could escape justice for so long when he was incapable of remotely passing himself off as someone sane. 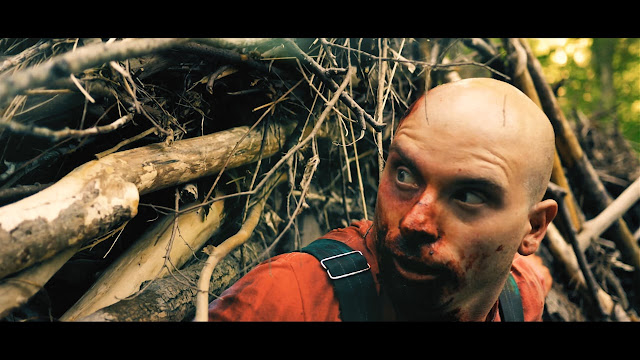 For something that comes across as nice to begin with there is a dark path of death and destruction that occurs here. It is safe to say that by the time the credits roll absolutely no one is happy, all the characters have travelled down harrowing trails. There are some surprising deaths here with no character safe. This is bleakness hidden by bright sunshine and genteel persona's. The body count was higher than expected and also the attention to detail in the death scenes. The violence here almost brings Shellmont County Massacre down to grindhouse levels of bloodshed and mayhem. This violence seems at odds with the tone of the rest of the movie, yet it works as it pointedly shows the unbalancing the killer has brought to the relatively peaceful county. A family chopped up with a chainsaw, a child murdered behind closed doors, an eye ripped out of its socket, this film does not shy away when it comes to the special effects and blood. The effects may not be amazing but they do the job well and I can never complain about practical effects over CGI.

This is directed well with some clever sequences that bring to mind films with much bigger budgets. A few times scenes play out in silence, the visuals telling a story without need for dialogue or even music. Elsewhere there is a strong interrogation scene that plays out in darkness, bringing the central characters right into focus. There are tense moments, standoffs, chases and shootouts which are all competent and exciting to watch. The pacing was a little bit muddled I felt, and there seemed to be no real moral to the film either but it was all decent enough.

Going in to Shellmont County Massacre with no expectations meant I actually thought this wasn't bad. It was well made with some decent performances and was only really let down by some minor plot holes, and a dollop of suspension of disbelief that is required to properly get into this. A bleak descent into trauma and loss, yet without ever becoming as depressing as it had every right to be. Shellmont County Massacre has recently been released by Midnight Releasing.