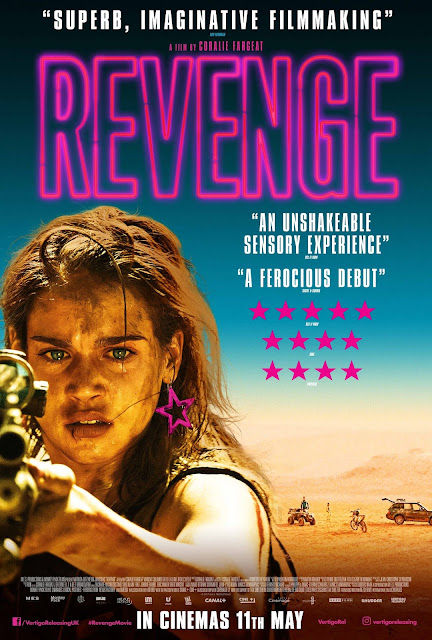 The real joy of being a member of an annual horror film awards committee is that you get to see films that otherwise you would pass by. Matilda Lutz's performance in the fittingly titled French thriller Revenge got her a nomination for Best Actress In A Leading Role in the Fright Meter Awards 2018. Having now seen that film I can really see why, she and the film both were stunning.

Jen (Lutz - Rings) is the mistress of rich businessman Richard (Kevin Janssens) who has taken her to a remote villa out in a desert canyon from which him and his two friends: Stan (Vincent Colombe) and Dimitri (Guillaume Bouchede) do their annual hunting trip. He had planned to have a few days of fun with her before his friends arrive, but they turn up early and straight away it becomes apparent they desire the flirtatious Jen. The next day the desire gets the better of one of the men and something terrible occurs. Realising Jen isn't going to stay quiet about what has happened, and with her threatening to expose her secret relationship with Richard to his wife the men leave her for dead in the middle of the desert. However going back to recover her corpse the next day they discover she has vanished, for she is very much alive and out for revenge...

The cinematography of this movie is stunning, the rich, clear colours, the perfectly framed shots are a work of art, as is the Carpenter inspired soundtrack that is constant throughout. Some scenes were almost art, the part where ants crawl over a prone body for example was pure perfection. The female revenge genre isn't one I ever really feel comfortable with, yet over the years there have been some great examples such as Bound to Vengeance. The violence against women part is the section I really don't really enjoy watching in these movies, I'm all up for the revenge bit, just the prelude to that can be pretty nasty. Lutz is stunning here, the carefree, flirty and cheeky girl she plays at the films start may as well be a different character to the cold merciless killer she transforms into. After the first half hour her character doesn't even speak anymore, this felt realistic both due to her character being on her own, but also due to the terrific trauma she has gone through. On that front though this is very much a film rather than anything approaching realism. However driven she may be she spends half the movie with a large branch impaled through her stomach, whilst out in the hot desert with no food or water. I can look past things like this when the film is so well made. Having a female director (Coralie Fargeat who also wrote the screenplay) creates a real feeling of empowerment in that the men are shown to be weak and not as powerful as they would at first appear, while Jen escapes the stereotypes of her gender to be born anew.

The other actors here all do fantastic jobs even if their characters didn't really develop much from their first appearances. I enjoyed the interactions these three villains have amongst themselves, their bickering usually came across as blackly humorous. These are scumbags, Dimitri is a lazy slob, Richard has wicked anger issues, whilst Vincent is a coward. This made it very fun to see Jen enact her revenge on the trio though, these are people you want to see punished and boy does the film not shy away from this part. There is so much blood in this film, it leaks out of every character on multiple occasions, the finale leaves a spotless location absolutely covered in crimson gore, so much so that characters are literally slipping over in it. In at least three scenes people are being tracked by the constant line of blood that is dripping out their bodies. With this violence comes special effects and they are mostly pretty decent, aside from a weird looking head exploding scene we get flesh wounds that made me wince, especially one person pulling large shards of glass out of their foot. The blood is always on point and looks very blood like leading to some great 'battle damage' images of the cast. 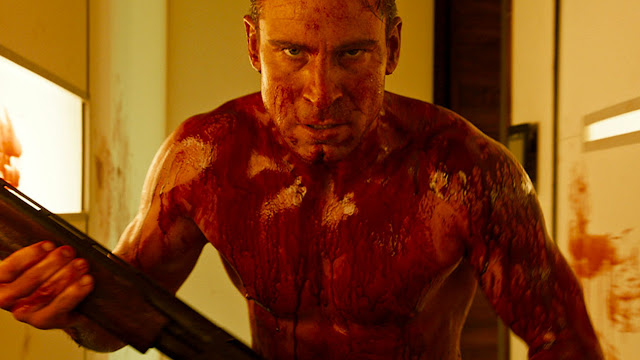 I guess one area where this does fall down a bit is the actual story, it is predictable and events occur as you would expect them to. For me I enjoyed this aspect, it had the feeling of a video game with Jen fighting increasingly tough 'bosses'. Each showdown is very different from the last, whether it involves close combat, running battles, or a very suspenseful and thrilling game of cat and mouse. This variation was key for me as Revenge stayed dramatic and pulse pounding for much of its run time. Throw in some drug induced hallucinations and nightmares and you have a movie that even takes a step into the psychedelic which is helped by the images of death and rebirth, such as Jen's Christ like pose when she is first left for dead, then later the image of a phoenix that gets burned onto her stomach. On multiple occasions the camera slowly pans up and down Jen's body, showing how much her character has transformed each time. There are some leaps of believability for flows sake, the most glaring one being how our lead manages to catch up to a very distant car when she's on foot.

I often find the films I most enjoy are ones that have a really strong bond between soundtrack and cinematography. This please both with the stunning location, as well as the tight directing and framing of shots that coupled with the pulsing Carpenter-esque music becomes something really quite beautiful. The story may be a bit generic but every other aspect of Revenge is a tightly woven blanket of thrills. Revenge is currently available to watch on Shudder.