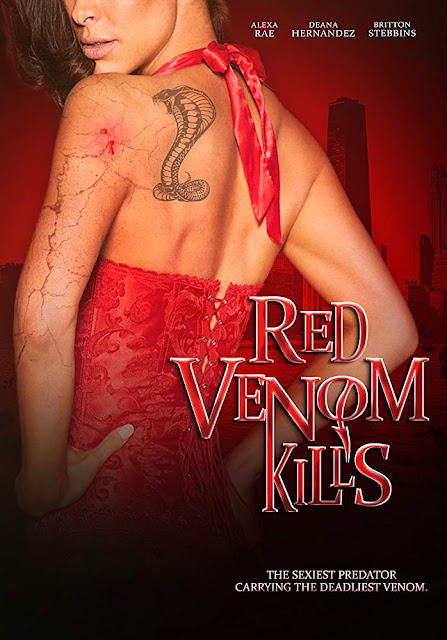 Red Venom Kills is a movie that has been made as a loving homage to the exploitation and grindhouse flicks of the 70's. It features a host of scantily clad females, cheesy dialogue and bad acting, yet all with a purpose to them, to echo the inspirations this draws from. While it is stylish and fun to look at I also hate to say I found large chunks of this plain boring.

Alexa Rae stars as a former hooker who was left for dead after being ambushed by the henchmen of the evil Dark Widow (Deana Hernandez) after going onto her turf. With her last moments she discovers an elixir her mother had left for her that gives her super strength and stamina, and also a deadly Amazonian poison. With these tools she becomes reborn as the super heroine Red Venom, and six months later returns to the streets of Silk City to take her revenge... 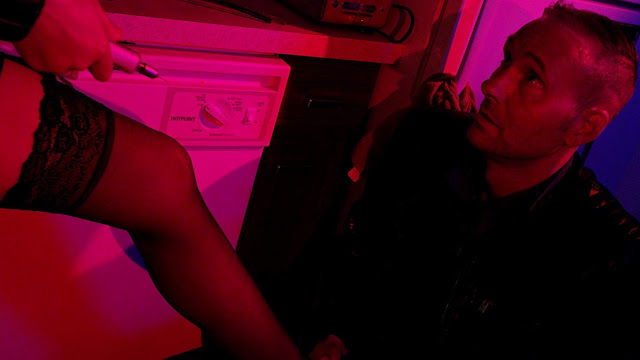 This tried very hard to be authentic and I loved that it did. The film pops and crackles all the way through, occasionally the film footage burns out, and there are even missing scenes with placeholder text explaining this. The movie opens up with some trailers for the directors previous grindhouse style films, and there is even an seventies style intermission sign halfway through. Add to this scenes that play out in bright primary colours such as blue and red and you have a film that looks different to the modern day style of filmmaking.

I found a lot of this to be really quite dull, there are many, many scenes of people walking around while appropriate tunes plays over the visuals, like a music video. It all looks good but it led to moments when my mind would just wander away and I would be snapped back to present trying to play catch-up. Being a homage to past films the plot is really simple and plain. There are no twists or turns of any note and I found it hard to care about any of the sleazy characters here. The antagonists are all similar looking men, while on Red Venom's side you have the cop Thomas (Britton Stebbins who also wrote and directed this) who is just a bit weird. I figure this was purposeful though to bring attention to the two main females here. The special effects are non existent, to my knowledge the only one occurs right near the end when some CGI blood spurts onto the screen. 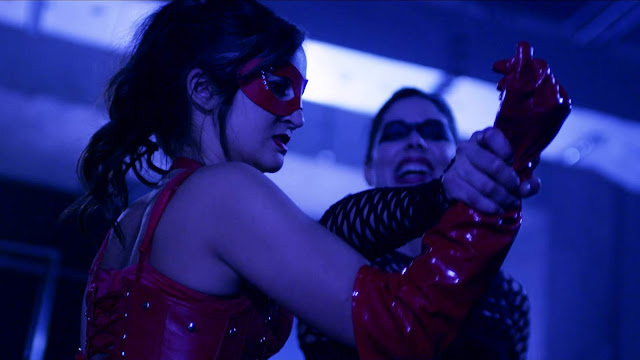 This combines both female empowerment and sexism into one package. On the one hand both Red Venom and Dark Widow are shown to be much better than all the men they meet. Venom wins every fight she gets into with males, as well as constantly humiliating them (such as kicking them in the genitals), meanwhile Widow's supreme confidence seems well earned with all men bowing down to her. The sexism part comes from the costumes they wear, both being really quite scantily clad, something the camera doesn't shy away from ogling at, whether it is close up shots of the breasts, or a lingering view of the backside. If this had been made with today's sensibilities in mind then sure this would have been hard to except. However as this is so very blatantly a love letter to exploitation films of old this is excusable, it would come across as more odd if it hadn't followed this outdated path.

Red Venom Kills is certainly going to appeal to some people, I imagine with alcohol it would be far easier to look past the paper thin plot and just enjoy the visuals. The commitment to making this look like an old film is something to praise, I just wish there had been more meat on the bones as I felt a lot of this just felt a little bit bland. Red Venom Kills is now out to buy thanks to the great people at Midnight Releasing.