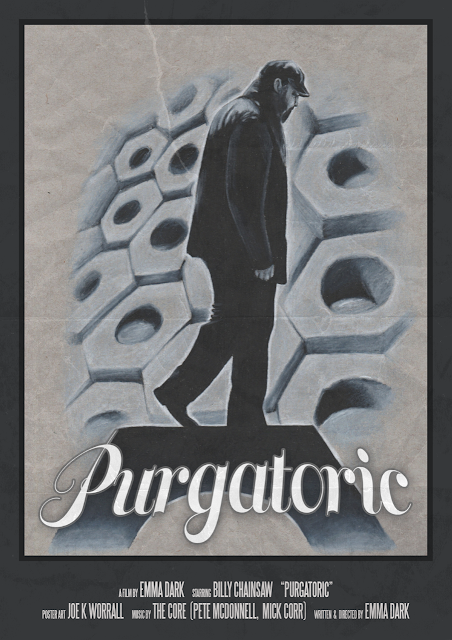 Purgatoric is an experimental art film from award-winning filmmaker Emma Dark (Seize the Night). This clocks in at around four minutes and was made with a minimal crew that was made up of just Dark, she was responsible for the screenplay, editing, camera, and directing. I admit I don't get this at all, but the great score by The Core meant I enjoyed my time with it.

A man (Billy Chainsaw - Strippers vs Werewolves, Cry Wolf) is alone on a beach, it might be post apocalyptic, it might be current day, it might even all be metaphysical. He appears a bit lost and anguished but soon comes to a realisation.

So I didn't understand this, though am sure the title is a clue, at least as to the state of mind of the character, but I did really love the music. I also liked how this had been made to give a retro feeling to the look. It was shot digitally and then during post production altered to make it look like it was filmed on a Super 8. The title and end cards were also really well done, I loved the trippy morphing they did. it just fitted well with the vibe of this. Check it out for yourself below.