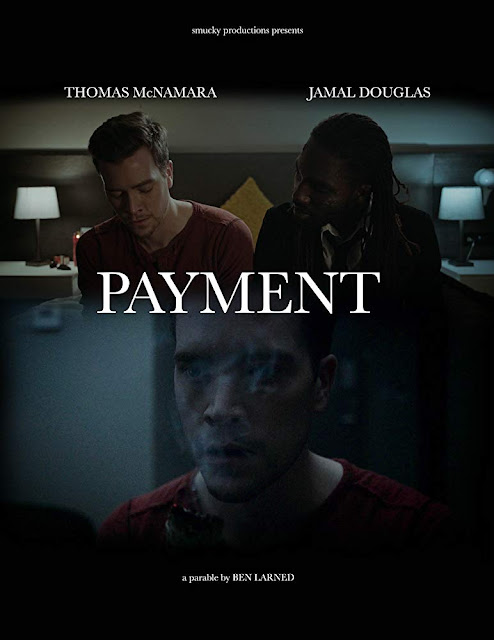 Payment is a short horror that is written and directed by director Ben Larned. This nearly eight minute film deals with the classic 'sell your soul to the devil' plot device, yet this time around there is a LGBT twist to the events.

For 10 years Stephen (Thomas McNamara) has been in hiding due to a demon (Jamal Douglas) that is hunting him down to collect his soul due to a bargain they once made. With a plan in mind Stephen takes the step of summoning this being, however he is shocked to discover that the demon has a secret of his own to share...

I liked how tender and intimate this short was, the majority of it is a softly spoken conversation between the two very different characters. There is no shouting, or scenes of action and high violence, instead we get two very different people sharing their thoughts and feelings. I enjoyed this, mainly due to the fresh perspective given to the demon who explains the turmoil and hardship his job entails, someone who has feelings and is as much trapped in the life choices he has made as Stephen is.

The lighting is kept to a minimum with only a few moments of soft, almost peaceful music playing. The focus is very much on the two characters rather than the bland empty motel room they are sat in. If I had any complaints it would be that sometimes they are so soft spoken that I had to strain my ears to make out what they were saying. All in all though this gave a fresh spin on an old story, one that is bittersweet, but also one that is peaceful.