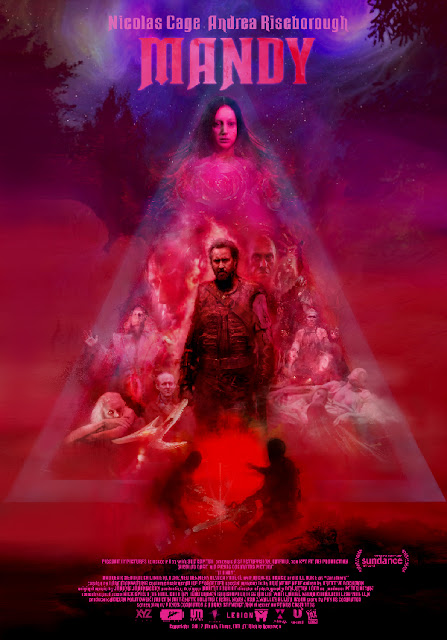 I had heard that Mandy was Nicholas Cage's own John Wick. I don't mean that the style of film is similar (though thematically they are), more that this was a film that made the lead actor relevant again, and showed just how great they can actually be. This is a psychedelic nightmare journey into the heart of Hell but for me this great idea just didn't grate well against my film watching skin. Mandy has been nominated for many different categories in this years Fright Meter Awards, I admit the committee has a habit of adoring the more arty films, I seem to remember the god awful Mother! also getting lots of nominations in the past. Nicholas Cage is up for Best Actor In A Leading Role, Linus Roache is up for Best Actor In A Supporting Role, Panos Cosmatos is up for Best Director. The film is also up for Best Horror, Best Makeup, Best Score, Best Editing, Best Editing, Best Cinematography, Best Special Effects and Best Costume Design, phew!

Nicholas Cage (Face/Off, The Rock) stars as Red Miller: a simple man living an idyllic life with his wife Mandy (Andrea Riseborough - Oblivion, Black Mirror) in a deep forest. One day the leader of a cult - Jeremiah Sand (Linus Roache - Batman Begins, The Chronicles of Riddick) happens to see Mandy and takes an instant shine. His cult team up with a demonic biker gang to kidnap her and her husband, events happen and Red is left with burning vengeance on his mind. With weapons in hand he sets out to get revenge... 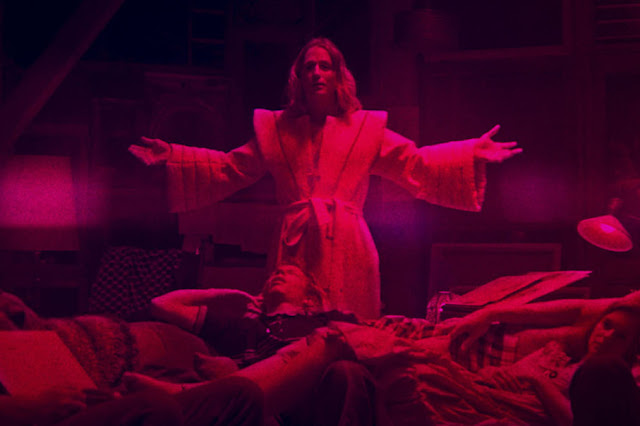 This is an extremely trippy film which is usually something I love. There are crazy visual effects, motion blur and unnatural colours, distorted voices and slow down. Yet this impeded my enjoyment. Mandy is two hours long, but the first hour is drawn out extremely slowly with events moving at a glacial pace. The whole home invasion part of the film plays out almost like one long dream sequence. A character lays on her bed literally dreaming, then it turns out that what is happening is actually real. Even for me I sometimes was feeling this was a little too slow, yet the feeling of a dream is realised so well, from the washed out colours, to the bright primary colours, the effects and the editing can sometimes be beautiful. There is one scene here that nearly blew me away with just how stunning it looked. The camera is focussed on Sand's face as he speaks, his voice rife with distortion. As he talks his face impeccably morphs into Mandy's face. It does this again and again, back and forth, ever so slowly over the course of several minutes, it was stunning how the switch couldn't be seen. One moment it is his face, the next hers with no understanding of just when it switched, really was a phenomenal effect.

As if to make up for the slow beginning the second half is a whirlwind of violence with Red battling each of the many people who have wronged him. His journey is stuttery with the dreamlike feel maintained in that he just seems to float from location to location with no real sense of him travelling. This also applies to the more mystical aspects of Mandy. There is a lot of drug use in the film, LSD being the main one. This not only plays into many scenes (Mandy being drugged with Acid when she is kidnapped, the demonic bikers being crazy due to a bad batch of the stuff they took in the past) but it also shapes the course of the story. After taking some bad LSD he finds, Red has a vision of where he has to go next (a great scene that sees his head turn into plasticine and melt!). Then he meets a chemist who again seems to know exactly what Red wants without him even stating his intention and points him in the right direction.

There are a variety of action scenes that occur, each is brutal and short range with Red coming across as a John Wick who didn't have any skills. His fighting is sloppy with luck repeatedly coming into play. These fights are all varied and never failed to be intense to watch, the best being a fantastic chainsaw vs chainsaw battle! The dreamscape feeling just continues relentlessly, short cartoon sequences occur in between scenes every now and again, some of the adversaries he faces literally look and sound like monsters, it feels like he is on a level of Hell and just hasn't realised it. Cage has been praised for his acting in this, and visually he does the part great. My issue isn't with him, more the sparse script that coupled with a whole bunch of characters who are really hard to understand meant there wasn't much satisfaction to be found there. The great score by Johann Johannsson fits the visuals perfectly helping imbue this with the faraway dreamy look at least.

Mandy is a stunningly made film, I am not disputing that. Watching this sober though I had the feeling of isolation from what was happening, I'm sure if I had been in the same head space as this it would have been a magical trippy kaleidoscope, as it was though it rubbed against me a little and I was left appreciative, but also a little lost.