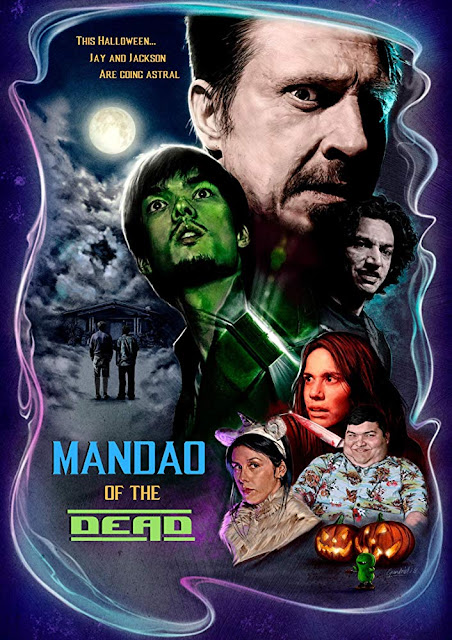 By this point in my life I am conditioned to expect a zombie film whenever I see a '...of the Dead' in the title of any film. Due to this I was slightly disappointed Scott Dunn's horror comedy Mandao of the Dead didn't have any rotting fiends. This indie film has a certain quirky charm to it however, while it may be a little bit bare bones there is some nice chemistry with some of the characters.

Jay Mandao (Dunn) discovers in the lead up to Halloween that he has gained the ability to astral project whenever he sleeps. While using this ability he accidentally meets the ghost of a man who has been recently murdered by the crazy ex girlfriend of his adult nephew Jackson (Sean McBride). Together they try and find a way to stop this death from ever occurring... 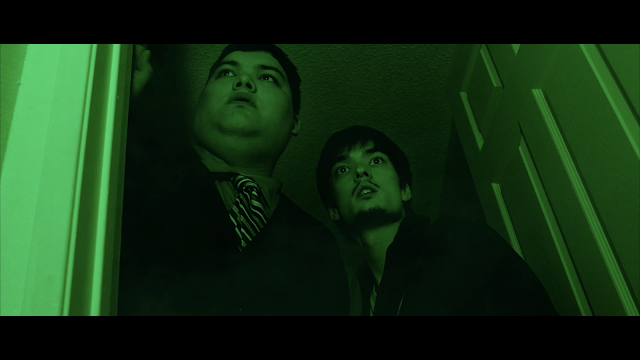 This is a comedy, but not in the traditional sense of having laugh out loud jokes and gags. Instead this is a comedy in the bright and breezy way dark subjects are covered, and the off-kilter world the character inhabit. Visually there are moments that made me smile, Jackson discovering a corpse and trying not to be sick was pretty amusing for instance. With the dialogue I liked that all the explanations for why characters know the weirdly specific knowledge they do is passed off with a convenient throwaway line that works due to this being a comedy.

Dunn is the stand out character in this film, Jay is just a nice guy and has some of the best moments here. Jackson is built up to be the main character, yet his character is irritating and his role almost pointless. I could easily see this changed around a bit to exclude this character completely. Jackson is portrayed as very gullible, stupid, work-shy and generally lazy, none of which comes across as endearing. Saying that though the fact that he constantly refers to Jay as Uncle Jay despite being older than him was quite amusing, I did like the odd couple relationship they shared. This has quite a small cast with other characters fitting in quite well despite their fleeting appearances. Sean Liang was great in his small role as Jay's cousin, Gina Gomez as the Uber style driver Fer fitted in particularly well also. 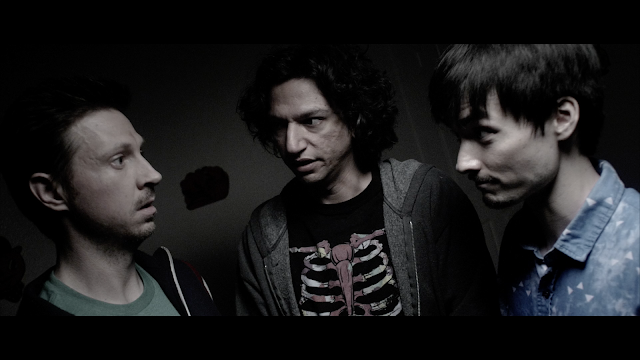 This is an indie film which is obvious from the low impact story that is handled in a way that is again light and breezy but with enough elements for it to be entertaining. I liked how disparate elements came together to birth the main plotline of trying to prevent a murder. I also enjoyed the use of time travel, that plot device always works well for me. There were some elements that didn't work so well though. One such being Jay getting 'stuck' while astral projecting, these scenes felt unnecessary. I also felt the ending wasn't needed, it added nothing and just seemed to be trying to set up a possible sequel. One last complaint with Mandao of the Dead's story is how the main thread gets resolved, it seemed most unsatisfactory with the resolution apparently taking place off camera.

While for the most part the effects are minimal there was a neat effect that played over scenes involving Jay when he was out of body, in fact all these scenes looked really quite good. The budget wasn't noticeable due to the tight story, and with good chemistry between the actors, a fun world to get a glimpse into, and a chilled ride Mandao of the Dead was an easy film to watch. Mandao of the Dead is currently exclusively available to watch on Amazon Instant Video, it is coming to iTunes in February 2019.

Posted by Daniel Simmonds at 15:50