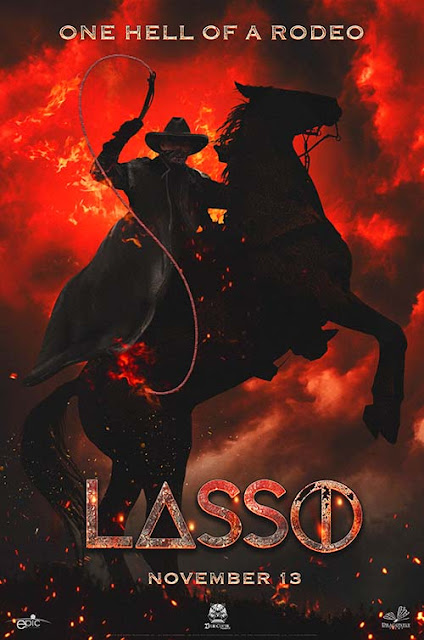 Kit (Lindsey Morgan - The 100) and Simon (Andrew Jacobs - Paranormal Activity: The Marked Ones) have brought a bus of senior citizens to a rodeo for a nice day out. Upon leaving at the days end one of the group realises they have left something of theirs behind and so Simon sets out to retrieve it. This delay in the groups departure however accidentally causes them to see the rodeo's dark side, with much of the staff, led by Pomroy Hacket (Thomas Cokenias - Birdemic: Shock and Terror) on a sadistic murder spree. Teaming up with some friendlies Simon meets, that include one armed cowboy Ennis (Sean Patrick Flanery - The Boondock Saints, Saw 3D: The Final Chapter) and buff bull rider Trish (Skyler Cooper) they must all find a way to escape the unfolding madness.

I have only seen a couple of Wild West style horrors and so I found the antagonists here to be a fun bunch. Their method of killing their victims is very appropriate to their day jobs with weapons used including pitchforks, spiked whips, branding irons, cattle prods, and of course the titular lasso. With a bunch of crazies on the loose there was no end of variation in the kills here which were always a lot of fun to see. This is all violent stuff with a lot of blood and gore to add to the thrill. Choice kills include a man being sawn in half with a rusty saw, a woman lassoed and then swung round and round until she connects brutally with a tree, and someone who is cattle prodded so much that his eyeballs explode! I would say these are by far the best parts of Lasso and thankfully they are plentiful with a high body count on both sides of the groups.

With this type of movie character development isn't high on the cards but still I found some choices of main leads to be weird. It almost felt like it was thought that some younger cast members were needed as while the seniors are made up of a fun bunch they are led by two terrible people. Early on Lasso splits into two separate plots with Kit and the old people, and Simon and his new allies. Both these young leaders are very flawed individuals, Kit is bossy yet inexperienced, Simon is someone I could see as being the weasel of the group in any other film. His character starts off as sullen and uninterested and throughout he remains very immature, constantly being negative, having little tantrums and basically being a right nuisance, not helped that the people he is with seem to want to follow his lead. Flanery though played a character I enjoyed, more due to his uniqueness than anything else. Starting off with just one arm things go a bit Monty Python 'Black Knight' for him that made his part be something really quite different. On the antagonist side of things they are mostly a bunch of faceless cowboys, the cowboy dressed in black being the most iconic, with the strongman and the leader being the other standouts. There are some good fight scenes with these characters that become very bloody in a gleeful way.

The story here is really bare bones with there being zero explanation for just why half the rodeo staff have gone bloodthirsty. I actually like that there is no reason given, I was half expecting a grand reveal towards the end but instead the bad guys don't really talk much at all. There are a few throwaway scenes of steroid use that could possibly indicate it was psychosis brought on by that. The lack of any real plot out of 'fight or flight to survive' means it does become a bit hard to really care about any character, but I still got a buzz out of seeing how it all got resolved. There were some elements that made scenes feel a bit artificial though, there's a really lazy set-up involving a torch being shined in Kits face repeatedly by various characters that stood out as one such example. Lasso also ends on a really odd note, Western in style, yet also surreal, ending on a freeze frame of a minor yet key character's facial reaction, kind of like how Unsane ended.

The only original feeling aspect of Lasso was the mash-up of killers and cowboys with the death scenes being the real highlight. The whole horror felt like a nostalgic throwback to a seemingly more innocent time and due to that I found myself getting some pleasure from this. Lasso is available On Demand, while it has also recently been released on Blu-Ray and DVD.