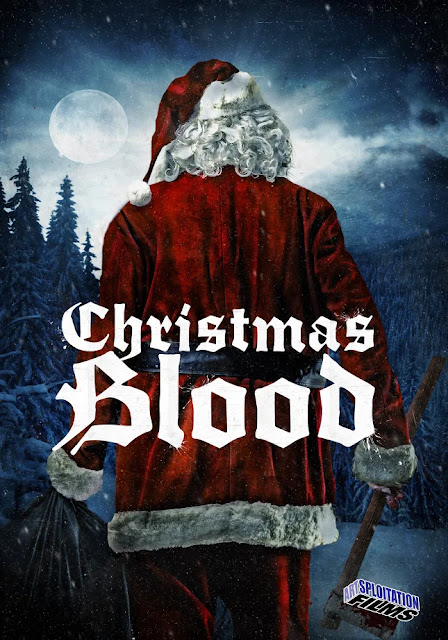 With Reinert Kiil's Norwegian horror Christmas Blood I was a little cheeky with regards to the list of films I have outstanding to review. Due to the obvious Xmas theme I it felt like it would be a good film to watch on Christmas eve and so I bumped it up the list. With the killer in this slasher being dressed up as Santa I thought this may be a comedy, much like what happened with Axemas, however this is far more serious than I expected, though there is black humour peppered throughout.

A serial killer who only kills his victims on Christmas eve is finally stopped after 13 years of terror in Norway and locked away in a mental asylum. Six years later however he escapes and sets out to complete his 'naughty' list he has made. Unknown to him the victim he has chosen is already dead, but the house she used to own is the location of a reunion party that a group of friends are having. Meanwhile a detective teams up with a former detective (Stig Henrik Hoff) who had been obsessed with capturing the killer, together they set out to stop him for good... 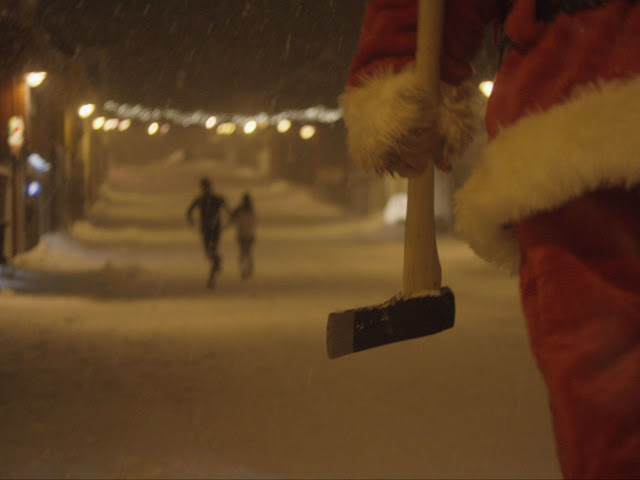 I really wanted to like this horror and to be fair I didn't think it was awful. It had a lot of good things going for it. Firstly like the snow itself the camera work and quality is crisp and clean adding an element of class to this. A big complaint I did have though is just how dark the movie as a whole seems. A lot of this takes place in poorly lit locations, from the outset to the end this was a problem for me, I constantly wished there was some sort of light source used to brighten up the surroundings as it could be hard to see what was going on. The group of partying girls are the usual assortment of character types, such as the loose one, the rebel, the good one etc. I liked the dynamic within the group as they really are not having a great time due to friction between some of them. None of these characters really appealed to me, I guess the mute girl was something different as it led to some good moments of her silently running without screaming as you would usually expect. The better storyline was that of the two detectives, I enjoyed the differences between them, the former one being an alcoholic slob, the other one being much more professional and highly strung.

Christmas Blood mostly focuses on the girls and the goings on around them with the second plot coming into focus now and again. There are also a few parts set in the past, the prologue takes place detailing the killers first capture, another scene shows the killer in action at some point in the past. These help add some variety. I haven't seen many Christmas slashers outside of All Through the House, Axemas and Stirring and so I found this aspect still to be neat. There are plenty of decorations everywhere while traditional music plays into scenes. The killers theme is over dramatic with pounding drums, but I loved that on occasion the drums actually match up with his heavy footsteps. 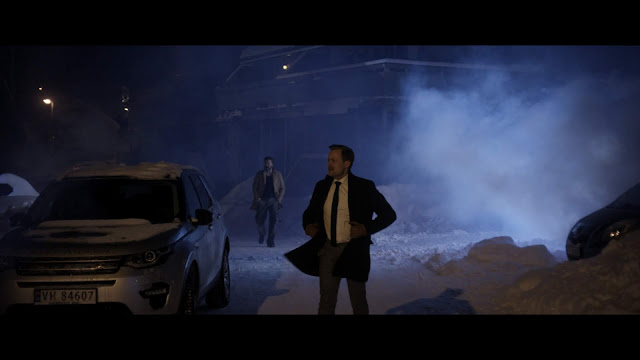 The killer himself I didn't think was too bad, I liked how it is suggested he might be supernatural in origin with lights flickering and the ground shaking when he is around, as well as the fact he appears to be unkillable. This may also explain how he is able to teleport around the small town in between scenes, or that could just be a required suspense of disbelief. It's not like he is the first slasher ever to seem to be able to be everywhere at once! His weapon of choice is an axe and it is put to good use with a wide range of ways he uses it, the best for me being when he swings it at someone trying to escape on a snowmobile. The few occasions when he actually speaks were also pretty memorable. The black humour comes into play with his kills, one victim has a snowman built around him so his head is sticking out the top, the killer keeps severed heads in his sack, and some of the blood from victims comes out in almost geysers of gore!

The special effects are practical which is preferable, on occasion I didn't think they looked that stunning. Intestines and severed heads both looked iffy, as did head wounds that seemed to bulge out of the head rather than go into the head (if that makes any sense at all). Blood is good at least with plenty of it throughout, and there are plenty of action scenes even if none are too inventive. The plot is simple but functional, yet I hated the way this ends, aping other slashers but in a way that felt a little unfinished rather than ambiguous, leading to dissatisfaction.

Christmas Blood isn't a terrible film, and I liked the snow filled Norwegian setting, yet I didn't feel completely on board with how this plays out. A little too dark, and maybe a little too serious, the killer maybe memorable, but much of the rest of the cast do nothing to make them stand out. Christmas Blood came out on December 11th thanks to Artsploitation Films.