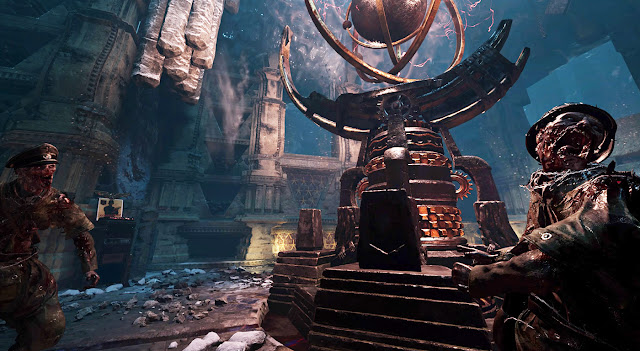 The downside to being sent so many films, books, and games to review on this blog is that it doesn't leave me much time to do blog posts about the things that interest me the most. That is not a criticism, more that the pressure of reviewing things in a timely manner leads to me neglecting things. The final Nazi Zombies map for Call of Duty: WWII is one such thing I have long neglected to cover. As well as the map itself I shall be talking about that years Zombies mode in summary.

The Frozen Dawn takes place in the lost city of Thule in Antarctica. Taking things back to normal after The Tortured Path experiment this is a traditional zombies map. Playing as Drostan, Olivia, Marie or Jefferson you open and explore the hidden city in order to find a way to stop the zombie epidemic sweeping the planet. To be honest I think I have played this map around four or five times in total. The final map for any Zombies game is usually the one that gets left out a bit, there are some stunning exceptions (Revelations being one such example, though if you are MrDalekJD it will be so forgettable you even miss it off a 'Ranked Maps' YouTube video, seriously, zero respect for that guy!). My issue with The Frozen Dawn is that it is very similar in look to Beneath the Ice from The Tortured Path. Both have you exploring ancient ruins beneath the ice and so it felt odd to have such a similar map. 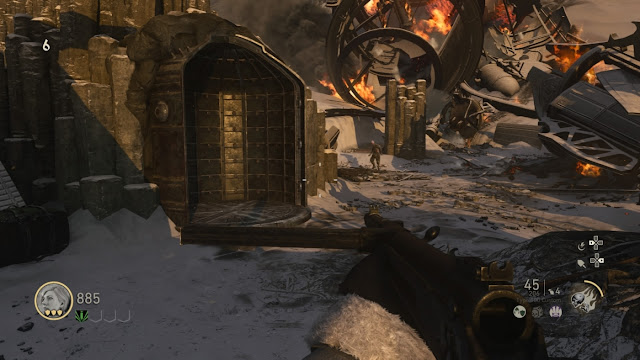 Starting off on the surface you work your way down into the depths of the underground city. The map is moderately sized essentially being a long loop. There are narrow corridors and cavernous rooms that are set against of a backdrop of immense size. From my limited time playing this it is ok, but then that is the problem with Nazi Zombies as a whole. This was touted as being the most scary and serious Zombies mode yet, on paper this sounded good. By being so serious though the mode lost a lot of the charm and actually become a bit stale and dull. This map is a perfect example as it is bland personified.

I did not mind The Final Reich, I loved the horror elements and I really loved that finally the game gave you steps towards the elusive Easter egg mission. Due to 'hardcore' player complaints this really useful new addition of listing the steps were removed for the subsequent maps. With the steps gone so did me and my friends enjoyment and desire to play the maps. It is frustrating more than anything having no idea what you are meant to be doing. It didn't make us want to play the maps more, it did the opposite and made us just give up. 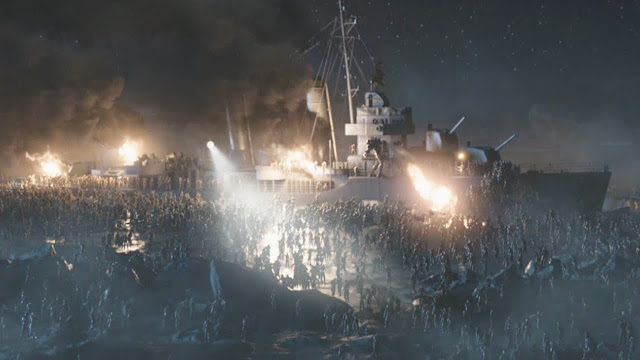 Changing up the formula so much for The Tortured Path also seemed a weird decision It felt like the developers were unsure what direction they wanted to take the game, though I am happy that this season there were eight maps, even if four of those were quite small (Grosten Haus has become my catchphrase of the year for describing any bad). As a game in its own right this isn't bad. As a Zombies mode though it is sadly the worst one, it just isn't that much fun to play often being frustrating more than anything. The maps are not bad, there is fun to be had here, but why play this when there are so many better examples already out there?

Posted by Daniel Simmonds at 11:43