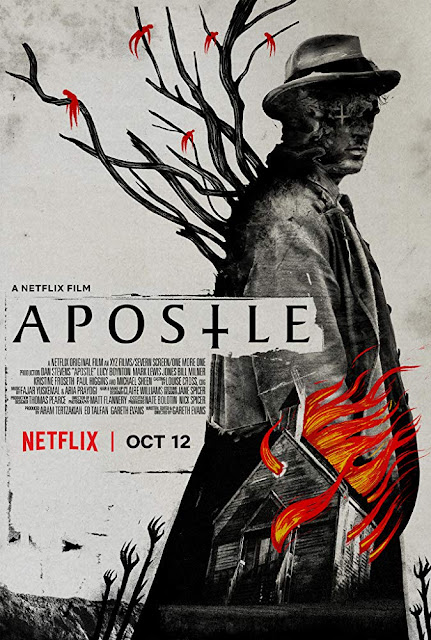 As it is the time of year for the Fright Meter Awards nominations I once again find myself watching a horror that I might have missed otherwise. Apostle is up for awards in three different categories. Dan Stevens is up for Best Actor In A Leading Role, Michael Sheen is up for Best Actor In A Supporting Role, while the film itself is nominated for Best Costume Design. This film takes place in 1905 which is one year earlier than Winchester which I reviewed last week, just stating that as a pointless observation.

So it is 1905 and drifter Thomas Richardson (Stevens - Downton Abbey) has been tasked with heading to an isolated island which is the home of a strange religious cult. He is going there as his sister has been kidnapped by the cult, with them demanding a ransom for her safe return. Upon getting to the island he discovers the cult has a bit of a sinister side to it with torture used for anyone who goes against the rules, and blood letting that is required by the worshippers. The leader of the cult: Prophet Malcolm (Sheen - The Twilight Saga) believes in a Goddess who is able to bring fertility to the land, it turns out this Goddess might actually be real... 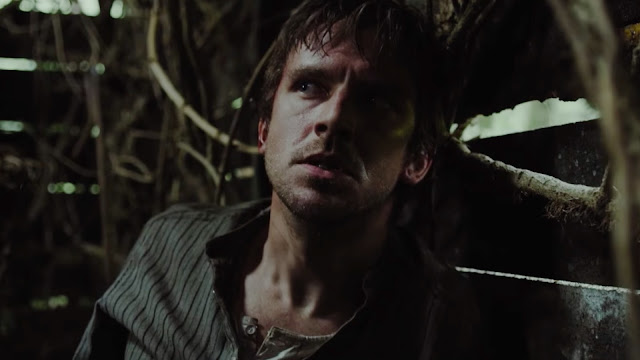 Apostle is quite a bleak film that has little joy going for it. The protagonist Thomas is the poster boy for this bleakness in that he constantly looks and acts like his every waking moment is pure torture (he does have a good backstory at least). For someone who is supposed to be on a secret mission he doesn't do much to fit in, doing a poor job of hiding his real objective. The characters here are all hard to like with many being downright villains. I guess Andrea (Lucy Boynton - Don't Knock Twice, I Am the Pretty Thing That Lives in the House) is the most relatable being as she is the voice of reason on the island. Everyone does a good turn here though as bleak as everyone acts the acting is all solid stuff, both Stevens and Sheen deserve the nominations they received, while the rest of the cast also fit in well.

In spite of this good acting, as well as good directing by Gareth Evans (The Raid, The Raid 2) I confess I did find this all a little bit dull. This was all so serious and unhappy that I did find myself not really caring what was happening. There were some really tense moments mixed in with all this, a religious text reading scene, as well as a more gruesome similar build up of tension later on were executed really well. It wasn't until the finale that I really started enjoying what I was watching, with the supernatural elements brought to the forefront. Weirdly enough the plot reminded me of Resident Evil 4 with an outsider infiltrating a cult to rescue someone, no bad thing. I also liked how the cult itself is in full meltdown regardless of the actions of the protagonist, an underlying plot thread that gets brought to the surface as the film progresses. On the subject of Resident Evil there is a character here who really reminded me of an enemy from Resident Evil 5, a skinny man with his head wrapped completely in rags that featured in a scene that was quite gory to watch. Fingers even got severed. 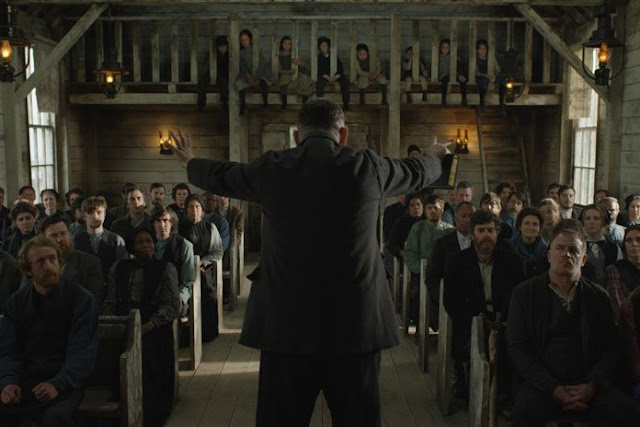 At two hours long this did drag a little bit for me, despite things happening and story moving forward it just felt a bit too meandering, there was a tiny bit of a feel of The Wicker Man to this, but this cult is far more subdued and morose. The special effects were all good though, plenty of blood and violence when it is called for, and this was atmospheric which is always good. Personally I wish there had been slightly more supernatural stuff in here as it felt a bit under explored, being as it was the most interesting part of Apostle.

This was well made with good acting yet it was also something that I didn't feel did enough to capture my attention. Despite a great finale this outstayed its welcome a bit, and missed opportunities to be legitimately creepy (that is aside from one great scene in a sewer!). Apostle is currently on Netflix.