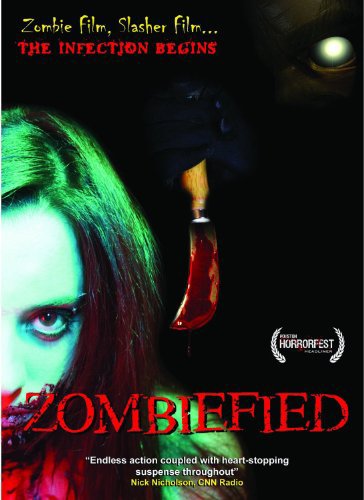 Zombified was directed and written by Todd Jason Cook who also co-stars in this. While the story felt kind of like it was a sequel to something I assumed this was all just in world. Turns out doing a tiny bit of research that there was actually a previous film in the series, way back in 1995 with Death Metal Zombies. This features a couple of the same characters, and the same killer, but thanks to flashbacks, accounts and historical documents it isn't essential to have seen that one I feel.

A serial killer wearing a Richard Nixon mask (Tayvis Dunnahoe) enters a club and mixes in a special cassette tape labelled 'Zombified' to the music that a rock band is performing. The frequency on this cassette transforms everyone there into flesh hungry crazies who soon pour out onto the streets. A few survivors that include among them Alana (Rebecca Torrellas), Tony (Cook) as well as Angel (Kathryn Rene' Ginzel) and Tommy (Mike Gebbie - Death Metal Zombies) band together to stop the madness. Thankfully due to Angel and Tommy having encountered this situation before they know exactly how to deal with the flesh eaters part, it is just the psychotically strong and deranged serial killer that is the real problem. 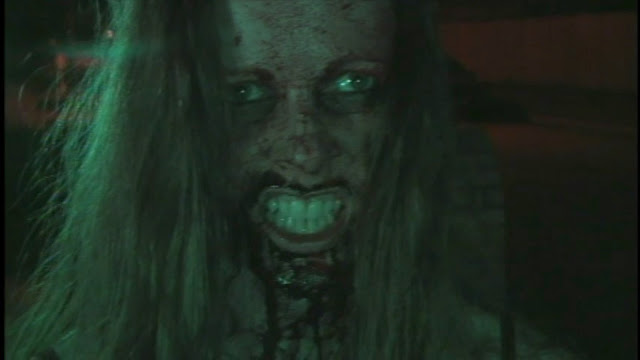 This was quite a low budget film that featured acting that while never terrible wasn't stunning either. It was quite a dark film with a bit of a blurry look to the footage quality and one that featured a heck of a lot of generic rock music, especially during the many action scenes. However I found the mix of slasher film and zombie film to be an interesting one, it certainly had some highlights when the two combined. This felt a bit like the low budget, indie horrors from early this century, though with an added bit of quality that mostly stopped it being dull. It did fall into the trap of being slightly over long, at an hour forty five minutes it did start to get a bit dull towards the end with a few too many scenes that while action packed did feel like they didn't add anything to the movie. One that comes to mind is when one of the protagonists heads outside his house to have a drink and immediately gets attacked by the zombies. With it known that the ghouls are roaming around outside this felt like a ridiculous decision created only for some more fighting.

The zombies here are mostly just slightly more pale, and caked in blood. Within the context of the story these people are not actually dead, more that much like the radio frequency in the great horror game Condemned: Criminal Origins they have had their brains altered in some way that has made them act like zombies. These are of the running variety and so charge around everywhere, they have a habit of leaping in off camera to attack. There are plenty of shots of the zombies eating victim's intestines, and unlike most zombie media the victims don't come back to life as the undead...what with them being eaten by crazed humans and not walking corpses. This also gave the interesting angle of the 'creatures' being able to be reverted back into normal law abiding citizens via a plot device. Comically the vast majority of these people are murdered anyway via knife wounds, bricks, and in one memorable instance a garden rake to the chest without any sort of remorse by their killers! As these are altered humans they don't take too much to stop and can even be knocked unconscious. 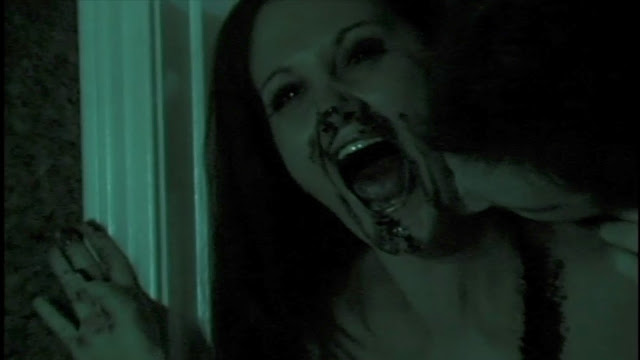 The other part of Zombified, and one which works a lot better is the Richard Nixon serial killer. At first I wasn't too sure about this character, he seemed a little short and stocky and the mask stupid looking. However I came to really enjoy his scenes, like slasher greats like Jason and Myers he is strong, silent, and seemingly unkillable. Along with his trademark finger point whenever he is angry, he is also able to control the zombies which makes for some great scenes. There are various weird scenes of him using mannequins to set up kills, and the fact that he is able to create more altered humans whenever he likes means he is dangerous to be around.

For all the flesh eating and slasher kills there is a whole heap of blood, while this seemed to be quite cheaply made that sort of thing doesn't matter when it comes to the zombie genre (and indeed the slasher one as well). There is lots and lots of blood here, usually pouring out of victims wounds which added a lot to the movie. Sadly as I said the music really was bland as anything. The plot was interesting I felt, but also quite basic, I did enjoy nothing was really explained, as did I enjoy the credits playing out over the final image of Zombified.

This is a film designed to be trash, it has average acting and a lot of gore to cover up the special effects constraints, it has female nudity and a high body count, but it also has some nice ideas to it, combining the slasher and zombie genre actually worked out pretty well, while it did drag at times and was quite murky I felt it was still fun if your expectations are not high. Zombified is now available to rent/buy on Vimeo On Demand.