I really don't use my PSVR device as much as I should, it is always the case that I forget just how amazing it can be until I actually put it on. Also it is sad to admit but I hate being removed from my phone, in VR I don't hear any texts or calls and so I get a pathetic sense of anxiety! I played the Transference demo last week for Halloween and found it be darn scary, luckily for me a couple of days later the game proper went on sale and so I quickly snapped it up. While Transference isn't as scary as the demo was it was still an enjoyable couple of hours.

The story is a bit abstract with it spread out in snippets throughout the game, I will sum it up but this is just my interpretation. Raymond: a brilliant scientist has created a 'transference' device which is able to transfer the memories and souls of people into a digital recreation to act as a sort of eternal heaven for them. You play as an unknown person who has found his device and travelled into it where you find out that Raymond, his young son Ben, his wife Kathryn, as well as the family dog Laika are all now residing. However far from be a heaven this unnatural reality has turned into living hell for each of them, each of the family members trapped in their own perpetual nightmare. It is up to you to find each of the crystals housing their essence and reunite them to fix the corrupted device.

I'm first going to mention the demo as rather than be a slice taken from the game itself it was a stand alone experience. Transference: The Walter Test Case was a fantastic fifteen minutes of tight creeping terror. In the demo you are exploring the mind of a PTSD suffering soldier and his abused son. There were jump scares, but more importantly there was a pervasive sense of dread with the sound in particular being a real highlight. I didn't review it at the time but it would have gotten a 9/10 due to not only being free, but also in how effective it was due to a combination of amazing 3D sound design and how well the story is told. It was also brilliant in how it skipped between two different time frames: that of the son as a loving child, and him as a bitter teenager.

Due to the demo I had very high hopes for the game, maybe it is the longer length but the persistent feeling of terror just wasn't there for me. I say maybe the longer length but the astounding Paranormal Activity: The Lost Soul managed that for me. That isn't to say it can't be scary at times, there were a few key scenes that made me feel very uneasy, usually due to the sound design that would work in tandem with the messed up visuals. By the time I got to the finale it could sustain a feeling of pervading doom. The majority of the scares here are of the jump scare variety. As you traverse the apartment Transference takes place in you come across the ghostly images of the various family members, these usually pop up at the end of a corridor before running off and never failed to make me shout in fear. To give it credit this was the first VR horror game where I actually closed my eyes out of fear, the particular moment was when an angrily barking German shepherd charged at me, made more freaky in that it was running across the ceiling! 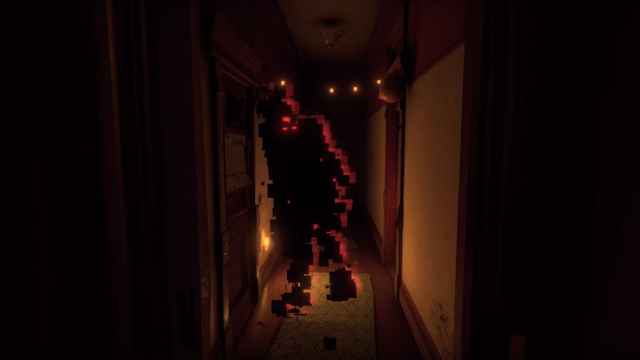 The apartment the majority of the game takes place in is quite a small location but in a Silent Hill style twist there are actually three different realities all taking place in the same place that are accessed by flipping light switches. These realities each house one of the cursed family members, in Ben's nightmare he is lost and alone desperately looking for his parents while pursued by a huge black glitch monster. Kathryn's nightmare has her envision the apartment as a prison, the wooden doors turned steel, barbed wire wrapped around furniture. Raymond's nightmare meanwhile has him going insane trying to fix the broken Transference device, the apartment walls covered in complex mathematical scrawlings, computers and wires everywhere.

You are unable to die in the game, instead progress is made from solving puzzles that while never head scratching did make me vaguely have to use my brain. Setting a radio to the right frequency, putting the correct time on a clock, solving a password combination from scraps of paper floating around a room, all were easy but still fun. Saying that there was one section of Transference where I was nearly ready to give up, trapped in a single room for around twenty minutes completely stumped until I stumbled across the way to leave. That is a slight complaint with the game in how linear it is, while new rooms do open up as you play often many of the rooms will remain locked to funnel you down the right path. There was some nice Layers of Fear type elements of rooms changing around you, such as going to leave the kitchen to discover the door you entered from is now a cupboard for instance. 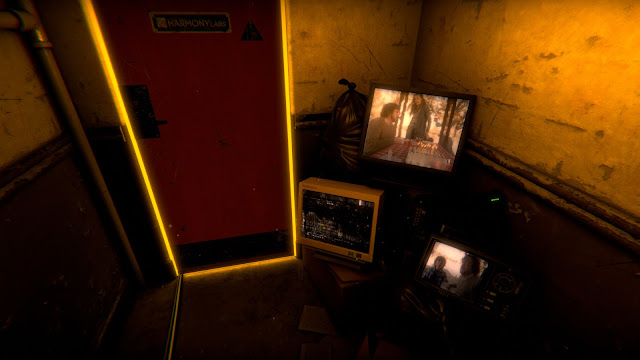 The story is one part where this really excels due to the use of live action video recordings. Laptops and TV screens burst into life to show you segments taking from recordings of the family before this event all happened. I loved how the live action cutscenes were shown in game, it gave a sometimes disturbing look into the unhappy relationship the family had, and how as you play it become obvious how fragmented and abusive this family was. Raymond being the main culprit as his research into the Transference device led to him neglecting his wife and child. Audio recordings also help with filling in the back story but for me it was the visual recordings that left the biggest impression, this was the best element of the game for me. Full length versions of these clips are hidden around the game and are well worth watching for what they add. For me though the themes and story never went as dark and horrific as the demo did so I was disappointed that it didn't as that story was far more messed up, and actually better handled.

I did like Transference, it was a decent enough VR horror game (also playable without VR of course) but it was a victim of what came before with it never reaching the highs of The Walter Test Case. The sound design is astounding at times and really helps bring in the horror, however for the most part it seemed to rely on jump scares rather than a more intelligent method of claustrophobic dread.

Posted by Daniel Simmonds at 02:36