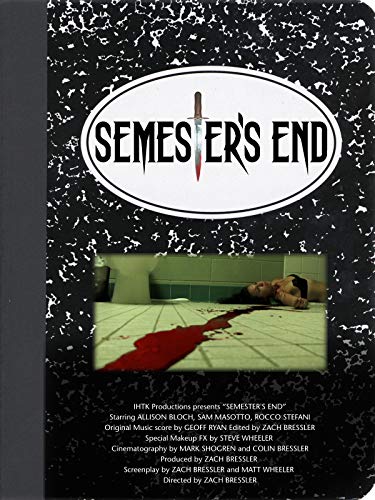 Semester's End is a low budget indie horror that uses the classic idea of a slasher operating on a college campus. I wouldn't say this is a good film, the identity of the killer is painfully obvious from the start, no one seems to act that naturally and all the kills either take place either off camera, or in between scenes. However at 70 minutes this doesn't outstay its welcome at all and was not actually something that was a hard watch, it was entertaining regardless of the overall quality.

Allison Bloch stars as Rachel: a teaching assistant at a college, a college which is being plagued by a serial killer. No one, police included have any idea who is doing this foul murders, but in the world this movie takes place in no one is really that bothered either. As the body count rises Allison and her new lover Mike (Sam Masotto) find themselves caught up in it all, but just who could this deranged slasher be?

I genuinely did not mind this film at all, it had a lot of issues but regardless I was not the slightest bit bored, in fact the opposite, in a trashy kind of way this was great. The main issue was just how all the characters act in Semester's End, no one seems that worried that students are being picked off by an unknown assailant. The police presence seems to consist of one clueless gruff detective, so incompetent are they that their prime suspect: the lecturer that Rachel assisted went on the run from the law...but never actually left the campus. Rachel the perpetually horny tutor is a weird protagonist, having just came off an affair with a married man her next lover is a student from her class and sees nothing at all wrong with this. The student Mike looks older than she is and again seems nonplussed about all the murders. Both of them are happy to cover up crimes of their own without a care in the world, maybe it was a secret aspect of the film that the campus was a special place for sociopaths to study?

Disappointingly the slasher themselves is never really shown at all, the few murders typically end with the victim screaming while facing the camera before cutting to the next day with the news reporting a fresh killing. There is stone clad form for using a POV perspective for the slasher (such as Black Christmas, Halloween) but usually there is more than just the lead up to a kill. This was likely done to save budget I would imagine, and there is one nice next day view of a corpse, but it seems a bit of a cop out that all the killings in a slasher take place off camera for the most part. I'm not totally sure if the twist was a twist, or if the movie was designed for the viewer to know from the outset the identity, but when it happened it wasn't so much "oh, that's who I guessed", more "well, duh, obviously". To its credit there are various different possibilities put out there, could it be the creepy janitor? the lecturer on the run? and a few more are all set up as possible killers but there was never any doubt in my mind.

Without actually seeing the killer do his work it was up to nightmares Rachel had to try and create some horror. The nightmares are were the blood comes into play with zombie like victims stumbling around, and at least one seemingly concrete identification of the real killer, but then they all end with her waking up in bed. The film as a whole had a grayish murky look to it, and for a college campus the cast was scarce with just a handful of main characters. The score was ok, it sounded a little made for TV but it did the job fine enough. The plot was uneventful with no real explanation for why the person responsible was doing it.

Semester's End was a film that I had fun with, the actors all seemed about the same in their performances which helped give a unified feeling, and I liked how liberal and free Rachel was portrayed as, it was nice to get a protagonist who wasn't all sweet and innocent as most are in these types of films. While this did have a lot of issues, and technically isn't great, if you go in to this with the right mindset there is legitimate good times to be had. Semester's End can be purchased in the USA here, UK here and the rest of the world here, if you are still undecided check out the trailer below.

Posted by Daniel Simmonds at 15:51