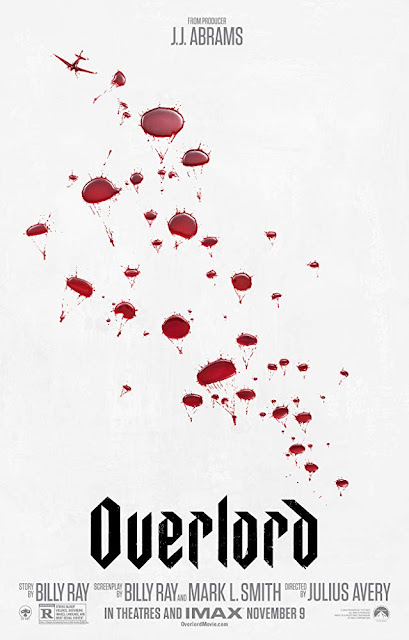 When I first saw Julius Avery's Overlord advertised at the cinema it was a nice surprise yet I can't say I was too excited about it. This was weird as zombies and World War II are two of my favourite topics and so a blend that brought them together like a live action Call of Duty: WWII: Nazi Zombies game should have had me shouting with joy from the rooftops. Despite my lack of abject enthusiasm I decided to check it out, and really, it wasn't that bad.

It is 1944 and a squadron of American soldiers are being flown into France. D-Day is due to take place the following day, but for that to be successful a key radio tower needs to be destroyed so that air support can be given. Under heavy fire many of the planes are shot down, it ends up being just five soldiers who survive the ordeal, these include rookie with a conscience Boyce (Jovan Adepo - Mother!) and his group's commanding officer, a seasoned soldier named Ford (Wyatt Russell - Black Mirror 'Playtest'). Meeting up with local girl Chloe (Mathilde Ollivier) the survivors make it to the village nearby the radio tower that is situated at the top of a large church, however their plans to destroy it are hampered by the fact that unspeakable experiments are being conducted in the church's basement, experiments that can bring the dead back to life...

I didn't expect to get what I wanted but I would have liked hordes and hordes of undead to be featured in Overlord, instead there are about five to ten in total. I can't say I was disappointed as the trailer didn't make this seem like it would be full of undead. The whole zombie aspect is a key plot line here yet despite that this is about 75% war movie and 25% horror. This is more war from a Quentin Tarantino Inglorious Basterds exaggerated perspective with a few over the top characters, and heroes who are strangely competent for relative newcomers to fighting. The key antagonist here is Nazi commander Wafner (Pilou Asbaek - Ghost in the Shell, Game of Thrones) who is imposing enough before he is turned into more of a two dimensional being. The Nazis in general lack much character to them, aside from Wafner there isn't anyone else of note, just faceless soldiers and scientists.

On the hero side Boyce and Ford are the characters that had the most interesting stuff happen to them. I particularly liked the predictable, yet fun character arc that the former went through, getting battle hardened, yet even at the end still having a compassionate and caring side that Ford doesn't exhibit as much. People turning into monsters is a topic that works well with soldiers, in particular the Nazis, and so you get the sense that like the infected losing their humanity and becoming mindless killing machines the same is said of the soldiers fighting. There are elements of horror to be found here, Boyce's initial expedition into the church's basement for instances has some tense build ups, there is a great scene in a loft that reminded me of something out of The Thing, and a nice undead corridor chase for instance. I figured this would be something like the great Deathwatch ( a World War I based horror), something which relied on build up and anticipation, instead this is like Kelly's Heroes or something with constant action throughout, yet as I said there are only a couple of scenes that actually have the protagonists battling undead.

Holding this together is crisp camera work and some lovely special effects and make-up effects. The intro that saw a vast plane and boat invasion force getting obliterated was really exciting to watch with some nice effects, but this pales in comparison to the great effects on the infected, specifically the main one who has half his face missing. Coming across like a film version of Return to Castle Wolfenstein the plot isn't anything special but it is a decent enough yarn, while being very predictable in how it plays out. There was one scene were a character turns his back on some soldiers shooting in order to do something specific, I thought that he was bound to get shot in the back, and sure enough in slow mo he does. It's times like these that pop up time and time again that remind you that while a good film Overlord isn't great, held back from being that by a lack of original ideas at times.

Overlord succeeds due to the great special and make-up effects, everything looks great here, from the machines corpses are hooked up to, to the painful looking transformation scene, and plenty of violent fighting. With a likable cast and good performances all along the board this may be predictable stuff but it is still entertaining to watch, even at nearly two hours long this story did not get boring.

Posted by Daniel Simmonds at 15:52