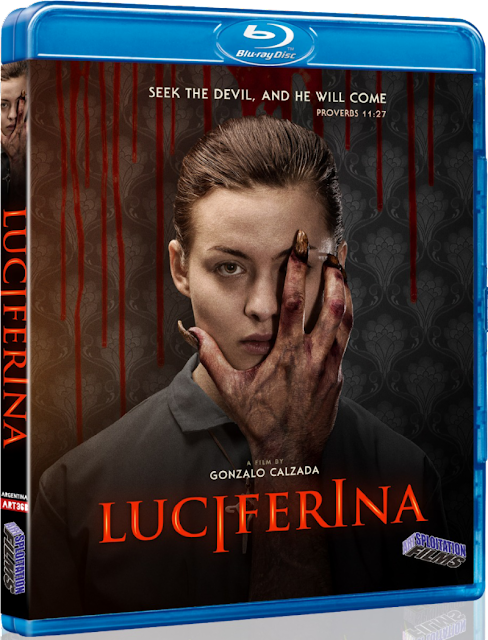 Luciferina is an Argentinian horror film that deals with demonic possession. This sub genre is one of my favourites and so I was pleased when this started and it looked to be a movie that had a lot of care and attention, as well as quality put into it. The question is, could this sustain the atmosphere it created throughout the entire 111 minute run time?

Natalia (Sofia Del Tuffo) is a 19 year old novice nun who one day receives the news that her mother has died, and that her father is seriously ill. Reluctantly she returns to her troubled childhood home where she learns her mother attacked her father before killing herself. She also discovers her sister Angela (Malena Sanchez) is not in a good place, bitter at Natalia for leaving her alone, and with an abusive boyfriend she is convinced that their home has an evil force in it that has cursed their family. She tells her sister that herself and some friends from college are planning a trip to a remote jungle island where they are going to take ayahuasca (a sacred psychoactive plant) in order to be able to cleanse and identify this evil. Worried about Angela's safety Natalia decides to go along as well, but on the island things take a change for the nightmarish when a demon is revealed...

This was so well made and so effective that I felt for sure this was going to be a horror I loved, and for the first three quarters I really did think this was brilliant. There is a Jacob's Ladder style feeling of a waking nightmare about this that builds up a lot of atmosphere. From the moment Natalia returns home things seem off kilter. She has dreams of a twisted woman in white, she has the bizarre incident with her parents to cope with, and the hate from her sister. The trip to the island I knew would lead to bad things happening, showing their boat ride there builds up the isolation of the place. It is then given interesting backstory right away that goes in tandem with the beautiful and creepy ruins of churches and statues that litter the tree filled lonely place. The whole lead up to the ayahuasca trip was so well done. The characters while Spanish in their language really seemed intense and believable, the bad vibes are very evident and really not the best mindset to be taking drugs with. There was just a feeling of menace and danger.

The trip itself was the highlight of Luciferina, the decrepit location looked great, with perfect lighting and the whole ceremony was drawn out with each character in turn taking the drug. The scenes of each character surrounded by candles writhing around on the floor created so much atmosphere. From here on out the craziness just intensifies, both with Natalia's trip itself that gave her visions of a demonic ritual, to her return to find out the real world has gone extremely dark. This whole middle part of the film was just near perfect, this was horror done right with a sustained feeling of trouble that worked so well. There were some pretty messed up moments that really surprised me with how much of the cast are out the picture so to speak. After this it becomes slightly more traditional with scenes of exorcism but again it was just so well made, beautiful to look at, the set design was just stellar. 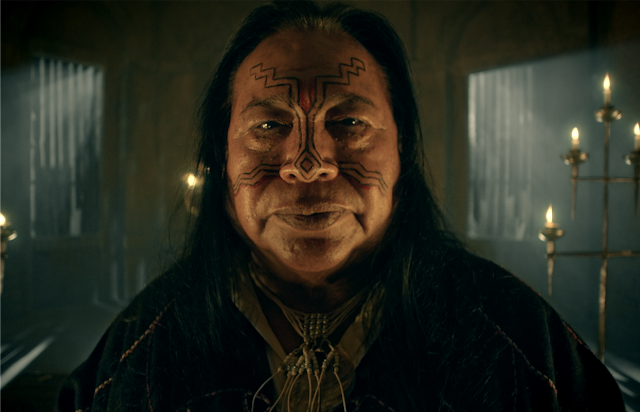 Then came the final part of the film and that was where this lost me. The story was always slightly obtuse with things never really explained that well. I liked the mystery of it all, how as a viewer you are left to keep guessing but it leads up to an unsatisfying finale that while different was also a little less exciting than I had hoped for. It is around a five or so minute segment that just seemed to go on too much, I didn't much care for characters motivations and I felt the possibility of horror had eked away a bit. Regardless throughout I was really impressed with the special effects, the practical ones at least. There is a body count, corpses with their eyes ripped out looked great, and the effects for the demonic possession also shined. It all seemed so visceral and raw even when people are floating! I would say the CGI used to show a baby in the womb was not the strongest and I found it a bit off putting how unrealistic it seemed but I can't see how else they could have shown these scenes.

Pregnancy and everything around that topic is a constant theme throughout Luciferina, from uterus like paintings, to topics of abortions, rape and childbirth this is integral to the story the film is trying to impart. This fits the bleak tone that the movie revolves around featuring as it does a whole bunch of flawed characters. While there was a nice sustained feeling of impending doom in the middle half there were also a bunch of jump scares which get a pass only because they were not the only method used. There were some decent camera tricks with perspective a few times which helped lend this a dreamlike feel.

Luciferina was nearly a fantastic film but for me I just didn't really enjoy the way this ended and maybe the plot was a little bit too confusing. Regardless this is high quality with some great special effects and great atmosphere, when it was at its best it really did shine bright, and so I am thankful I got to see this. It may be a bit pretentious at times but I feel it is still deserving of its high score. Luciferina is released on Blu-ray and DVD on November 20th, it debuts on Digital HD on December 4th.