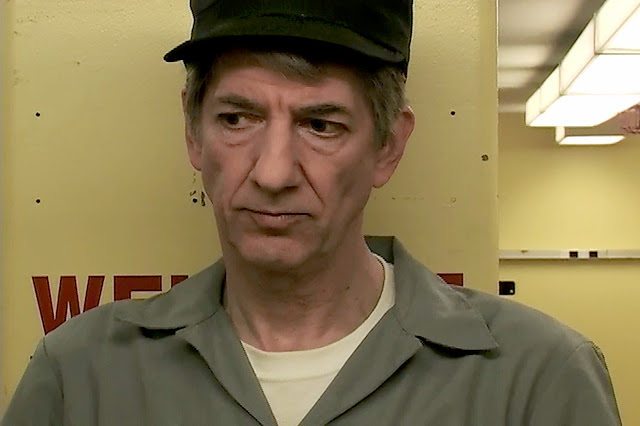 Low is a short horror film that clocks in at just under 6 minutes. This features no dialogue, and just the one strangely likeable character but it tells a concise little story well. It was the first film that was directed and written by Jon Salmon who is best known for his cinematography work.

An electrician (Russ Kingston - He's a Bleeder) is down in the basement of a library fixing a fuse box, glancing at his work diary he is dismayed to realise that except for a day off for his birthday he is working all the way up to and including Christmas. Hearing a strange noise he goes off to investigate...

For the first four minutes this steadily increased in tension with things feeling more and more suspenseful as the electrician investigates the odd sound. I was expecting a jump scare like zinger but instead it takes a more positive bend. I really liked how this started and ended, showing the electrician in a lift descending and ascending but tiny with most the screen being black.  Effects are kept to a minimum with sound used to indicate what is going on.

I thought Kingston was great here for a role that required no dialogue, I think maybe I identified with him being overworked so was on his side. The real moral here is that perhaps there is more to life than work with the horror aspect maybe being an analogy for living life to work rather than living life to live. I enjoyed the pacing of this with my only complaint being a moment of protracted darkness that lingered a little too long. Low is free to view online so I will include it below.