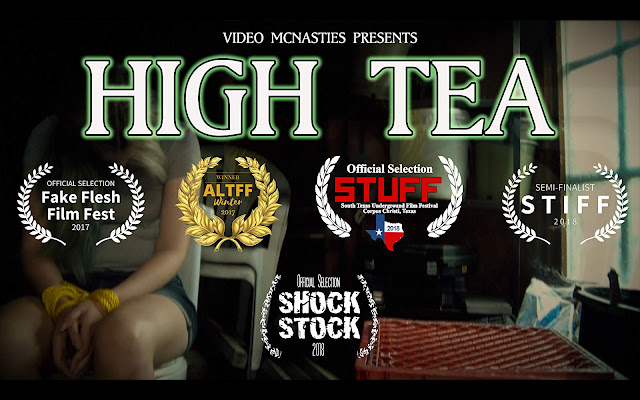 The award winning High Tea is a short Canadian horror film that was directed, written, and produced by Luke Meneok. It is very indie with a budget of around £155 (when converted into pounds) according to the IMDB page. This single room horror uses a traditional idea of a masked madman setting a task for his victim but this time around it is slightly different.

Tina (Courtney Make) wakes up to find herself tied up in a shed with no memory of how she got there. It isn't long before a masked man (David Kolenski - Blackbags, The Ojibway Switchback) enters, he tells the girl that if she is able to roll the perfect joint she will be free to leave, she has three attempts, but should she fail...

The very fact that to survive the victim has to roll a joint means this is very much a dark comedy horror. They could have even made that serious but there isn't really a sense of peril in the sinister sense, the masked man ('The Meathead' according to IMDB) has anger problems but appears quite impotent when it comes to threatening behaviour, banging his fists on the table in a way that even the victim doesn't find that intimidating. On the subject of Tina; while she is tied up my an unknown madman she never really seems that much scared at all, apart from when Meathead first appears, I guess this was purposeful but did take away from the horror a bit, after all if she isn't scared then why should the viewer be scared for her?

The meat(head) of the short is her trying to roll a joint, of course to be suspenseful she doesn't do it on the first attempt. This whole sequence was a lot of fun, I especially liked the visual effect that compliments one action. I also liked the editing here, there are lots of splintered almost jump cuts, and it was great how the camera would shake in time with Meathead's anger, and also how the music would change to reflect this anger. He was a fun character and this is actually the third appearance for him, appearing in the other two films I mentioned for Kolenski earlier in this review. He has a dorky look to him which is helped by his distorted voice that reminded me of a villian from Saturday morning cartoons.

High Tea was a fun little short that gets around the small budget by utilising what it does have. Even with the twist of rolling a joint there wasn't much surprise in how this played out but I did really enjoy 'The Meathead', he was an entertaining antagonist, and I did like the unique editing and camera work, so not bad at all.