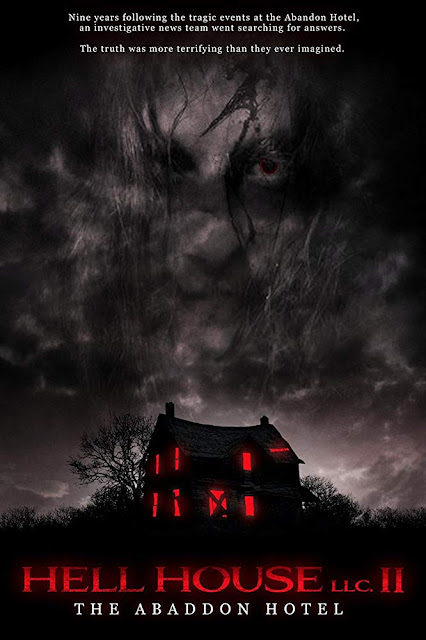 Hell House LLC was a pretty great indie found footage that never really left my mind and so when I heard there was a sequel coming out (a Shudder exclusive) I was excited to see where things would go next. Hell House LLC II: The Abaddon Hotel isn't as good a film sadly, it left me feeling a little bit cold.

After receiving an anonymous tip investigative journalist Jessica Fox (Jillian Geurts) comes to believe that hidden in the basement of the notorious Abaddon Hotel (where eight years previously the opening night of a Hell House attraction led to the unexplained deaths of fifteen people) is evidence that the hotel's original owner was part of a devil worshipping cult. She assembles a small team to head into the place, retrieve this evidence, and get out. They include among them cameraman David (Dustin Austen), Molly (Joy Shatz), spirit medium/TV personality Brock Davies (Kyle Ingleman) and his cameraman, and most importantly Mitchell (Vasile Flutur) who worked on the documentary that the original film was styled as. 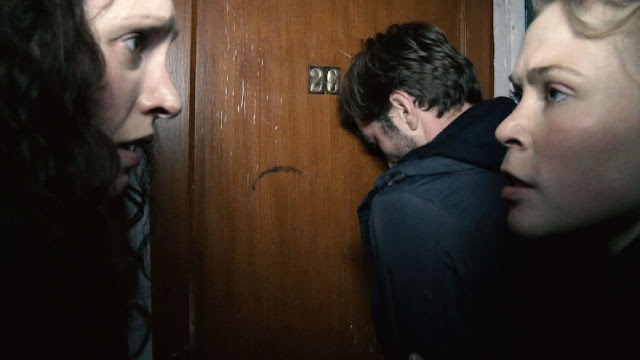 So while the first film was set out as a documentary this time around we get some initial text saying that the footage shown has been edited together by an unseen character. This time around it isn't a documentary but more a traditional found footage even if it has other elements sewn in, the biggest one being a talk show that Brock, Mitchell, and an Abaddon town councilman appeared on discussing the hotels dark past. The problem with this Frankenstein's monster of editing means that at times it can feel very disjointed, especially early on where rather than any sort of plot it is just different video footage of random people over the years entering the hotel and then getting Blair Witched (the camera suddenly falling to the ground I mean). These segments didn't really add much at all other than to suggest it is a death sentence to go there, something which is obvious anyway. I couldn't really tell if these were all here to pad out the run time. Then the talk show sections are so brightly lit that they feel jarring whenever they show up and drag you out of the horror.

It is around half an hour into Hell House LLC II that the main plotline really starts and there was a certain thrill knowing that this great location was going to get its time to shine again. The characters were a real mixed bag though with some dodgy acting. Worst of all the characters was Molly who appeared to be a child trapped in a woman's body, she acts like a kid and her colleagues all treat her like she is a kid, everything about her irritated me no end. She runs with her arms flailing out to the sides, completely over reacts even before much of note has happened, and then is used as a plot device to get characters to leave the safe place they had holed up in. This character ruined the majority of the scenes she appeared in. Ingleman was great as Brock, I enjoyed his showman style act and his arrogance was great, was just a shame he didn't get too much screen time, though does get the best scene of the movie. Geurts was also decent as Jessica, I especially liked the Book of Shadows: Blair Witch 2 style police interrogation scenes mixed in that took place after most the events of the film. I found the character of Mitchell to be a bit patchy, for someone who really knows how dangerous the hotel is he really doesn't take much convincing to head back there, or even seem that bothered he is there until the moment the terror starts. 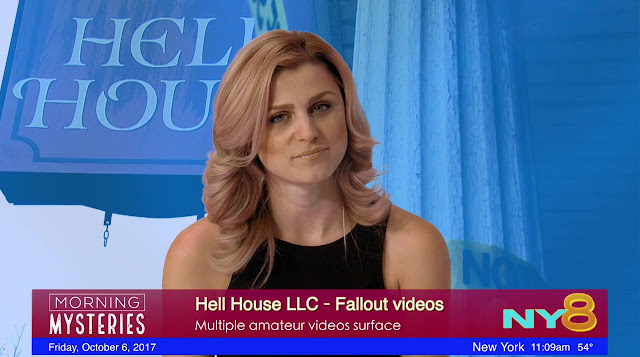 I couldn't shake the feeling that in this sequel everything felt a little bit aimless, it felt like it was mostly a set-up for a third film and apparently this has been envisioned as a trilogy. It was fun to have the hotel appear in another film as it is a creepy looking place but the motivation for people being there was a bit patchy. Hell House LLC II is at its best when it references the first one, new scenes of the characters from that one were a nice touch, it was cool the original actors came back to reprise their roles for those little bits, along with actual scenes from that one replaying here. I think this is in danger of losing the mystery, the story was well on its way to giving an explanation for everything, and the decision to have an actual antagonist masterminding the horror as opposed to demons or ghost or whatever wasn't one I would have gone with, especially with how unrealistic he feels.

I was looking forward to seeing this, and I did get enjoyment out of it, but unlike the first one this isn't something I can imagine sticking in my mind as it felt more like a collection of ideas rather than the solidly planned layout that came before. The usual old style found footage tropes such as shaky camera action and bouts of darkness pop up on many occasions, though there are some great moments as well such as objects and people appearing and disappearing from shot in a single take. This is creepy at times with some decent moments of horror, but only really in the middle part with the first and last thirds not as effective. I guess when it comes down to it I was a bit disappointed, I had high hopes and they were squashed, this isn't terrible by any means it just is a poor imitation of a much better film.

Posted by Daniel Simmonds at 14:58