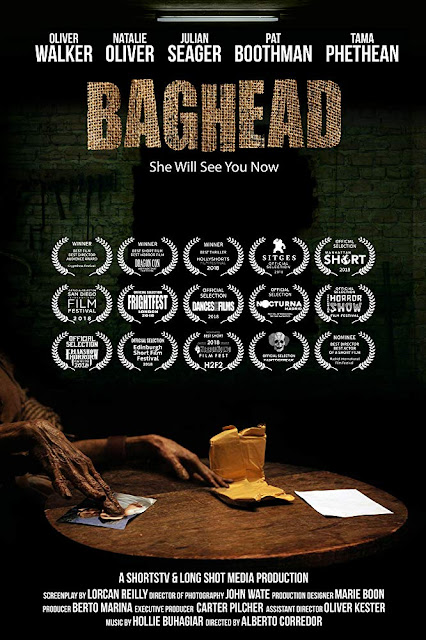 Baghead is an award winning short fifteen minute horror that was directed by Alberto Corredor in his directorial debut and written by Lorcan Reilly. Initially starting off as pure horror this soon changes into something a little bit different, and something which has a vein of black humour running throughout.

A grieving man named Kevin (Oliver Walker) arrives at a grimy pub run by a gruff barkeeper (Julian Seager) one dark night. With the correct queries and the appropriate items he is led down into the dank cellar for a meeting with the person known only as 'baghead'.

It really has been a good year for short horror films as Baghead is yet another great little gem. There were two main parts to this, the initial section was creepy and I was anticipating to be scared. This was helped by great atmosphere, and the great dilapidated look of the pub and the cellar. It then changes into something that was more fantastical using an idea I hadn't seen since back in the video game Monkey Island II: Le Chuck's Revenge. I don't really want to ruin it but I will say there was a good twisting of characters intentions, while the concept of only having 'two minutes' added a lot of speed to this. Seager was fantastic and by far the best thing about this, I loved his off camera comments as dialogue between two people on camera went on, he was funny without being a distraction.

The plot was interesting as was the way it was framed, the prologue for instance had a man strapped to a chair begging and apologising to a partially seen man. When in the story itself we see this same chair it led to all sorts of questions. In a wrap around way this then gets addressed at the end, and I felt it was neat to have the story continue into the credits with extra dialogue playing out over them. I guess if there was any complaints it would be that it wasn't what it initially seemed to be, but that is also a plus as well as it defies expectations with a nice little perfectly paced story about coping with loss. Once Baghead finishes its festival run it will be available online.

Thank you so much for the kind comments. I love Baghead and my character and particularly like the monkey island references which hadn't occurred to me before!
We are playing at Edinburgh film festival, Atlanta and London in the next two weeks.
Please give me a follow on social media Twitter = @julianseager
www.facebook.com/julianseageractor

Thanks for the comment, kind of embarrassing but after 9 years I have just realised I have been getting comments on my blog posts!

It seems that the internet's love of nostalgia extends beyond just pop culture, with the Slender Man and copy paste ghost stories like Teresa Fidalgo getting a second wind this year, but how did the dead girl tale start and is there a shred of truth to it?

I checked that out, was pretty interesting :)