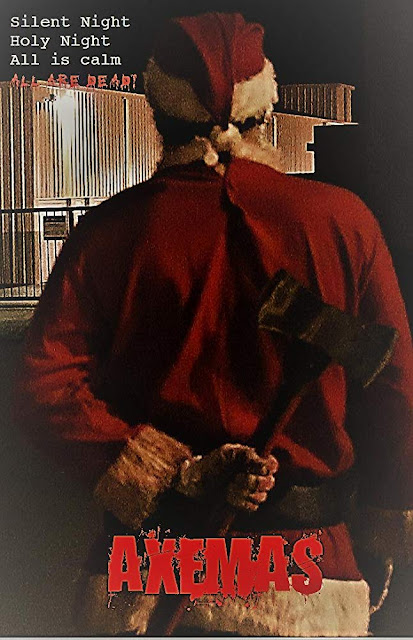 Axemas is a short 25 minute slasher that takes place entirely in a storage facility, it is actually the second horror I have seen set in such a place, Storage 24 being the other one. With a reduced run time to a feature length slasher this cuts down to the chase and is all the better for it. While I had a couple of issues with aspects of this it was fun with some nice kills and a decent enough plot.

David (Dillon Weishuhn) works at a storage facility and in the run up to Christmas has decided to hold an illicit party with his girlfriend Sarah (Ashley Campbell) and their friends at the place. The entry shutter automatically closes from 11pm till morning so they have the whole night to do what they want there. Unfortunately for them they are not alone, an axe wielding maniac wearing a Santa costume is also locked in with them, and he has violence on his mind...

This was quite fun with the trimmed down time really helping this get to the action. The characters are all forgettable with none of them really getting any screen time to show what sort of characters they have. Despite that there are twists along the way, and the emergence of the traditional 'final girl'. The killer himself (John E Seymore) goes down the well trodden route of being a wise cracking killer and I think his jokes may even make Freddy Krueger wince! I'm a fan of bad puns but the ones here are almost too much, though they still got a chuckle along with eye rolling. I can't really give many away as it is a bit of a spoiler but as an example "Welcome to the North Pole!" he says at one point after spearing a character with a metal pole. The jokes are terrible but kind of fun. The actors are all fine but occasionally their lines came out a bit wooden, or without much confidence to them. Campbell was the best here but in terms of her character it was all over the place, one moment traumatised and screaming, the next back to empowerment and coldness.

The location is a series of steel lined corridors so was hard to give much identity to, but this allowed some nice chase scenes, and one part involving a staircase had a cool split screen, showing the killer on one side heading towards a victim, and the other side showing the victim with the killer in the distance. This was a really nice effect and I wish more of this style of filmmaking had been done. The special effects work in that trashy cheap slasher way, plenty of blood and some fun moments. I will say that the effect of a bone sticking out of someone's leg looked great!

With a nice synth soundtrack, some fun and inventive kills and those terrible puns Axemas was a short that may have been a bit rough around the edges but was a treat to watch. Crazily enough there is actually a sequel that came out this year: Axemas 2: Blood Slay that features the same storage facility, and the same final girl but set one year later. Axemas can be purchased here (USA), here (UK) or here for the rest of the world.