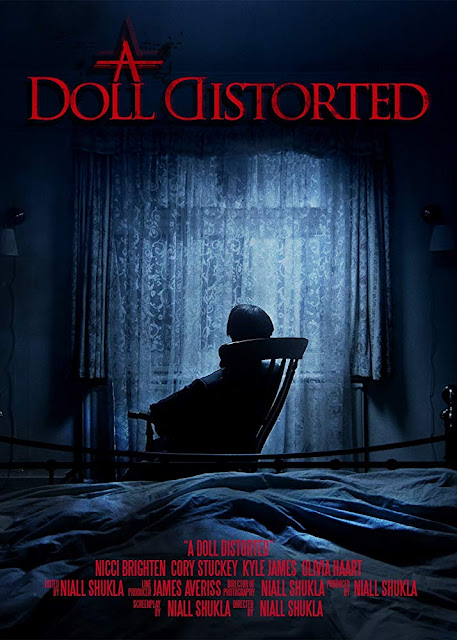 A Doll Distorted is a short award winning British horror film by Niall Shukla who was the director, writer, producer, editor, sound designer, set designer, VFX artist and cinematographer. In fact the short was created entirely with a two man crew, the other being James Averiss who was the lighting and camera assistant. This becomes very arthouse in style at times and it was here that it nearly lost me, however an effective twist coupled with some nightmarish images really assisted with my enjoyment.

Jane (Nicci Brighten) is a lonely woman who suffers from haphephobia (fear of touch). For years she has been unable to get over the split that seemingly occurred between her and Michael; the man she loved deep in the past. To cope with this obsession she purchases a synthetic love doll and dresses it up to look like him, but this decision is only the start of her real troubles...

Over fifteen and a half minutes we get to see the sad and isolated world of Jane with the camera never leaving her apartment, and it always being night time outside. Starting with a voice over, light is shed on the lead up to the present time where she purchases the doll. This is a really messed up short! That is a good thing of course and I particularly liked where the story went to, especially when clues are referenced throughout but not given context until the realisation hits, such as something small fluttering on a window, strange stains on her pillow, bruises on her back, and the pills that Jane is constantly seen to be taking. As mentioned this is quite arthouse in style and after the initial narration there is not any dialogue at all, due to the short consisting of Jane and her life sized man doll.

At times this seemed like a series of nightmares as horror happens only for it to then seem to have settled down again. When I saw the Annabelle series of films I was always disappointed that the doll itself wasn't shown to move, luckily with A Doll Distorted that is the case and there are a series of wonderfully crafted sequences that both build up tension and suspense and bring on the horror. One particular scene had Jane standing by a window while a breeze blew mirrors on either side of the shot, so that when the mirrors were resting you could see the doll on a rocking chair, then the wind would blow the mirrors off this scene to have then fall back and show a slightly different sight. This was wonderfully done and in general there is a lot of use of mirrors, such as a great scene with a shattered mirror on a wardrobe as well as reflections in windows.

I'm never a fan of footage being sped up and so one sequence involving Jane on the floor crawling backwards seemed rushed in how it played out. There were also sex scenes between Jane and her doll that kept popping up throughout which I found plain weird and off putting...until the later context was given at least. This gets really quite arthouse at times with discordant images out of context but Shukla is also able to craft together some wonderfully paced scenes, there were a couple here that were really quite clever in how they panned out. The make-up effects were also quite good, as were the VFX used on occasion.

A Doll Distorted is a film that I appreciated but didn't love for much of the run time, I can't state how much a difference the later part of the film made in making me get tipped over the edge into thinking this was pretty great as a piece of horror. This is a dark messed up tale of madness and obsession that isn't afraid to stay focused on the bleak side. For more information check out the Facebook page and Instagram page.