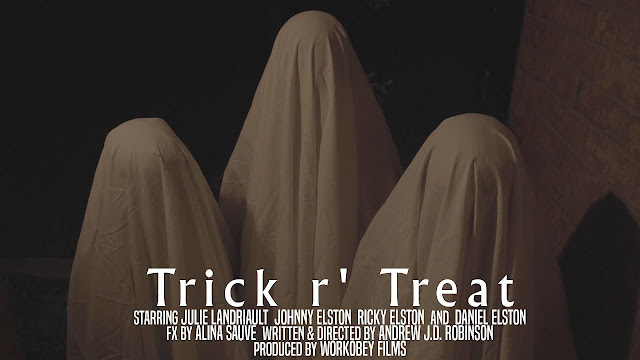 Trick r' Treat (no not that one) is the latest short horror film from prolific director/writer Andrew J.D Robinson that I have seen. Coming off the beauty of The Becky Carmichael Fan Club I was certain this would continue the improvements he constantly shows. This short was built around a few stipulations due to the fact it was created for the Jakob Owens Short Horror Film Contest. The rules for this stated the film had to be two minutes or less, feature no dialogue, have a maximum of 15 shots, and feature no more than five actors. With Candle Cove Robinson already proved he is able to make an effective horror in a short amount of time and so was interested to see where this one would go.

A woman (Julie Landriault) returns to her car on Halloween to discover some flyers about missing children on her windshield. Later that day she gets a knock at the door and thinking it is trick or treaters goes to greet them...

The music choices used here I enjoyed, mainly as a sample for Night of the Living Dead was used, but I also liked the jolly song playing over the Halloween inspired end credits. it always impresses me how anyone can make anything effective with such a short space to play with but again Robinson is on form with 90 seconds that tells a concise story. The initial section filmed in black and white is basically used to set up the later horror element and felt slightly separate to the rest of this. When the house part comes it was a bit creepy, and manages to bring noise into the horror also with a buzzing noise that increasingly gets louder that plays out over the image. To be honest first watching this I honestly thought the buzzing noise was my damn tinnitus playing up as it sounds very similar to what I have constantly in my head. Regardless of that this was tense and suspenseful and leaves you wondering just what would have happened next.

Trick r' Treat was a fun little Halloween themed short that seemed far longer than its run time would suggest. It manages to create not only a feeling of unease by the time the credits roll but does so even with limitations placed against it. As always I look forward to what comes next from the mind of Robinson. Check out the short for yourself below.

Glad you liked it :)