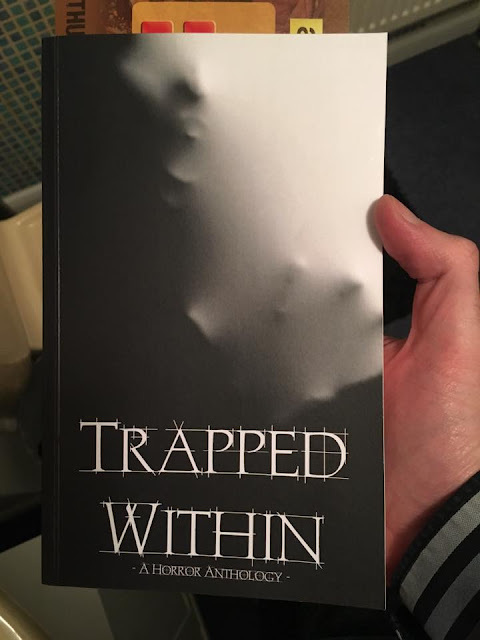 So I definitely do not read as often as I used to as I started reading horror anthology Trapped Within on 22nd September 2017 and only finished it last week! I blame video games to be honest...no, seriously. So the sign of a good anthology is the topic that ties the stories all together and the concept is as the title suggests being trapped. I will start off by saying though that the most horrific story out of all these isn't even a story, it is instead the introduction by Debbie Bradshaw who describes the real life event that was her father having a stroke. I didn't really know much about strokes and so it was heartbreaking to read about how much this affected both this man and those who love him. All proceeds of Trapped Within go towards the Stroke Association so even if I were to give this a bad review (spoiler; I don't) I would still implore people to buy the book.

This anthology features twenty four different short horror stories that as stated go with the idea of being trapped. Some of the authors of these I had heard of (such as James Newman - The Wicked, Duncan P. Bradshaw - Class Three, and Adam Millard - Larry) but the majority I had not read any of their stuff before, as I said I really do not read as much as I should. Looking at the mess of notes I made over the course of a year I can't see that there was any one story that I didn't like in one way or another but there were certainly ones that really stood out for me. I was not too impressed with the anthology to begin with and I think that was more how the stories were set out. The first three; That Damn Slit (Newman), With Blackest Moss (Christine Morgan) and ChaGrin (Jonathan Butcher) were each good in their own right, but all used an abusive family member as the idea of being trapped, I started to fear that all twenty four would follow the similar idea rather than branching out and trying different things. It is when some variation starts that Trapped Within really comes to life.

George (Daryl Duncan) was the first story that really stood out, how can a story about a man turned into a toad by his evil wife possibly not? This was then followed by the chilling The Lonely Of The Scharnhorst (Ken Peterson) which was the first to take the idea out of the house with this set deep underwater in a potentially haunted shipwreck. Rather than just make this review a list of all the stories I will split them up into ones that were abstract, ones that I enjoyed the most, and the rest. Killing Dog And Tiger (Garratt Cook) was odd, seemed to tackled PTSD. An even odder one was The Mirror And The Chair (Craig Saunders) that was as confusing as it was short. I had been looking forward to Bradshaw's story as it would be the first time I had read something of his that wasn't comedic. Q&A certainly isn't comedic, it's the stream of consciousness of a man who believes he is trapped in his own body. It was interesting in how it was written, and also quite grim in the violence that is described here! It reminded me a bit of the freak show segment from his book Class Four: Those Who Survive in terms of the descriptions of body horror. He And She In Heaven And Hell (Andrew Freudenberg) tells the crazy story of an angel having a gigantic fight with a demon, it felt out of place only due to how wild and action packed it was, not due to it being a dud.

Onto my favourites you have All In The Eyes (Mark Cassell) which is a really weird story about a young boy trapped in the gaze of his sinister Grandmother. Then you have the excellent Bad John (Adam Howe) which may just be the best story here. In this one a prostitute finds herself at the mercy of a sick serial killer; a revenge story at its best with added humour. Another great one was Scarab (David Owain Hughes) that felt like a trashy eighties Italian zombie flick transported onto paper, though of course it had zombies in it so I was bound to love that one. In it a jewellery store robbery goes very wrong when an ancient curse is accidentally activated. Other notable ones include My Own Worst Enemy (L. de Clifford) about a man diagnosed with schizophrenia whose body gets possessed by the voice in his head. Also Love, Eat, Prey (Ash Hartwell) which is about a werewolf stood out. Werewolves are my least favourite sort of horror creation but here there was an exciting Straw Dogs style situation going on that was a fun read. Rat-A-Tat (Kayleigh Marie Edwards) was very interesting, I loved the idea behind this and the crazy revelations contained here that flip around the readers expectations to a high degree. I could really see that one working well as a film. Finally (in both senses as this was the last story) was the sad Paper Thin Roses of Maybe (Damien Angelica Walters - Cry Your Way Home) that takes a bizarre idea of a small town slowly but inexorably transforming into one giant photo and makes it work.

Onto the rest of the book now with a bunch of stories that dealt with various horror situations. Ghost Story (Andrew Lennon) is about seeing ghosts of people trapped in limbo and ends on a sad note. The Darkling (J.R Park) is about a forbidden room in an old house, it felt quite traditional. As was the cop drama that was Bury All Your Secrets In My Skin (Alice J.Black) and, Just Eventide (Dan Weatherer) which was about forbidden woods in an old town. An Eye For An Eye (Dawn Cano) was about an animal lover turning the tables on animal abusers, while Habeas Corpus (Kitty Kane) takes the crown for most violent story. This was about a captured child killer and featured lots of disturbing scenes of police investigating his property. Jimenken (Millard) is a cautionary tale about the consequences of driving while under the influence and was the best written story in the whole book. That just leaves Oil Is Thicker Than Blood (Benedict J. Jones) that takes place on a large ship that has gone somewhere it really shouldn't have been able to go, and this uses the neat plot device of having a character in the present telling a story about a past event.

Trapped Within like all anthologies works due to the fact there is always something a little bit different around the corner. This was at its best when the stories branch out from the singular setting of a house and abuse. There were some fantastic shorts here and even the ones I didn't enjoy as much were still well written and good enough in their own ways. This is a book where all proceeds go to a deserving charity so even if it doesn't sound like your thing but you do like horror then check it out.