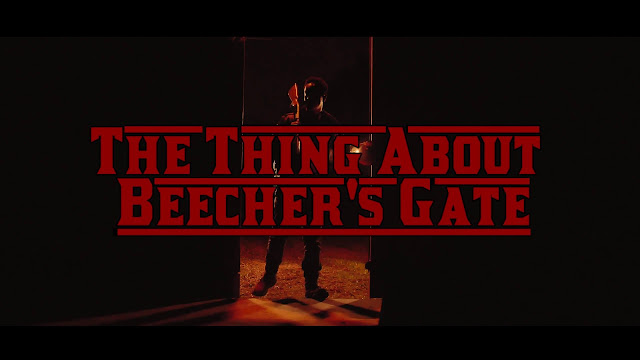 Earlier this year in June I watched Jeremy Herbert's fantastic short film The Childish Thing and so when he contacted me about his new short The Thing About Beecher's Gate I knew I would be in for a treat, especially seeing as how it again stars Morgan McLeod (who came up with the story along with Herbert). What these films do very well is make something that on paper sounds ridiculous and to be truthful pretty lame actually become something that is unsettling and creepy. Now the trailer itself avoids showing just what the horror is here and so I feel it would ruin too much of the surprise to actually mention much of what is going on here except in general terms.

Deputy Eli Stoker (McLeod) has recently transferred to the quiet town of Beecher's Gate and finds himself with an odd assignment. The Sheriff (Chris Cipa) has told Eli he must go to a remote barn out in the middle of dense woodland and spend the night there. To help with his mystery task he is provided with a flashlight and a shotgun, but no actual explanation of what he is to do there other than it being a tradition for new members to carry out. Eli figures it is some sort of elaborate hazing ritual and expects he will be pranked, however deep into the night he discovers himself caught up in something really quite horrifying and must do what he can to survive the night...

I expected I would like this and I did in fact like this. Due to the amount of films I have for review at the moment I watched this on my phone on my lunch break at work. It just goes to show what a great job Herbert did as I get genuine chills down my spine at times even in that most unsuited location. The director has stated that special care went into every aspect of this short to convey the message he wanted to impart, I admit I don't really know what that message was but I had a good time regardless. On the surface this is a survival film, the antagonists could be replaced with zombies, they could be replaced with gang members (an inspiration for this was John Carpenter's classic Assault on Precinct 13) and it would work. The biggest horror just comes from the most unlikeliest of choices, there is no explanation for what is going on or why it is going on, it is just tradition. This could be a commentary on traditions in general, especially small town ones where to outsiders they appear confusing and plain bizarre. I also feel it works as an analogy for rule following and thinking outside the box. Eli is provided with very basic rules to follow and by having the confidence to use his initiative proves that he can be a valuable team player who will be an asset to Beecher's Gate.

This is mostly a completely bloodless affair but surprises come from some unexpected places with the use of chains bringing memories of Hellraiser to mind. There are some really good shots here, from a character being dragged away into darkness to a shot of a character in focus in the foreground as an out of focus background thing sweeps towards him. This is all supplemented by a really effective score that sounded at times like the backdrop to an alien landscape, reflecting well on the bizarre situation. There are a couple of characters here but for me it was McLeod who stood head and shoulders above the other two, though Cipa was perfectly suited as the Sheriff.

If I had any complaints I guess it would be that from a pacing perspective it follows a similar format to The Childish Thing, and like that one I found the ending to be a little underwhelming, though that ambiguity helped maintain the horror aspect better than any explanation would have done. I loved The Thing About Beecher's Gate, short films can be some of the most entertaining when it comes to horror, especially when they are made this well.