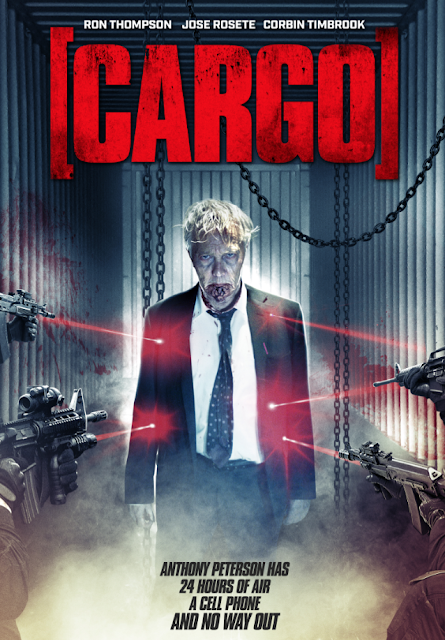 I first mentioned James Dylan's [Cargo] back in September of last year when a trailer dropped for it and now I have had the pleasure of watching it. In some ways this is similar to Phone Booth, both feature a protagonist of questionable character who finds themselves restricted to the one location at the mercy of an antagonist on the other end of a phone. This one impressed me more though with just how it is all set out.

Anthony Peterson (Ron Thompson) is a businessman who wakes up to find himself locked inside a dark cargo container that is empty aside from a mobile phone. He soon gets a call from a mystery man who informs him that if he doesn't raise ten million dollars in ransom money within 24 hours him and his wife will be murdered. With just the mobile phone he must find a way to get this money using whatever means he can. 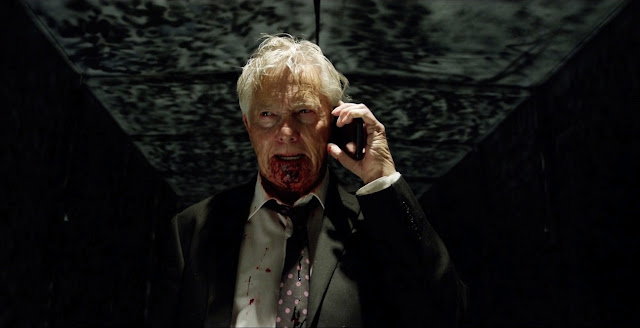 I said back in my preview of this that I wondered how interest could be sustained for a feature length run time when it literally is just one man in a featureless dark location. However not only was my interest sustained but on some parts I managed to be on the edge of my seat with a huge grin on my face. That this manages to get such emotion out of the viewer is pretty impressive, and is done by a variety of means. Rather than have Peterson speaking to a phone and not being able to hear the person he is talking to you instead get what feels like a radio drama play out. Not only can you hear the voices on the other end of the line but you also hear sound effects that do not sound natural but do add a lot of immersion. This would work equally as well as a play or a straight up radio drama due to the generic sound effects that include such things as punches, gun fire, dogs barking, and glass smashing.

[Cargo] certainly does not go down a realistic path both with reference to the over the top sound as well as larger than life characters. It also is very fast paced with things such as a car journey, or going into someone's house done quickly, this is another aspect that felt there to speed things along as while it is set in a dark shipping container it didn't feel like any time had passed when all this occurs. There is not a single character either seen or heard who came across as a normal person, the star of course being Peterson himself who couldn't be a more evil person if he tried, comically evil in fact, everything from having arranged for innocent people to be brutally murdered in the past to having an attack dog at his home named Satan (as well as his door code of '666'). Thompson puts in a great exaggerated performance that is so demonically self centred that you can't really hate him, in fact by films end I was totally on his side, his victories my victories as I sat there with a gleeful grin on my face. 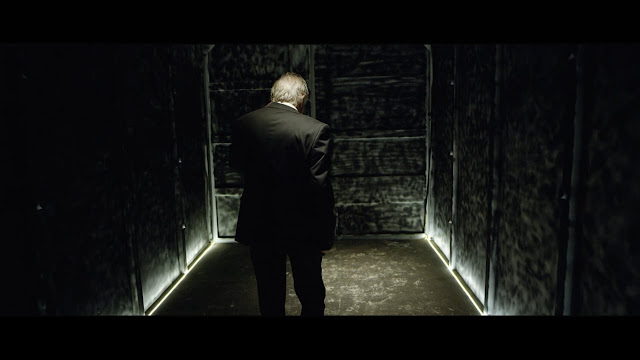 There is a lot of dark humour here, perhaps my favourite character being Peterson's long suffering personal assistant Tom (Mark Wood) who initially seems normal enough, yet by the end of the movie has (all via the unseen phone drama) had to deal with an overdosed hooker, robbed a store, been involved in car chases, admitted to be on an insane cocktail of drugs, slid down a banister and quite possibly killed a dog. Wood's voice was perfect for this guy and his script was always full of surprises that made his every audio appearance a joy to listen to. On the surface this seemed like it was going to be serious yet I had so much pleasure with the dialogue and events that happen throughout, like Crank but taking place from the other end of a phone to that character. There were some odd plot decisions at times though, the ending for instance: while I did enjoy it I felt it seemed a bit out of character and found it hard to understand the motivations for what happens. Also I felt the hallucination scenes really didn't work that well and felt a bit out of place.

The location is bland but Thompson is beautifully lit throughout, his relentless pacing gives him more personality than if he had just been lying or sitting the whole film. Some of the special effects did leave a little to be desired, it is inferred the container is wired up to electricity, so every time Peterson is electrocuted it never looks anything but silly. Then a scene that descends into torture porn takes place with the back to the camera so that it is hard to feel any sort of peril for the man during that particular part. More on form is the fantastic soundtrack that is full of synth and remained consistently great throughout. Of note also was the dynamic camera work that sweeped and swooped around the container in time with the events Peterson was listening to, this added a lot to the heard events, such as swinging past the character when a car is being driven by someone he is talking to, then at one point the camera literally somersaults a few times to simulate a car crash that is occurring. Some really interesting use of camera that few films I know of have used (The Evil Dead is one such film that comes to mind).

With [Cargo] I was expecting a serious and bleak horror, instead I got something that was joyously silly at its core, a plot that felt like it was ripped from a video game, and a fun performance by the main lead in what had to be a challenging role. For something that takes place solely in a dark shipping container this sure was riveting stuff! I also have the novelisation to read and so a few books down the line I will be checking that out.

Posted by Daniel Simmonds at 15:35