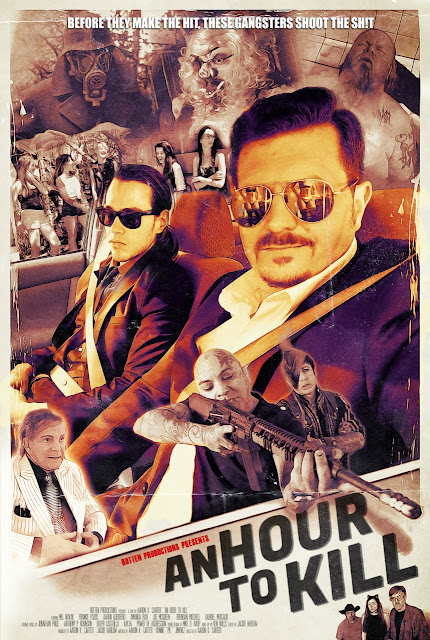 Another day and another anthology, this time the gangster themed An Hour to Kill that was directed and co-written by Aaron K. Carter (Dead Kansas). I'm a fan of anthologies so another one isn't bad news at all. While this one had its problems I still got some enjoyment out of this due to some spirited performances.

Taking place in Los Angeles two hitmen: seasoned veteran Gio (Aaron Guerrero) and rookie Frankie (Frankie Pozos) have been sent out on a mission by their boss Mr. Kinski (Mel Novak - Bruce Lee's Game of Death, An Eye for An Eye). Before they can start though they have an hour to kill, so to while away the time the duo tell each other stories about horrific events that are purported to have taken place in the area. 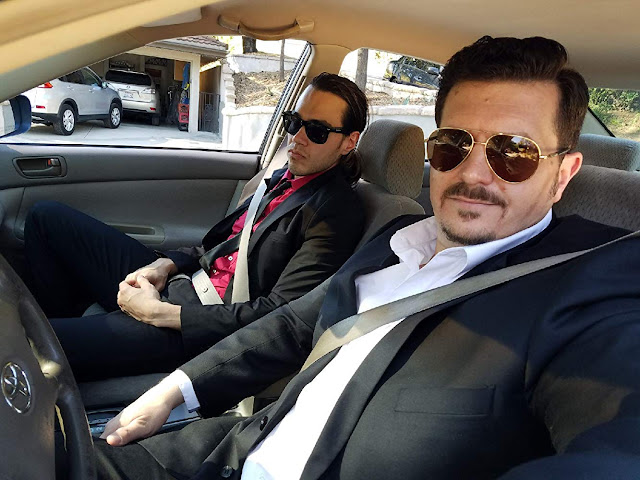 There are four stories here including the wrap around one with each one being different enough to stand out. The main story An Hour to Kill is not horror related in the slightest (it had a feeling of Reservoir Dogs), yet the ones the characters in this tell are. This created a weird divide between genres but with such casting for Gio and Frankie I didn't mind. Frankie in particular shined due to Pozos entertaining turn as the eager newbie who constantly likens himself to a snake. There was good chemistry between these two and their wrap-around plot actually went places with a decent finale and a nice little cast of characters such as the mohawk wearing bartender Vince (Vince Kelvin) and the crazy tattooed gangster Arash (Arash Dibazer).

The first story was Valkyrie's Bunker which is about a bunch of valley girls in the 1980's who following up rumours of weed growing in the wild, head to a remote bunker in the hills that is said to have been a secret Nazi base during World War II. The derelict buildings and isolated surroundings gave this some atmosphere in what nearly becomes a slasher. I was enjoying this one right up until it abruptly ended, a similar problem that it shared with Ghost Stories in that there is a decent idea but is then just dropped. It features mostly the girls just walking around exploring, with the deaths taking place mostly off screen. It was nice while it lasted.
The second story as the title suggests is much more comedic. Assacre is about a couple of food eating champion wannabes who trick a man into eating the worlds hottest, and deadliest chilli. I didn't really like this one as it was pretty gross and pointless and featured some of the less good acting in the anthology. I was glad when this one was over with as it just didn't appeal. 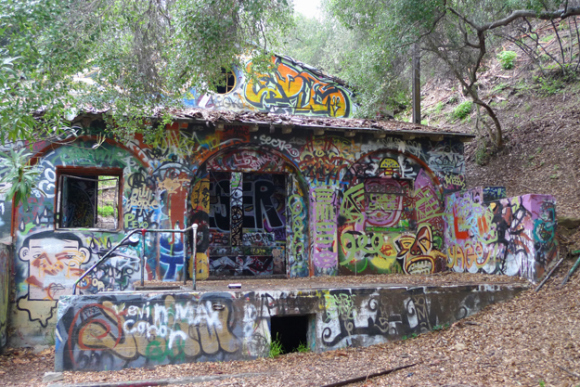 Thankfully the third and final short is somewhat of a return to form with Hog Hunters that follows a bowling team who take their newest member on an initiation outing to a remote farm. They hope for a night of sleazy fun but instead find themselves up against abominations of nature. This one was pretty silly but enjoyable. Both Valkyrie's Bunker and Hog Hunters had a really trashy exploitation/grindhouse feeling to them that worked with the indie budget. In general the special effects were quite basic but they were functional, same for the make-up. On the subject of exploitation this ends with a prolonged pole dancing scene that was full of really awful pig based puns, a scene that should have probably been left on the cutting room floor even if it did bring characters from the various segments together.

Occasionally some of the acting was a bit iffy but overall there were a decent bunch here who went well with each other. While I didn't like the middle story there others were all good enough even if some were less well developed than others. The two main characters were great choices as both were likable  and overall this worked pretty well. An Hour to Kill was released early October on Amazon Video and can be purchased here (USA) and here (UK). For more information check the Instagram account or the Facebook page.