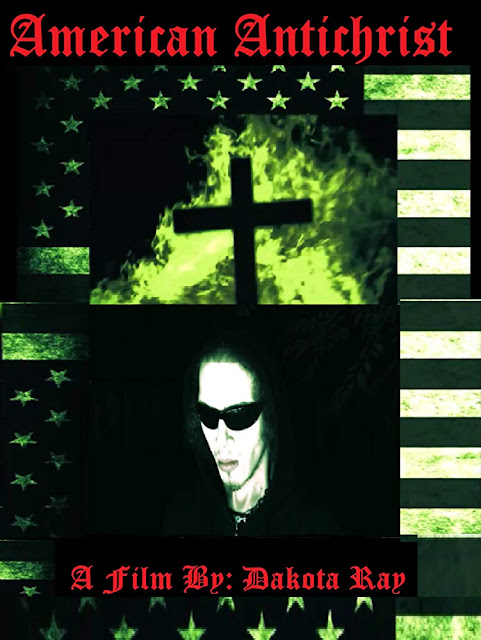 American Antichrist is the latest exploitation film from director Dakota Ray (formally Dakota Bailey) whose previous films include among them The Acid Sorcerer and The Rise and Fall of an American Scumbag. As always this follows the formula Dakota excels at: a series of interconnected stories that take place in a twisted version of America.

This time around there are three main stories going on, the first which takes place over four parts has a serial killer (Ray) dying from a heroin overdose, only to be brought back to life as the Antichrist. The second story Revelations - The Sickness of Immorality has drug addict Crystal (Meg Lacie Brown) on the hunt for her next fix only to find herself in some serious trouble. The last story The Beauty of Sin follows a religious serial killer (J.B - American Scumbags, My Master Satan: 3 Tales of Drug Fueled Violence) who preys on the homeless. I remember the early films of Ray and how they had good ideas to them but suffered from bad sound quality. Here it is easy to see how far he has come as sound was not an issue at all. American Antichrist is around fifty minutes in length with a fair bit of that focussed on singular characters. It is only really the section with Crystal that has characters interacting with each other, I don't know if it was due to that and the more simple story going on but I enjoyed this the best of all. It encapsulated everything that these films do well; grimy lowlifes, heavy drug use, and the ever present threat of danger. This cautionary tale was enjoyable though the character of Sid (Damien Rimmon) had criminally short screen time for what was a great new addition.

Most the film follows the newly appointed Antichrist and this is where the film becomes the most Ray traditional with much abuse of animals (simulated not real) and desecration of religious icons and imagery, such as the ten commandments being set on fire, crucifixes being destroyed and vomited on, but not so much random violence as previous films. This is the first one I have seen that has a definite supernatural element to it, rather than as an effect of drug use, but I would say the serial killers antics don't amount to much more than wandering around on his own. Things such as the pre recorded notes on his mobile and the fantastic trippy finale make this memorable. The actual plot for these segments is very limited but it was interesting just to see this character exist in this bizarre miasma that was quite abstract. Brought back to the new film also are character monologues which work especially well here seeing as there is very little interaction between people. 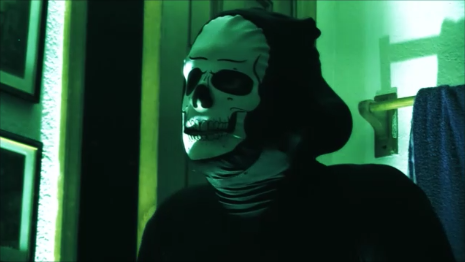 Most the film has a green filter to it with the occasional blue filter used. This gives everything a dark washed out seedy feel to it that works well with the subject matter covered. Here it is an exploration into the nature of evil with Ray stating that evil can take many forms, whether it be religion or drugs. While there were some concessions to traditional storytelling with Crystal and the homeless killer's plots American Antichrist shows that even with characters just existing in the bleak world Ray has created it can be an engaging watch.

I liked American Antichrist, it was cool to see how Ray is improving as a director and editor while the smaller cast meant there wasn't a bad actor amongst them. To be truthful I have become quite a fan of his work over the years and this does enough here to stretch outside the more formulaic style that has sometimes been a complaint of mine with some of his past movies. There is currently a presale campaign running on Indiegogo for this so check that out (here) if you want to find out more.