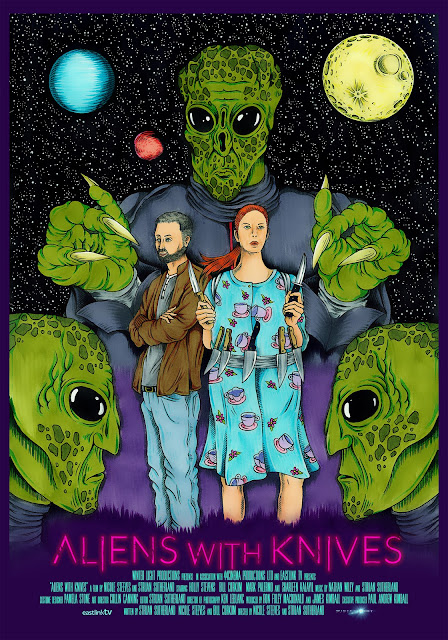 Aliens with Knives (co-directed by Nicole Steeves and Struan Sutherland) is a Canadian comedy sci-fi horror that features some very weird surreal humour rather than the more traditional silliness associated with comedy films. This more random style always works for me and while I never found this to be anything much more than inoffensive it did have moments of genius peppered throughout.

Dan (Bill Corkum who also co-wrote this along with Steeves and Sutherland) and his heavily pregnant wife Neila (Holly Stevens) have gone to live in the countryside until the baby is born, on the advice of Neila's doctor (Sharleen Kalayil). Before too long they find their house surrounded by alien creatures and so along with local oddball Scagnetti (Mark Palermo) must try and survive the siege until help arrives. 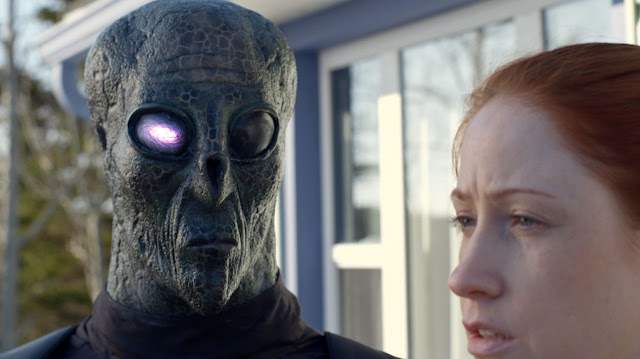 I found everything about Aliens with Knives to be low key. It was low on thrills, low on character development for the most part, and low on plot but rather than take this as a complaint it actually made this really easy to watch. The violence was kept to a minimum, there's no swearing, and there isn't really any horror to speak off but made this quite peaceful to have on. Aside from the many aliens there are only a handful of characters the best three being Neila, Dan and Scagnetti. The couple never seemed to have any chemistry between them, this seemed purposeful as many scenes are set up to show their division and does set up later plot twists. Both actors in the couple are great at delivering their stupid lines with the straightest of faces. Palermo is also great as the local oddball, he had such a weird role, helped by the facial expressions and mannerisms he brought to it.

The humour is so strange that at times it really delighted with how completely bizarre it got. At one point there is a montage of Neila nursing a slightly injured Scagnetti back to health which is then followed by Dan walking in to find the guy breast feeding off her. This is then followed by a sensually shot montage of Scagnetti and Neila with Palermo putting the most demonically pervy smile on his face at one point, while this is all happening we get a montage of an anguished Dan outside the house screaming and shouting at the heavens. He then returns to the house and this whole thing is never referenced again, so totally strange but it just worked. For the most part it is the crazy stories that brought the humour home for me, such as Dan's tragic story of how he came to quit the police force (a really lame reason that is played super seriously), as well as two dreams explained by the characters. One that had Neila describing having a child who was so sticky that everything that exists stuck to him, and one that had Dan describing him and his wife living in a small box and cutting pieces off each other to make a child. These were all so random and surreal in a way that reminded me of the work of Chris Morris. 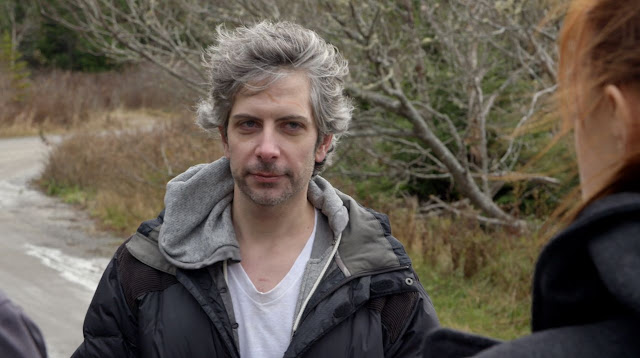 The horror aspect of Aliens with Knives comes from the titular aliens themselves, I liked the scene that shows how they came to pick knives as their weapons of choice. There is never any character to most of these aliens who are content to just stand around doing nothing, or pathetically attempt to attack the protagonists. Like the aliens in M.Night Shyamalan's Signs they have a fatal weakness, but here it is even more fatal in that being touched is instance death for them. This leads up to a few fun montages of them getting defeated in various ways which got quite ridiculous. Their great weakness made it difficult to ever fear for our heroes safety, though these characters never get cocky and so things are kept feeling tense. The effects are mainly functional and kept to a minimum with some CGI used that doesn't look amazing but fits the style of this low-fi sci-fi. The plot wasn't the most surprising and there wasn't really any effort to hide what exactly was going on but it is treated with the appropriate level of absurdity, and truth be told a few little twists happened here and there that I really didn't expect (one major one springs to mind actually). All the way up to the finale things stay strange and surreal with seriousness never over taking things (even as the revealed antagonist tries to explain their plan our protagonist constantly interrupts by yawning loudly).

Aliens with Knives had a style of humour that I don't often see in a lot of films and so it worked by being something different. For me though while I found this to be an easy watch it wasn't one where I really found myself invested in the goings on too much. By the time the end credits rolled I didn't hold any grudges at what I had seen, but it didn't do much to really truly stand out in my memory. It certainly isn't a bad film and it has some good performances by the main cast, some decent moments of comedy and I respect how strictly it stuck to its oddball intentions.