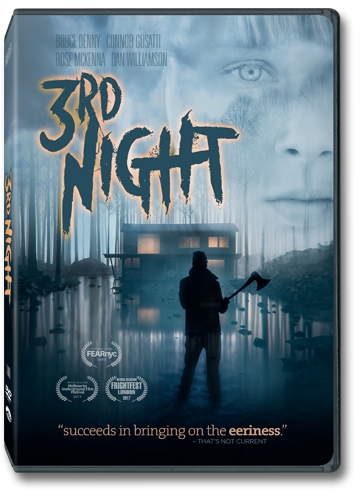 3rd Night is an Australian horror that is the feature length directorial debut of Adam Graveley who also wrote and edited this. While this was nicely made with some great production to it I couldn't help but feel it wasted a bit too much of its run time trying to purport a red herring as fact, rather than focus on the horror at hand.

Meagan (Jesse McGinn) and her husband Jonathan (Robert Hartburn) have recently moved into a farmhouse deep in the Australian countryside in order to get away from the bustle of city living. Right away things start to seem amiss, with their cat vanishing on their first night, and then bizarre notes start appearing all over the large property. Is it as Jonathan suspects just bored kids trying to have fun, or is something far more sinister at work? 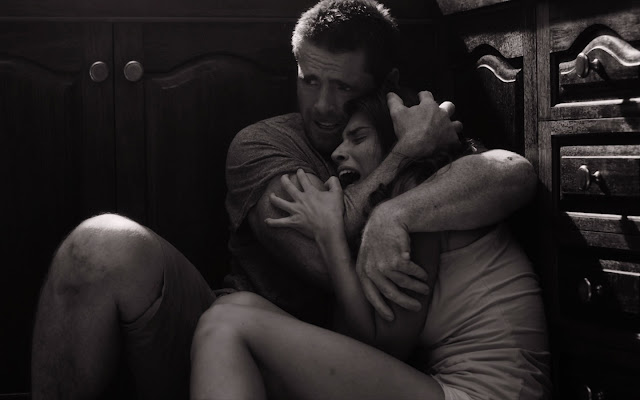 Aspects of 3rd Night work very well, it starts off strongly with a thrilling prologue that is seemingly unrelated to the main story and sets up the tone of the film well. Sadly after this the movie becomes a real slow burner with nothing really of note happening until the third act. As the title would suggest this takes place over three days with the horror occuring at night time. So concerned is this with setting up a twist later on that there is little substance. We come to know our protagonists a little bit, we also get scenes that revolve around a bizarre student/mentor relationship that outback poachers Cambo (Bruce Denny) and his teenage protege Rex (Connor Gosatti) have. While they didn't seem to have good intentions I never found these that intimidating. I expected terror to strike each time night came but it wasn't to be. Night one nothing really happens, the second night nothing that exciting really happens again. It is night three where the film finally gets going, but with fifteen minutes left out of the seventy two minute film it felt a little too late.

This third act though was the best part of 3rd Night, it sets up some unsettling imagery and gives a good bleak tone that slightly brought to mind Wolf Creek. It was also clever in how it shed new light on previous scenes featuring certain characters. While the design of the antagonist was great I felt holding it back from being seen until right near the end was a bad mistake. I know less is usually more in conjuring terror but here it led to a bit of boredom to only see the gloved hands prior to the finale. This isn't to dismiss the plot itself as I did really like what eventually this turned into, it is just a shame it took so long, and as fun as the idea was it did open itself up to some gaps of logic. 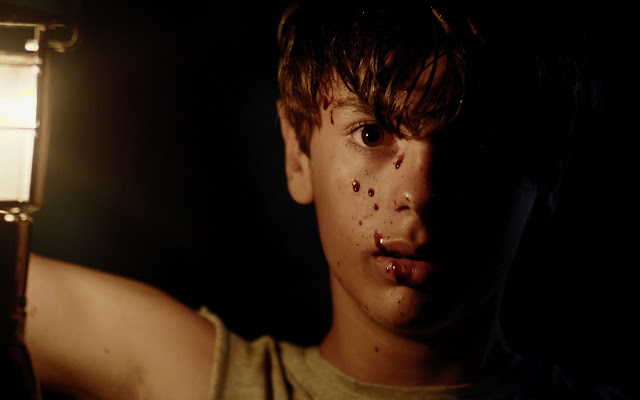 The effects when they occur are sparse but the makeup for wounds looks juicy enough. As for the acting it was all fine, I never particularly cared for anyone here, except maybe Meagan, though her constant pining for her lost cat, coupled with a pathetic call to the local uncaring police didn't win her any favours. Jonathan's aggressive denial that anything untoward was going on also grated a bit. With both characters not really that bothered about the strange goings on it was hard to feel any tension for their plights. On the plus side the cinematography was used to good enough effect to give an impression of isolation for the duo and there were some nice use of motion blur and entertaining end credits that lent this a more solid look and feel to it.

While 3rd Night on a technical level was well made with some good Black Christmas style voyeurism going on I just wish the pacing had been better, or at least that the first two thirds were not such a slow uneventful burn. While this did get good towards the end the lead up was almost dull which was a real shame. 3rd Night was released on DVD on October 9th in America by Monarch Home Entertainment and can be purchased here. Check out the trailer below.