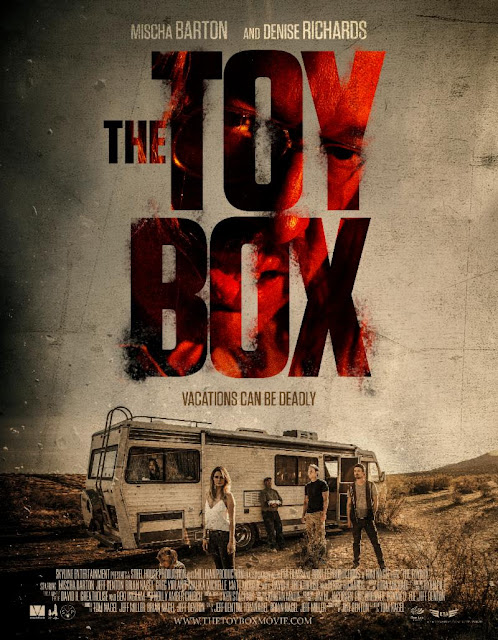 The Toybox is a supernatural horror about a haunted RV directed and co-written by Tom Nagel (ClownTown). I loved the idea behind this one so didn't hesitate to request a screener to see if it lives up to the premise. What you get here is a horror that is full of unexpected misfortunes, but which is let down a bit by the almost one dimensional characters whose reactions to the aforementioned misfortune is not what you would want.

Charles (Greg Violand - Batman v Superman: Dawn of Justice) has recently brought a used RV for the purpose of going on a roadtrip with his estranged family. His two sons unwittingly go in order to try and build bridges. These are Jay (Brian Nagel who is the brother of the director and who co-wrote the story), and his older brother Steve (Jeff Denton who co-wrote the story and wrote the screenplay), along with his wife Jennifer (Denise Richards - Starship Troopers, The World Is Not Enough), and their young daughter Olivia. Not long after picking up a brother and sister (Mischa Barton - The Sixth Sense, Zombie Killers: Elephant's Graveyard) whose car has broken down things start to go wrong. They all end up lost in the desert while looking for a tourist attraction, then Charles loses control of the RV which seemingly gets a mind of it's own and crashes. Now the group find themselves not only stranded in the middle of nowhere, but as the body count rises they start to suspect there is something very wrong about the vehicle they were travelling in... 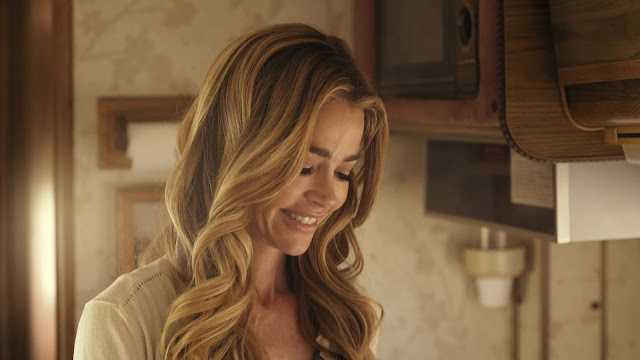 Weirdly this is the second 'group stranded out in the American desert due to vehicle breaking down' horror I have seen in a month, the last being Bus Party to Hell. This felt kind of like a sister piece to that film as where that one was about a group who found themselves trapped in their vehicle by hostile forces outside, here it is the vehicle itself which is the danger, with outside being marginally more safe for them. So the bus is evil, but it is not of itself the main villain here as various clues heavily hint towards the fact that the RV once belonged to a twisted serial killer. It seems this killer is not only able to manifest as an evil spirit (who is quite physical) but is also able to take control of the RV itself, using its limited abilities to go on a fresh killing spree, which has the added benefit of causing a series of deaths that appear to all intents and purposes to be tragic accidents. The characters are not very clued in however as up to the hour mark of this 95 minute movie most the group are still blissfully unaware the real extent of the danger they are in.

That last bit does bring me to the real problem I had with The Toybox, namely how people deal with grief here. The horror genre more than most is known for characters who very swiftly get over the death of a loved one, but with this film it gets almost farcical how quickly people recover. I think it is due to the fact that most these people are family members that made it seem more unbelievable than normal, but taking the first death as an example it must have been less than five minutes of screen time before everyone seems perfectly fine, even the guy who thought he accidentally caused it. As the body count rises we see time and time again characters who recover abnormally quickly to the most brutal and tragic of loss. I think that may be a good thing though as most the characters seem incapable of doing a realistic seeming portrayal of suffering. It might be the large open desert setting but few can resist the dramatic act of waving their hands about, looking up to the heavens and screaming in anguish, I found this quite amusing after the first few times this happened! To be completely fair there is a nice edited moment of flashbacks for one character that does prove the events of the day had affected them to a large degree. 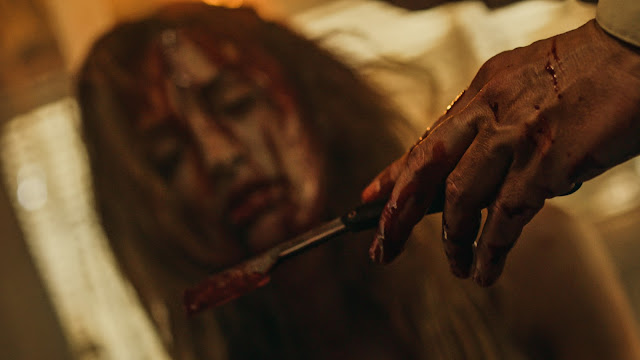 I must say though that the kills came both in inventive ways and usually completely unexpectedly without the usual signposting you would expect, as such some of these were quite awesome. There was one in particular in fact that was so sudden and so cool looking that I found I had to pause the film and go for a wander down my upstairs hallway while giggling to myself. It was moments like those that made me feel that despite awful fake feeling humans the actual horror part of this was decent. There are some nice set ups for future event with it never really obvious just who or how the next person to die is gonna go. Being able to possess an RV means heavy braking is a method used on a few occasions, but the evil spirit itself (played wonderfully by David Greathouse) also gets to cause some mischief. The RV is the main location here with at least two thirds of The Toybox taking place within its sparse confines. Horror elements include characters hallucinating various things, such as when Olivia sees a young boy (who dies in the prologue) caked in blood, or when Jennifer sees the ghostly image of a previous victim of the killer on a TV screen. The killer has great make-up to him coming across to all intents and purposes like what you would imagine a caricature of a paedophile would look like; all greasy hair plastered to his face, sweaty skin, and large thick glasses.

Storywise this is quite bare bones, the double threat of not only being stranded deep in the desert, but having your one form of refuge from the blistering sun being a literal killing machine was neat. There is little humour here, if not for the characters themselves this would be bleak as some quite dark stuff happens here. I must say I wasn't expecting as much of the cast to be killed off and so that was a nice surprise. It leads up to a sudden finale that may frustrate some in the way it occurs but I found to be a fitting end to this dark horror. 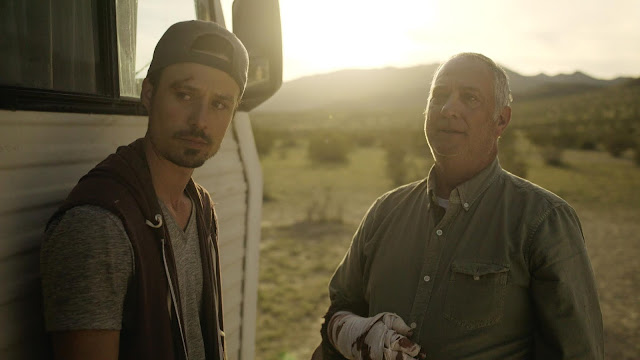 If you can get over the poor characterisation and just accept this is a horror more inclined to have fun things happen than try and make you care about anyone then The Toybox is enjoyable. My early misgivings were soon put to the side once the body count started to rise, and the effects to show these kills are not the worst. The Toybox has a limited one week run in Los Angeles at Laemmle's NoHo 7 on September 14th, then it becomes available nationwide in North America from September 18th on Blu-ray, DVD, Cable, and Digital HD.