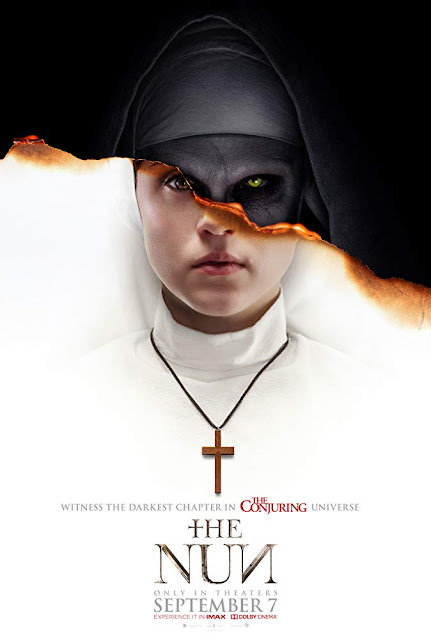 The Nun is the third spin-off from The Conjuring and is actually the fifth film now in that series following on from The Conjuring 2, the very disappointing Annabelle, as well as its sequel Annabelle: Creation. The titular character was first shown in the second film, and again in Creation and was effective in at least one of those and so I was open to what this film could be like. Unlike the mainline films that purport to be based on real events The Nun is entirely fictional, in fact it is the most unrealistic of the lot coming across like a Gothic fantasy, one that may have left the roots of realism but which is quite a lot of fun as a result.

The movie takes place in Romania in 1952 where a priest; Father Burke (Demian Bichir - Alien: Covenant, Machete Kills) and a novice nun to be; Sister Irene (Taissa Farmiga - American Horror Story, The Final Girls) head to a secluded mountainside cloistered abbey after a nun is found there having committed suicide. Father Burke has a special assignment to see if the abbey is still a place of God or if it has succumbed to evil, though he isn't given an explanation as to why that may be the case. The two soon discover that a lot of dark events have occurred at the lonely abbey and that their investigation might cost them their very souls...

I had avoided watching any trailers for this and so didn't have any real expectations of what it may be like. I actually found the more fantastical elements to be a nice breath of fresh air from the more grounded mainline films. There was a nice Gothic atmosphere that is sustained throughout, helped by the remote location that a good 90% of The Nun takes place in. While this has not scored well with critics I thought it was pretty entertaining, it has an interesting backstory, a real purpose to the plot, and features plenty of demonic possession (the demonic possession genre is a particular favourite of mine it has to be said). It also weirdly shares many similarities with video games of all things, at least to my mind. The location reminded me of both the monastery from Silent Hill: Downpour, as well as the castle from Resident Evil 4, then there is the game type situations characters find themselves in. Mysterious keys, special items, environmental puzzles, even an end of film boss fight all fed back to this feeling like a survival horror. One part that has Father Burke trying to find a way into the main abbey that has been closed off with a raised drawbridge in particular reminded me of a quest in a game. On that topic there is a sequence towards the end that felt like it had been lifted from the nurse scene in the film adaptation of Silent Hill, though replacing static zombie nurses with static zombie nuns.

And that is another break for the series, yes, there are actual honest to goodness zombies in this film! I have read criticism of the message being a bit muddy here over whether it wanted to be a paranormal film or not but with the context of demonic possession zombies make sense, just look back to The Evil Dead for reference to the validity of that one. Admittedly it does cause some problems with the film logic of what powers the evil has, as seemingly at random appears as either a physical threat or as a supernatural ghost like threat. Then there are moments where for story reasons the evil just appears to take a back seat so that characters can do plot development unhindered. 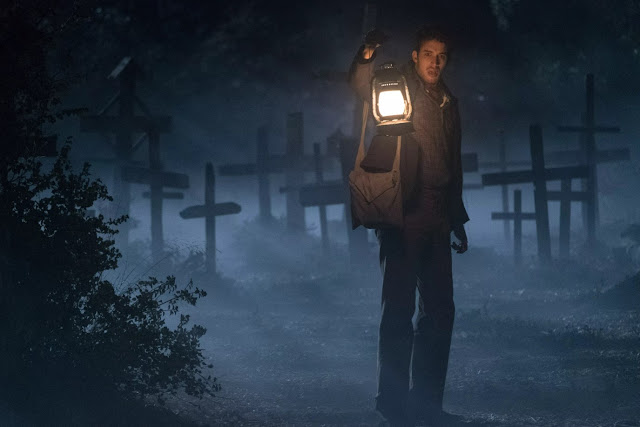 Father Burke and Sister Irene are split up for lots of the movie and get their own little stories going on. Burke is haunted by the spirit of a little boy he accidentally killed during an exorcism many years previously, while elsewhere Sister Irene meets up with the nuns of the cloister as well as constantly being haunted by the ghost nun. Sister Irene's part is by far the more interesting, I was surprised just how good an actress Farmiga is now, she has come on leaps and bounds from the last time I saw her in anything. At times Father Burke's part felt a bit lost, like they wanted to put him in some potentially spooky situations but couldn't really make the disparate elements flow together that well. Both characters discover back story in their own way, though with an almost cheesy flashback sequence to the origins of the abbey the Sister's part nabs the award for the more entertaining reveal. Added to these two is a third character, and a comedy character at that; their French Canadian guide 'Frenchie' (Jonas Bloquet). He just about to a hair's breadth stays the right side of irritating, though gets some ill advised one liners which I didn't favour.

The Nun unfortunately wasn't scary, but by this point in my horror film watching career I really can't tell if it is just me or if it is the film that are at fault. There are plenty of well signposted jump scares, but I preferred the glimpses of shadowy figures seen in the background of scenes before making their appearance, and just isolated characters walking around dimly lit locations. The location has great set design and decoration, certainly the most crucifixes and crosses I have seen in a horror film maybe ever! They are all over the place, from necklaces and wall hangings, to huge statues and graves, hundreds and hundreds of them, with Frenchie even stealing a huge wooden cross for luck during one of his comedy encounters with evil. Characters have an annoying habit of wandering off from each other for no reason. Multiple times characters unwisely decide to follow the sound of strange noises, or strange sights they have seen or heard. Then before the finale occurs the three main leads manage to get separated in quite a small series of corridors. By the end the movie has turned almost into action territory which would be a bad thing if not for Father Burke creating a great flaming crucifix out of spilt oil, and some healthy doses of Jesus blood! Plot wise though I liked the layout of this, from the prologue showing just why the hanging nun decided to end her own life, to the ending scene that takes place 21 years later and ties the movie into the core films, to a really nice mid film twist that I thought was actually pretty cool and clever. 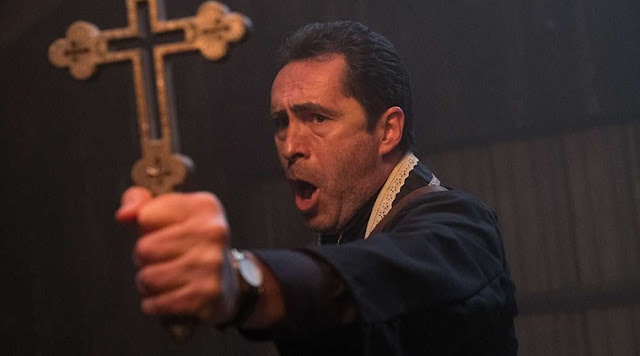 The Nun is a spin off that works as opposed to the wasted opportunity of Annabelle (who wants a static evil doll in a world that has the Chucky films?). It may be formulaic at times, it may be the least realistic one yet in the series, but it counters that by being a lot of fun to watch with only a few scenes that seemed truly pointless. As I said though, I love religious centred demonic possession films, the twisting of religion to evil was entertaining throughout, while the whole backstory explanation was lovely stuff.