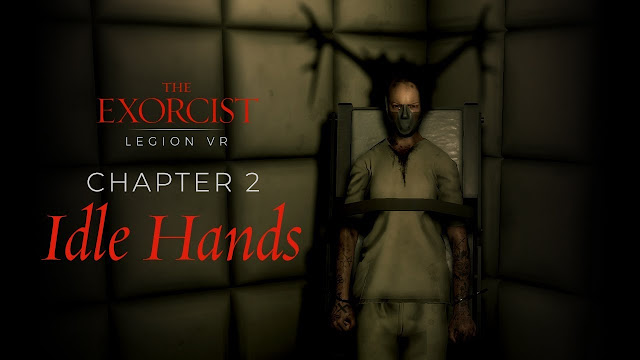 In July I reviewed the first chapter of the five part The Exorcist: Legion VR game. I felt that first chapter was a nice introduction to the game but it wasn't as scary as I had hoped, overall though I was left with good impressions and high hopes for the other chapters. Second chapter Idle Hands I really hoped would improve on the strengths of the first, but instead it plays a little bit differently, and managed to be even less scary than chapter one.

In this chapter you head to a mental asylum to interview a school teacher who went crazy and kidnapped a bus full of children. Things don't go according to plan due to evil being present at the asylum, luckily for you though you still have the handy exorcism kit you picked up at the church from chapter one. 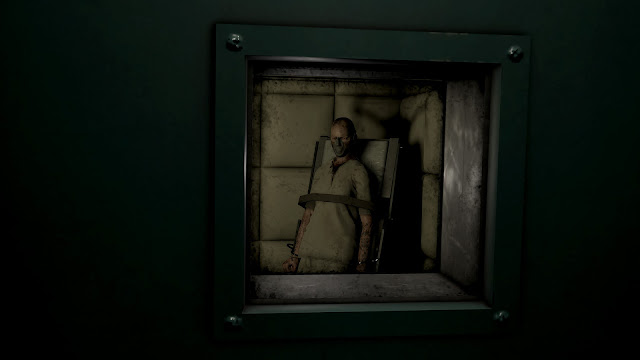 For whatever reason the controls in this game are really messed up for me and I am not sure why. I think my save might be a little corrupted but for a weird reason the left Move Controller controls my on screen right hand, and the right Move Controller controls the left. This made it really fiddly and a tad irritating to pick up and use objects. Idle Hands starts off good enough with you getting to explore a security room, it felt much like chapter one in that there is plenty of stuff to look at and read. The second half of the game has you in a long twisting corridor that has a couple of surprises, but only a couple. Like before this is quite a short experience, I was done within half an hour of starting which was a bit of a downer.

I really wish The Exorcist had actual free movement as walking around by teleporting is quite immersion breaking sadly. This is displayed very well in the second part of the game as constantly having to teleport wasn't a great way to move around the narrow corridors. I also found using items to be a bit fiddly with items jerking around when I tried to use them, though this could have been an issue with my camera rather than the game. It ends with an exorcism that to be truthful was a bit boring, I couldn't quite work out how to speed it up, or if it was even possible to speed it up. There were a couple of jump scares but only one of these actually made me shout in genuine fear. The problem with the series so far is that jump scares are the only method really used to try and get a fear reaction. There is no creeping terror like in the excellent Paranormal Activity: The Lost Soul.

I ended Idle Hands a bit deflated, it wasn't what I thought I had signed up for when I brought the series. It's fine enough, it just lacks any real scares, the graphics aren't stunning, is pretty short and has a host of wasted opportunities. I'm not convinced these bite sized chapters are an effective way of creating any kind of lasting fear. Check out my complete playthrough of it below.