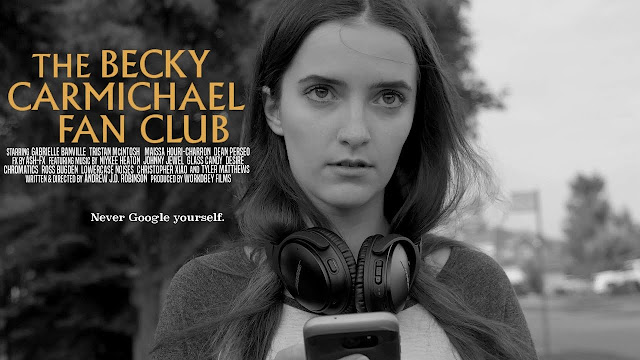 I recently reviewed Andrew J.D Robinson's adaptation of the Creepypasta story Candle Cove which at around two minutes long really was a short film. Anyway when I told him about the review he pointed me towards another new short film of his, this time one he had written himself. The Becky Carmichael Fan Club at nearly thirty four minutes is the longest short film of Robinson's that I have personally watched, and it just might be my favourite.

Jesse (Tristan McIntosh - Candle Cove) has recently lost his job and so he has travelled to his home town to spend some time with his sister Becky (Gabrielle Banville). Becky is a well known singer locally, seeming to have gotten semi famous from YouTube videos she put out, however lately she feels she has lost her gift. After nearly being attacked while walking home one night she is surprised to discover someone has been making false profiles of her and putting them on dodgy websites. She decides to get online support to help her come to terms with this form of cyberbullying but discovers not everything is as it seems to be.

This is a great short with Robinson managing to get unsettling feelings of horror from even the most benign of situations, There is a feeling of unease which permeates nearly every scene, from Becky walking through woodland humming to herself, to car rides and catching up with her brother. This is created both by the soundtrack and the way the camera work plays out. Half the soundtrack is licenced music which sounds almost like trip hop, for me this brought strong echoes of the Silent Hill franchise whose composer Akira Yamaoka heavily based his music on that genre to bring chilled feelings to unsettling locations and themes. The other half is more horror based with atmospheric repetitive clanging and droning to evoke a present sense of peril.

Half of The Becky Carmichael Fan Club is shot in black and white with the other half in colour but there is a reason for this. Like with A Plague So Pleasant something happens within the context of the short for colour to arrive, here it is for a good reason, one of the few scenes that veers towards positive feelings. This also works due to an earlier quote Becky says to her brother about darkness smothering the light in people. The change back also makes sense, I loved here how the slamming of a door snapped reality back to what it was for the character. With the editing and camera work there are some really creepy moments, slow motion is used on several occasions to really make things seem odd and wrong, like the slow motion effect of a person smiling on several occasions. In more general editing techniques the process of showing mobile phone messages as text on screen really worked well here. As an aside there was a segment from an earlier short Placebo that appears here, sure this part didn't really add too much but it was cool to see and was neatly fitted in so as to make sense.

There were also luckily some good choices when it comes to the cast, Banville seemed a perfect choice as she was able to give off a believable sense of vulnerability to her character. McIntosh is an actor that I like for the uniqueness his characters seem to have. There is just something a little bit strange about his performances which lended itself well to the role he was playing. Maissa Houri-Charron only had a small part to play as Amber but she was another good choice as featured in one of the more surreal scenes here. One small complaint I did have is that one scene that was relatively heavy ended on a musical ditty that sounded like something from a sitcom, playing as we got a close up of a characters reaction as they said a one liner, this part just felt a little out of place. I guess another complaint you could put forward is for all the build up of horror there isn't too much of a payoff, for me though the atmosphere created was well worth it and has a fun end.

The Becky Carmichael Fan Club looks at the consequences of fame, and of living life through others, while also tackling themes such as cyberbullying which are topical in today's world. This works mainly due to the ever present threat of unseen peril that haunts this throughout, a great horror short that is worth a watch.