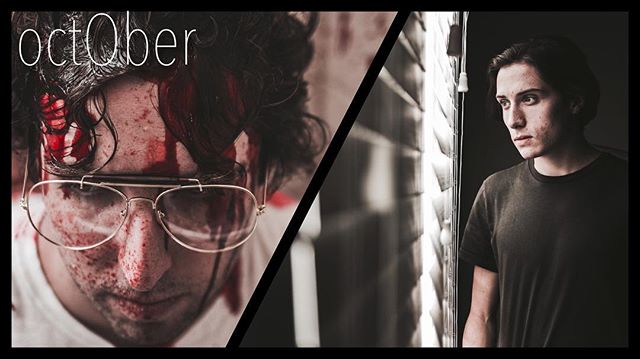 In June I was knocked off my feet by the stunning septeMber (written and directed by Mason C. McDonald) which was the first short film in a series that is to span seven parts. From the naming conventions so far I assume each part will take place in a different month as part two is titled octOber. The first film ended on a bit of a cliffhanger and so I was surprised that this one takes place some time later, with this again ending on a cliffhanger it will be interesting to see what happens next.

Two teenage friends; Alex (Brandon Allison) and Jeremy (Adrian Beck) have skipped school as Alex has something important he needs to discuss. Several years back his sister went missing and due to the police calling off the investigation he saw it to himself to try and find her. By luck he has managed to locate the man he believes responsible for killing her; Mr Wittman (Jeff Payne who also edited this short). Together the friends approach his property, Alex has lost faith in the authorities and so intends to give out his own justice...

I mentioned in my review of part one that I was concerned that having dialogue could break the wonderful spell that the combination of great directing and editing conjured up, and in a way it did slightly. Having dialogue is hardly a surprise as I couldn't envision a seven part series being totally silent. To be fair the dialogue helps fill in some of the missing puzzle pieces, such as the reveal of the serial killer's name, and just what he does in the town. I did find some of the language used to be a bit formal at times, there was a nice vibe towards the two friends though. The film is focussed on Alex and sadly I didn't find him to be that interesting a character, mainly due to how the character acts. I get that he has no faith in the police, I also appreciate there would not be much of a film he had just called them but I found some of his actions to be pretty baffling. Saying that other moments he really shines, a scene in the house felt believable with his 'fight or flight' instincts kicking in.

The serial killer was fantastic once again, there are some really freaky shots of him, but octOber is not about him so much as Alex and so he doesn't get much screen time. The contrast between septeMber where he was the lead and this means he comes across as far more of a movie slasher type figure which leads to some cool moments. The editing and directing was just fantastic once again, my favourite part being a close up of a character legs running down a railway track, coupled with the music this was perfection. I also just loved the crazy opening shot that then goes away unexplained to then show up later with context added. With the plot it was clever how this tied into the first film, it adds in a new angle to the events of that one. It was also awesome to see the end credits looked a lot better this time around, that being my only complaint with the first short.

While not quite reaching the majesty of part one this was nonetheless another great film that was a real joy to watch. I fail to see how the rest of the films in the series can be bad as McDonald is an amazing director, Payne is an enthralling actor, and all the shorts are sure to be full of stunning cinematography.