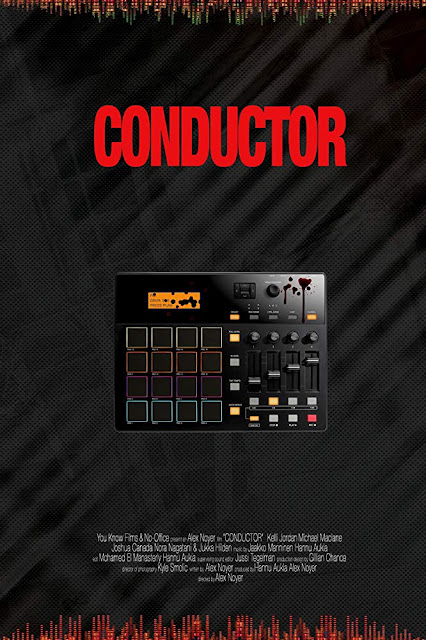 Conductor is a six and a half minute long horror that was both directed and written by Alex Noyer, it is his directorial debut. Due to the nature of this short I really can't go into much detail as it would ruin the mid film twist, needless to say this is bloody and violent and the plot fits perfectly into the allotted time frame.

Josh (Michael Maclane) is a teen who has decided to enter a competition that is going on in his local mall. The aim is to use a drum machine to make a winning beat, but his attempts are not going well, due in part to his unhelpful friend Logan (Joshua Canada), and also due to the restless crowd of onlookers all waiting for their turn on the machine. Alexis (Kelli Jordan) is a passing sound technician who seeing a flustered Josh decides to help the young man, her advice gives him the confidence to win. However he soon very much comes to regret winning when things take a turn for the horrific...

I can't talk too much about this other than it took me by surprise in the best possible way. Sometimes short films feel like a slice out of a bigger pie, or they attempt to tell a story that should be many times longer than the time given. With Conductor however this is an ideal length, it is like a Black Mirror episode in microcosm with technology used to unleash untold horror. I loved the clean sterile mall coupled with the later goings on that featured lots of great looking special effects.
I also loved Maclane's performance as the awkward mortified teen, and also Canada who was an irritating character type but in this context was pretty funny how he riffed off Josh's reactions. You could argue that elements of this are quite nonsensical, but works in the context of Noyer's vision of the consequences of the pursuit of fame.

Conductor is a short film that is definitely worth a watch if you ever get the chance to, it is bite sized enough that it is no trial to get through, and the elements of horror make this something devilishly entertaining.

WOW!!!
What a wild ride this short gave myself and friends.
Sure it's gory but its a smart story which is refreshing to see.
Looking forward to a full length film.